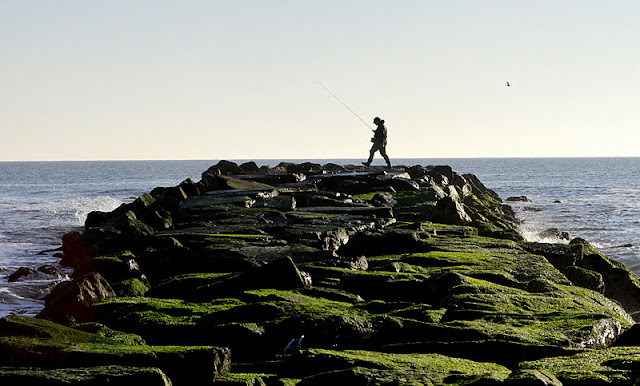 You did ever get to your spot at the wrong time and it just sets a negative tone for the rest of the outing. That's what I did today. I knew low tide was at 6:48, and that's just about when I got down to the water. There were guys on the rocks and along the beach, but there just wasn't enough water. I know some spots are low water spots, well, this wasn't one of them this morning. I fished for a while and surprisingly didn't loose my fly after getting it stuck on the submerged and visible rocks along the groin. Fly guy Joe came out  and we fished together hoping to have some action like yesterday, but that didn't happen. Nice morning, no fish for us. Although Joe wasn't finished and broke for a bite before going back at it. 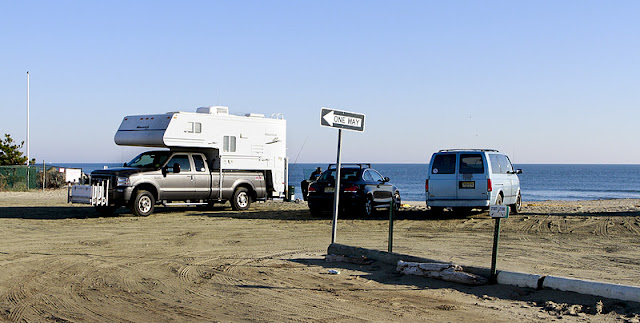 Now my angler of the weekend is the owner of the pick-up camper setup in the above picture. For those that have been to 8the Ave this weekend you noticed the two camper setups and other truck that we're in place till this morning. I saw these guys fishing yesterday before first light, and then again later in the day. Have you ever met that angler that's just dialed in and just knows his shit, well this morning after leaving Deal I stopped in and met Zoltan. Zoltan lives in Trenton and drove down Friday night and is leaving sometime today. I spoke with him and his buddy yesterday for a bit, but not like today. Today I really got a read of how much this guy knows, and I learned that by just listening to him as he talked to another angler. He fished this weekend here, between Allenhurst and Convention Hall, and caught over 60 stripers. And I believe him. He didn't fish first light after getting a nice nights sleep, or in the middle of the day when it was 55 and families were walking their dogs, he caught them at the end of the incoming and the middle of the outgoing, in the middle of the last two nights. On Friday night he caught and released about 40 alone. I talked with someone yesterday who said Allenhurst was "real good" Friday night, enough said. Zoltan doesn't keep them, he doesn't like fish, and he won't give them to someone standing next to him.
He said to me, " You can't fish when you want to fish, you have to fish when the fish want you to fish!"
There was a little language barrier between me and Z, but the message I got was clear, this guy is dialed in and thinks like a fish!
Posted by The Average Angler at 12:00 PM