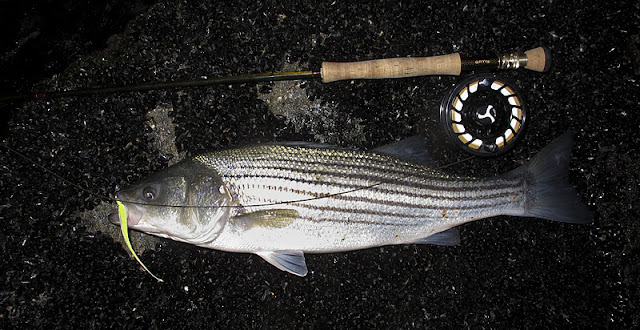 After putting in some long last couple of days stalking the beaches and groins in the area I finally switched over and fished at night. Tonight was actually a nice night, the W wind sat down a bit and the air wasn't bad at 32 degrees. I got down around 830 and caught the end of the outgoing for two hours. I missed one, dropped one at the rocks and landed the above fish just before quitting time.
With the moon almost full low tide is low, making fly fishing off the fronts of some groins more difficult than others. I found, and spoke with some other anglers, that most of the fish are being caught near or in the rocks. I am wondering if the fish are active at sundown or in the dark chasing the abundance of crabs that we are seeing on the sand and rocks. I had a great night, I spoke with other non-fly anglers speaking of 8-15 fish outings, with even higher numbers mentioned. Seems like the keeper ratio is about 1:7, but the shorts are healthy and fat. One said he swore his 20 inch fish was over 10 pounds.

The next few days should be really good..with the moon and tides falling as they are...and air temps up in the mid 40-50's...it ain't over just yet.
Posted by The Average Angler at 11:39 PM