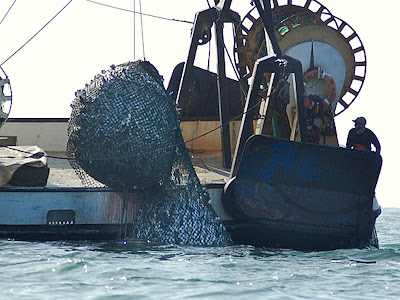 It's that time of year again. Today North Carolina is open for ocean trawler fishing to harvest striped bass. Remember last year. Images of hundreds of dead stripers floating out 1-1/2 miles off the beach.  Below is the viral video:

Because of a long-standing N.C. Division of Marine regulation, commercial fishermen are allowed to keep 50 stripers per trip, but the rule doesn’t restrict the number of stripers a boat can land, so crews are allowed to discard smaller fish while working their way toward keeping the 50 largest.
That’s what four trawlers did Jan. 16 in the middle of an estimated 100 recreational boats, fishing near Kitty Hawk, Nags Head and Oregon Inlet south about six miles toward Rodanthe.
The ocean was littered with thousands of dead stripers that had been tossed overboard by deck hands on the trawler. The kill was so large that no one, including the N.C. Division of Marine Fisheries, has ventured a guess as to its size.
One recreational captain estimated that the single-day kill of culled stripers could likely equal the entire season’s catch by recreational fishermen, who are restricted to two fish of at least 28 inches in length per angler per day. The waste enraged anglers who witnessed it and the public, which has seen videos posted at YouTube. Two television stations in eastern North Carolina have broadcast news stories about the striper massacre.
“I’m not anti-commercial fishing, but the way the law is set up now allows them to throw back the smallest fish,” said Capt. Ches Tyson of the Carolina Blue. “I was out there Friday through Monday, and (commercial trawlers) were still hitting it hard, but the waste was nothing like it was on Saturday and Sunday.”

The regulation is the boats can harvest 100 fish per day Monday - Thursday and 15 fish Friday- Sunday as bycatch. How many fish are in the net in the above picture. Remember they can keep 100, catch as many and throw back as many- keeping only the largest ones. 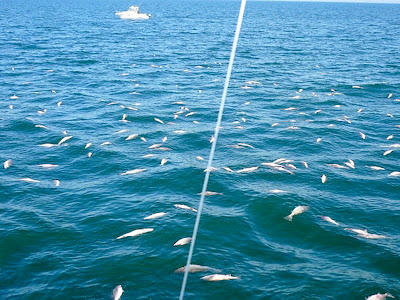 Below is the proclamation for this year, until 160,000 pounds of striped bass are harvested by the trawlers,

Dr. Louis B. Daniel III, Director of Marine Fisheries, hereby announces that effective at 12:01 A.M., Tuesday, January 17, 2012, the season for the harvest of striped bass with ocean trawls in the Atlantic Ocean waters of North Carolina SHALL OPEN. The following restrictions will apply:

I. SIZE LIMIT
No person may possess, transport, buy, sell, or offer for sale striped bass less than 28 inches total length taken with ocean trawls from the Atlantic Ocean.

A. It is unlawful to take or possess striped bass from the Atlantic Ocean in a trawl operation without having an Atlantic Ocean Striped Bass Commercial Gear Permit designated for the trawl fishery except in accordance with III.C. below.

B. It is unlawful for a holder of an Atlantic Ocean Striped Bass Commercial Gear Permit designated for the trawl fishery to land or sell more than 100 striped bass per vessel per day.

C. Harvest of the 100 striped bass per vessel per day will be allowed each Monday through Thursday until the quota of 160,160 pounds is caught.

D. It is unlawful for a holder of an Atlantic Ocean Striped Bass Commercial Gear Permit designated for the trawl fishery to land or sell more than 15 striped bass per vessel per day on Fridays through Sundays as a bycatch allowance.

A. For purposes of this proclamation, a trawl is defined as a net made of multi-strand nylon consisting of wings, a body and a codend.

B. No gill nets may be possessed on board a vessel used in the taking or landing of striped bass.

IV. LANDING RESTRICTIONS
Striped bass harvested in this fishery may only be sold to and purchased by a currently licensed finfish dealer possessing a valid 2011/2012 Atlantic Ocean Dealer’s Striped Bass Permit.

A. No finfish dealer may possess, buy, sell or offer for sale striped bass taken from the Atlantic Ocean without first obtaining a 2011/2012 STRIPED BASS DEALER PERMIT validated for the Atlantic Ocean from the N.C. Division of Marine Fisheries. Dealers must abide by all conditions of the STRIPED BASS DEALER PERMIT and the general permit conditions found in NC Marine Fisheries Rule 15A NCAC 03O .0503.

B. Only a STRIPED BASS DEALER PERMIT validated for the Atlantic Ocean may be used for transactions involving striped bass taken from the area opened by this proclamation.

C. Striped bass lawfully sold to a permitted dealer may be resold to a non-permitted wholesale or retail market provided the initial permitted dealer records their dealer identification number on each bill of lading or receipts involved in the shipment of striped bass. Any individual or corporation who holds a current finfish dealer license must obtain a STRIPED BASS DEALER PERMIT validated for the Atlantic Ocean in order to sell any striped bass personally harvested.

VI. SALE TAGS
No finfish dealer may possess, buy, sell or offer for sale striped bass taken from the Atlantic Ocean without having affixed either a North Carolina Division of Marine Fisheries-issued Atlantic Ocean striped bass sale tag affixed through the mouth and gill cover or, in the case of striped bass imported from other states, a similar tag that is issued for striped bass in the state of origin.

VII. SEASON CLOSURE
The ocean trawl season for striped bass will close by proclamation when the harvest quota is met.

B. It is unlawful to violate the provisions of any proclamation issued by the Director under his delegated authority pursuant to N.C. Marine Fisheries Rule 15A NCAC 03H .0103.

C. The intent of this proclamation is to allow the commercial harvest of striped bass from the Atlantic Ocean by traditional gears within the 480,480 pound quota established for the 2011/2012 season by the Atlantic States Marine Fisheries Commission Fishery Management Plan for Striped Bass.

D. Federal regulation 50 CFR 697.7 (b) prohibits anyone from fishing for, harvesting, or possessing Atlantic striped bass in the Exclusive Economic Zone (EEZ).

F. Permits may be obtained from all North Carolina Marine Fisheries License offices.

G. All striped bass taken during season closures and all undersized striped bass shall be immediately returned to the waters where taken, regardless of the condition of the fish.

I. Holders of Recreational Commercial License or hook-and-line fishermen must follow the bag and restrictions of the recreational fishery for striped bass.

Posted by The Average Angler at 12:01 PM