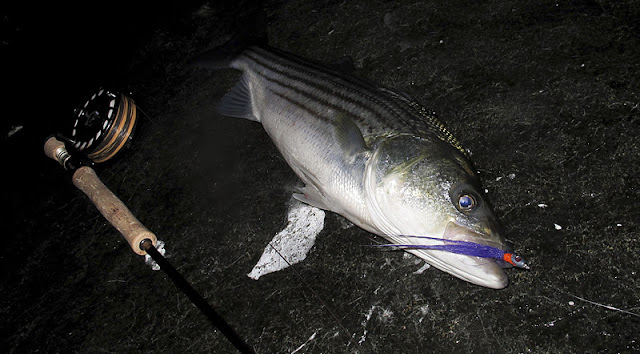 Incredible night striped bass fishing tonight. I got down just as the tide started to move out. There was one angler in place and he had landed almost 20 fish with several double headers on a Bomber/ Teaser combo in about an hour. We had the groin all to ourselves. I moved past and on the first cast landed the above fish. Then another spin guy came in and on his first cast on a black Bomber he landed a 35 inch fish. He caught several more but left with two. Then it was a pretty steady bite for about two hours. My buddy Joe came down, without a tip from me, and he started off quick with the fly also. In a little while it was just us able to work without worry of our backcasts hitting anyone. The fish were tight in the rocks and out about to 40 feet. I switched over from one fly I tied today and put on a very large fly that I also tied today in an attempt to get a large fish fish to bite. I broke my ass several times going out further and further on the rocks trying to get a shot at bigger fish on the prowl. As the tide ebbed it was hard to tell a fish's strike and the fly line and or fly catching the rocks.
I just enjoy fishing, and catching is great too- but the numbers we had tonight were crazy. Between the four of us we landed over 40 stripers, with the largest caught by the spin fisherman.I missed or lost a dozen and I know Joe had the same. The picture below is the guys big fish, with my fly reel used for scale.
For Joe and I several of the fish we caught were like the one below, although I had one to about 25 inches and Joe's was 27. I wouldn't have believed this night if you told me it was going to happen. The last week or so has been my favorite part of this years run, or whatever this is.

Posted by The Average Angler at 2:19 AM