From all of us at the The Average Angler Merry Christmas and Happy New Year. Santa Claus, aka my brother, hooked me up with a pair of spikes for my waders. So next season I can fish and not break my ass on the vaseline covered rocks of the jetties along the Jersey shore. Remember we have fly fishing packages available for the 2010 season for any last minute gift needs you might have.
Posted by The Average Angler at 9:48 AM 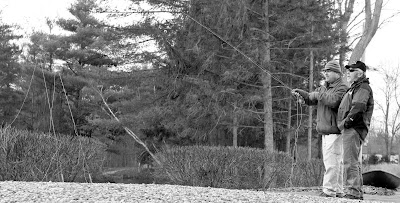 So yes I cleaned my gear out of Bertha. I went to the last meeting of the year at the Jersey Shore Trout Unlimited on Tuesday. Guys went around the room talking about the wrap of striper season this year...and basically everyone said it stunk. That made me feel a bit better. Today, with the temperature around freezing, I met up with my casting coach Jim Valle for another lesson. Todays lesson was really good. I had practicing everyday and was at the point where I needed some intervention. I have been putting cones out in the street where I live and casting for accuracy and distance. Right now with my 9' 5wt I can pick up and put down 50' of fly line, plus the leader. Jim watched me cast and we went into the double haul, a cast I have been working on. This part of the lesson was great. He left me with some great tips that I will practice on my own. With the bad weather coming in and the holidays I won't see him till the show in Somerset, where hopefully next year I'll be testing for FFF Casting Instructor!
Posted by The Average Angler at 9:10 PM 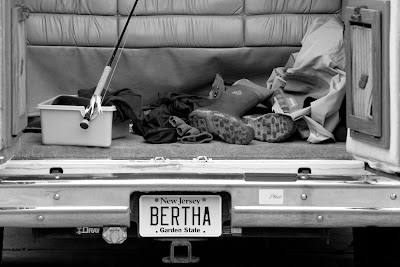 I think it might be time to call it a season. This morning I went down to 8th Avenue to see if there was anything going on. Today the top of the seas were calm. The only thing I founds were the gannets doing their divebomb into the ocean to catch fish. Watching those birds is amazing- they get up about 100 feet above sea level, dive down up to 100 miles per hour and plunge into the sea to catch fish, or parts of fish. The other day the bunker was as far a the eye could see, but outside the jetties and just past the sand line caused by the recent hard weather. So as a fly fisherman I think it's over. Even during a huge blitz the other day, and a bunch of boats parked in it, there was only one fish caught and it was on a half a bunker that had just been snapped and chopped. So I reluctantly will put away my gear, and maybe set my sights on a quick trip up to the Salmon River later this month or in January. Yesterday I took my NJ Boat Safety class, this week I have a casting lesson with Jim Valle, and then in January it's the fly fishing show in Somerset.
Posted by The Average Angler at 11:50 AM 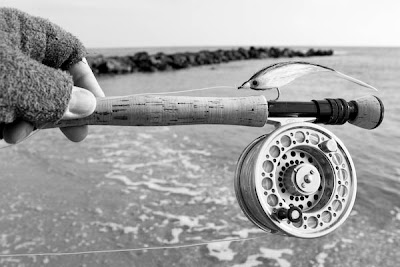 I decided to hit the beaches since I have been away for a few days. This morning around 9 I headed into Asbury Park to the 8th Avenue jetty. As I was pulling in, three trucks were tearing out of the parking lot and guys were scrambling for their bikes. They were all headed down 4th Avenue, near Convention Hall. There was a HUGE school of bunker that easily went for 6 blocks and fish ripping through them. They were too far out for the guys on the jetty but a few boats were on them. Anglers out there were snagging bunker and live lining or throwing out chunks. The small army of us on the beaches would drive and stop, drive and stop as the fish moved south. I spent the most time in Ocean Grove waiting for the fish to come in closer, but no luck. In the end we stood on the Fletcher Lake flume, between Ocean Grove and Bradley Beach and waved to the fish as they continued down the coast. One of the guys said he got two keepers at 8th Ave around midnight on a black bomber. Maybe I'll give my brother a shout and hit it tonight, hopefully before the rain moves in.
Posted by The Average Angler at 1:12 PM 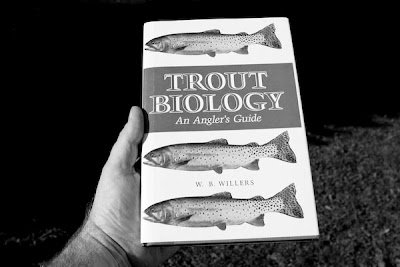 Came out west for the weekend with Cindy. We stayed at the York Street Inn, a wonderful B&B located in the center of Lambertville. While we were there we booked the place for a September 2010 wedding. There a tons of shops and I found a few old bookstores. I collect fly fishing and trout related books so I was hoping to find something. I found this great book, Trout Biology, An Anglers Guide by W.B. Willers. I also picked up one of Lefty Kreh's books and a book on fly fishing for bonefish. I am starting with the trout book and will get through the others after that.
Posted by The Average Angler at 1:07 PM 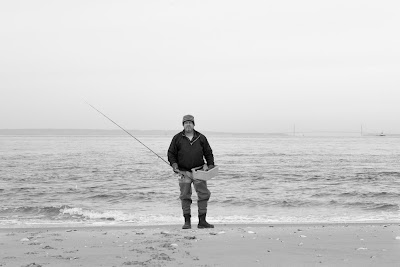 Started the day in Asbury Park. Nothing going on. Stopped in Deal-zilch. Elberon-nothing. West End-zero. Monmouth Beach-birds off the beach diving. Stopped for a great bacon, egg and cheese on a hard roll in Sea Bright- beaches were dead. So I figured I would drive up into the Hook and go to North Beach. When I first got in there were a bunch of cars in Lot A so I pulled in, geared up and hit the beach. There were about 10 guys spread out- but nothing going on-they said there was some earlier action but no one landed any fish. I decided to drive up to the Coast Guard station and hit the tip of the Hook. I was the only guy there. I walked from the bay side over to North Beach. There was a nice wind coming from the west but no fish, no birds, nothing. But I have to say for about an hour and a half I just enjoyed fishing, well, casting to nothing. It was good practice and a good workout. After a few hours I started that long trek out. A ranger stopped to check on me and any short fish I may have had-ha! He said there was some action down in South Beach as the fish were gorging themselves on sand eels. On my way out I stopped and talked to some guys who packing up in the South Beach parking lot. Yep-there was a blitz-probably just out of my casting range- and a bunch of short stripers were hooked, landed and released. As I left that wind turned and was coming from the southeast, with some rain and nasty weather behind it.
Posted by The Average Angler at 8:21 PM

I have sat on a river for hours, many hours waiting for a hatch they may or may not have come. This striper fishing, is well, just crazy. I see the same guys almost everyday doing the same thing. Pulling up, getting out, looking through their binoculars, and then either parking and getting geared up or pulling away. There are so many variables in this sport, and I am still learning them. Let me name a few, fish, bait, location, wind, water, temperature, moon, tide, boats and birds. A seasoned striper fisherman will surely be able to complete the list. This fall I have been at it since September when trout fishing slowed down, that was the tail end of the albies. Then I walked and stalked the beaches from Asbury Park to North Beach on Sandy Hook. I have seen one good blitz on Sea Bright, right up on the beach, that I was 500 feet away from when the fish and bait turned right out to see, and Saturday at 8th Avenue in Asbury Park.
I have seen a few keeper stripers and some big blues- mostly caught on bunker chunks. Right now it's a waiting game to see if the bait and fish are out of the rivers, off the beaches, or just plain south of us. Some reports from weeks ago said the fishing from Point Pleasant and south, mostly around Island Beach State Park and LBI was good then, and now its getting better south near Cape May.  Other guys saying it might be a late bite this year, into late December or early January. So with all of that I continue to sneak down to the beach looking for the birds, the bait, and the fish. All the while dreaming of Hendricksons in May on the West Branch of the Delaware.
Posted by The Average Angler at 10:20 AM