Since this is a fishing blog and I haven't been fishing in the salt in about two months and not since Leif and I hit the Delaware in early August here's a quick update before things get going in the salt in September.... 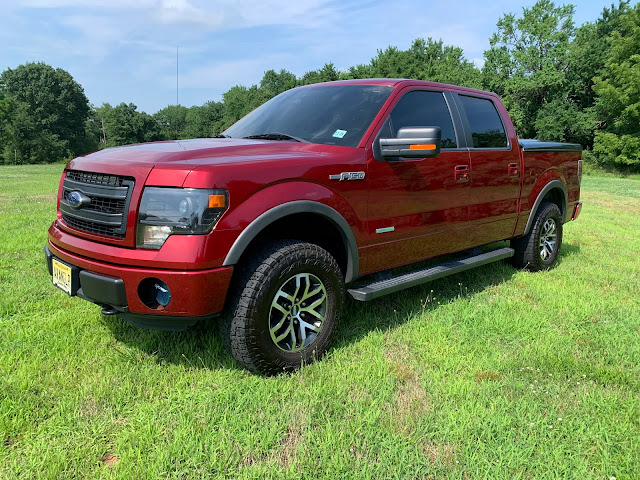 Friends and clients have seen me evolve over the years in my rides. Never new, not always practical, sometimes a money pit, but always leave me attached to them full of good memories either towing a drift boat, my Jones Brothers, walking clients, or my wolf and kids. My latest purchase after Ryan died in late 2017 was a 2014 Ford F-150. Funny, I never knew how desired Raptor rims were until I owned this. I Ama truck driver guy, but not a truck knowing guy. People ask me engine specs ect. and I have no idea. What I usually know is the monthly payment and insurance amounts each year.
I got the truck with about 35,000 miles on it three years ago, in August it hit just over 120,000 miles. I figured it was time to move it before there was no value in it and things would start to go. I put it on Facebook Marketplace, which to me is more addicting than Tic Tok to a kid. I put it up for $18,500 and after the buyer, who took an Uber down from Totowa, pointed out an oil leak we settled on $18,000. That took about 2 days. 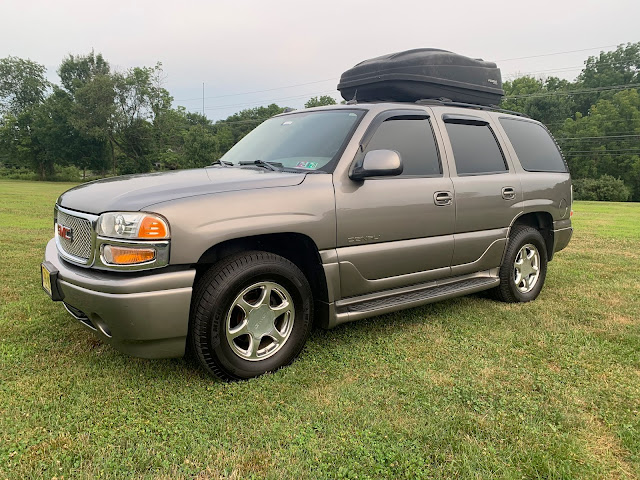 Just to note, a lot of these moves happened at the same time. So, I sold the Ford and found a 2005 Yukon Denali cross the river in Pennsy. One owner, a military man, old school, took real good of his vehicles. He was asking $6,995 and had recieved several lower offers. I offered $7,000 if he would throw in and mount the cargo carrier on the roof. Deal done. 152,000 miles. Hope she lasts. Love her so far. 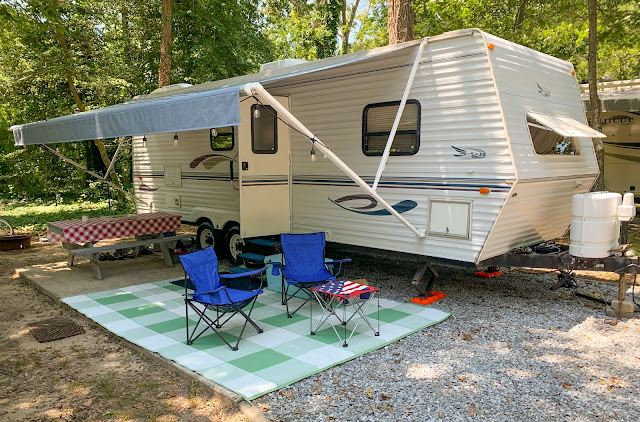 And just before all of that we were at Holly Shores campground in Cape May, well just north of Cape May on Route 9. This years things were a bit different with Covid 19, but we still had a blast. One thing about having a camper, for me. I hate looking at it in my driveway/yard for the 50 weeks a year we didn't use it. So, we started looking into keeping it down there year round and even started looking at the Park Model homes that they had on site. One day after I trekked back home to see patients, Theresa found another seasonal place right at Exit 0 called Cape Island Resort. When I got back we stopped at the gate and arranged a drive through, within 500 feet we were sold. So, back to Holly Shores, clean it out and up, take some nice pictures, put it on FBM, sold within a day. $5,000. Bought it for $3,500, used it for two years, one of out better moves. 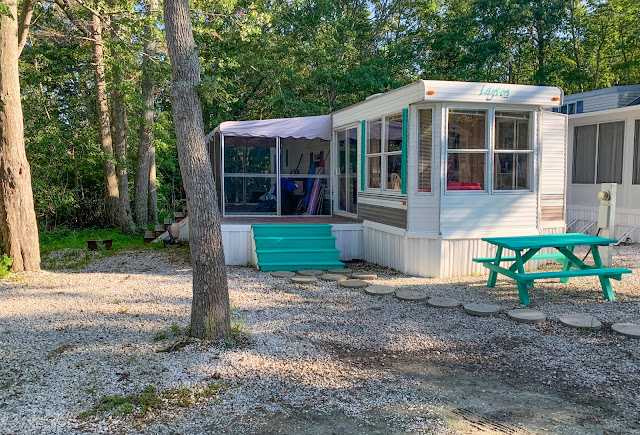 So now we go through Cape Island looking for a site to park something. We drove around the Cape May area checking out campers for sale. The ones we liked went for $17,000 - $22,000. Again, either trailer it home or pay for a seasonal storage. The front desk had given us a list of private owners selling their Park Model homes. Park Model homes, are well trailers, not ones you to around, but can be towed into a spot. Cape Island is all trailers, no renters, no in and outs, you put it in, you and your family stay, period. There are a lot of rues, which I like. So the list went from $8,000 up to $65,000. The first was sold the next one was $15,000, and after that $24,000. So it was a no brainer for us, $13,000 and we have "a summer home in Cape May". A 2004 Layton on the top of Bennet Creek in the Cape May Wildlife Management Area. Right away we went to work. Ripping up carpets and a new floor and some freshly painted steps. Its a place to go and use from May 1st- Nov 1st. We've been just about every weekend since. 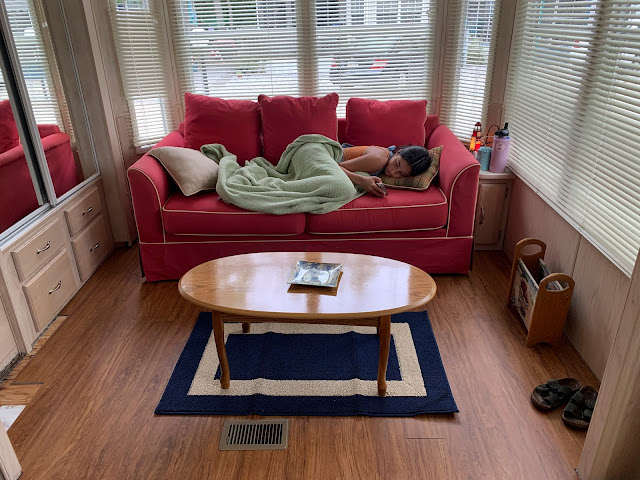 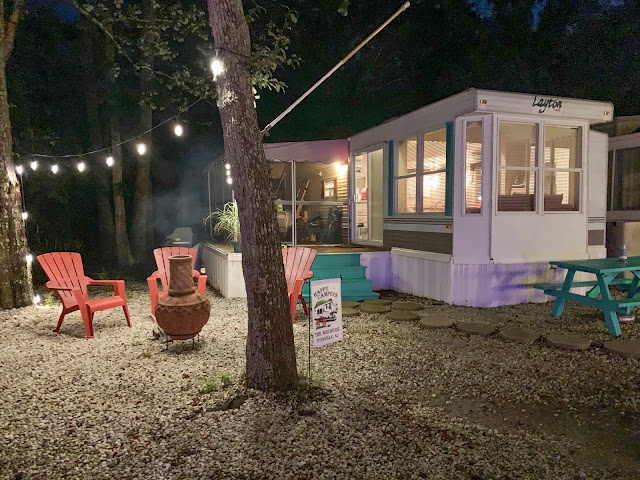 Above is the night hang....
So $23,000 in, $20,000 out. A man needs a pick up. To be honest, I loved the newer Ford, but I was never comfortable in it. Too nice, too clean, to much nausea every time I put something in the bed or went to the dump. A scratch would make me feel faint. So I found this beauty in town. A young buck, freshly graduated form University of Colorado Boulder had her up for sale $3,000. He drove it back and forth, he took care of it, he loved it, and for $2,000 I love it now too. There are no interior door knobs, the interior is a mess, but she runs solid and has a cool look to her. This may be the vehicle that drives those walk and wake clients round, or tows my next boat to the ocean.....more on that later. 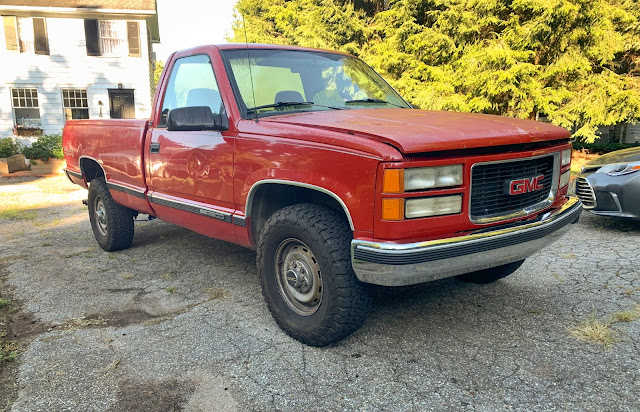 And on the home front my chicks, now full fledged chickens, are dropping eggs. There are delicious, "meatier', and I love having them. Thanks to mom and out neighbors for keeping an eye on them while we're down in the Cape. We started with six, the fox got two, but I think four is a good number for us. 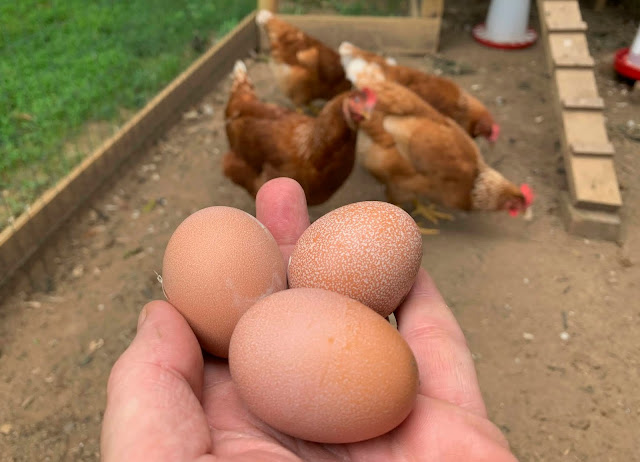 And then there is school. First year doctorate program at Villanova. Second class in. I wasn't checking emails and they moved the semester up three weeks. My classmates emailed last week and said 'Where are you", my answer "Driving to the Cape"....."um we have class". So I have to quickly get on track and am thankful to a very understanding professor who cut me some slack. 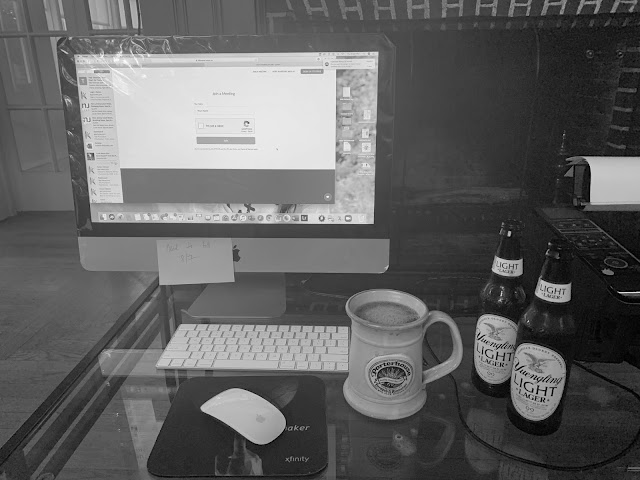 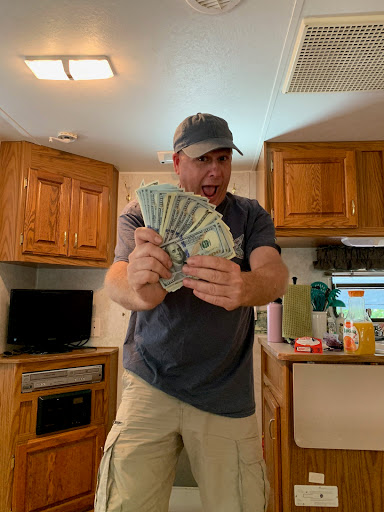 And then there's that last $1,000. I snoozed and lost on this little garage kept gem. It was $1,500 and would have been perfect for me and Theresa to do the Delaware River in front of our house, even in skinny summer water. But it's gone, I couldn't fir the ride to Lancaster in and someone got it. Wasn't meant to be.
Maybe what's meant to be is another Jones.........stand by 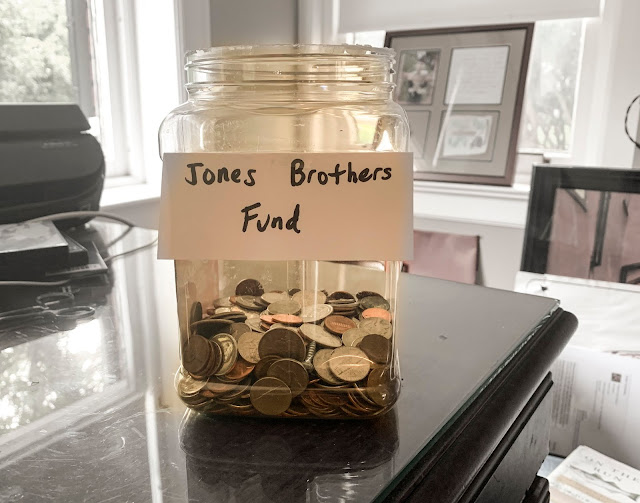 Posted by The Average Angler at 8:44 AM 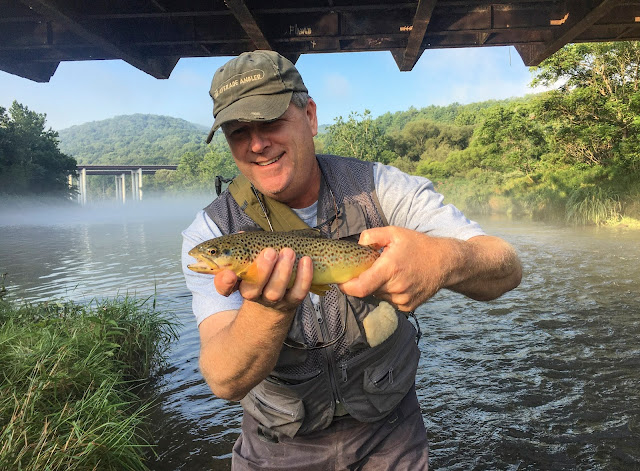 Spring 2020 will always be remembered for the Covid-19 pandemic. My memories of springs past always included either trips to the Upper Delaware alone or with friends or nights spent sleeping in my truck or bumming a couch when I guided up there. Each return trip has me visiting those good times, either nights of too hard a hang, great clients, great or no hatches, and the best fish brought to net or the one that got away. 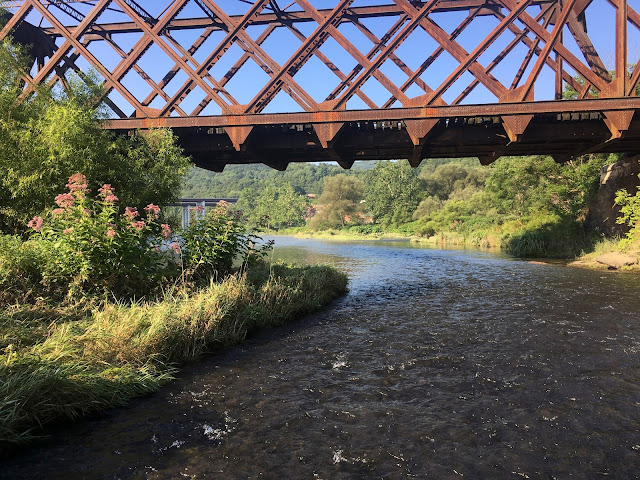 This spring I didn't make it up there, missed my favorite hatches, the Hendricksons, Quills, and the March Browns. After selling my drift boat last year, which was a mistake but had to happen to raise cash to start the practice, my desire was a little bit off, not to mention I took a gig at the Covid hospital in Edison. 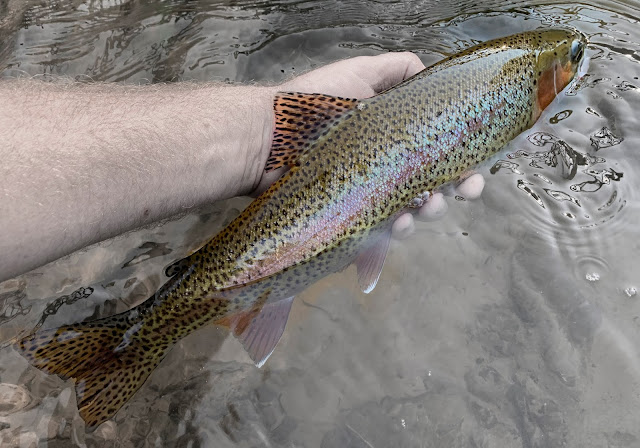 So when Leif and I were talking we thought about running up and back, but decided on a two nighter at the West Branch Angler. We'd go mid-week to lessen seeing other anglers, as we knew the only game in town was the West Branch, where the temps were holding at 50-60 degrees. There weren't many fish to see or catch, mostly small ones that showed splashy sulphur emerger rises. Most of the fish came on small streamer and Wooly Bugger type flies. We wanted to just head hunt, but no fish got into a rhythm. 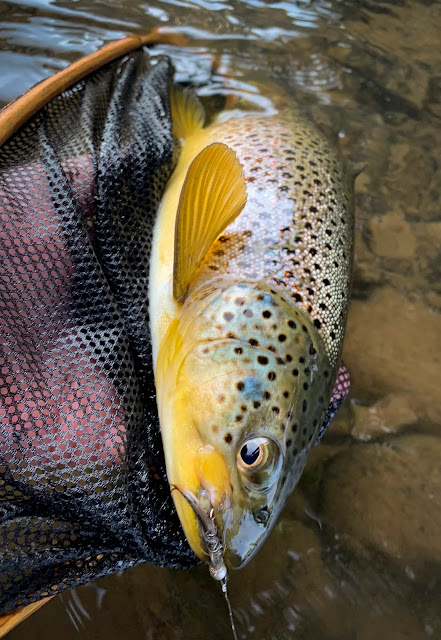 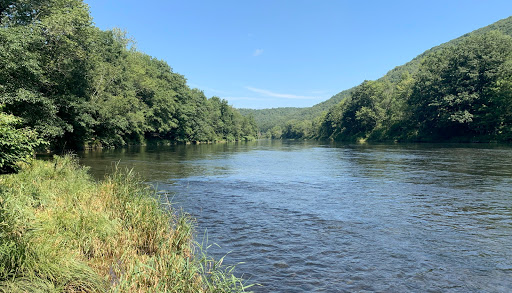 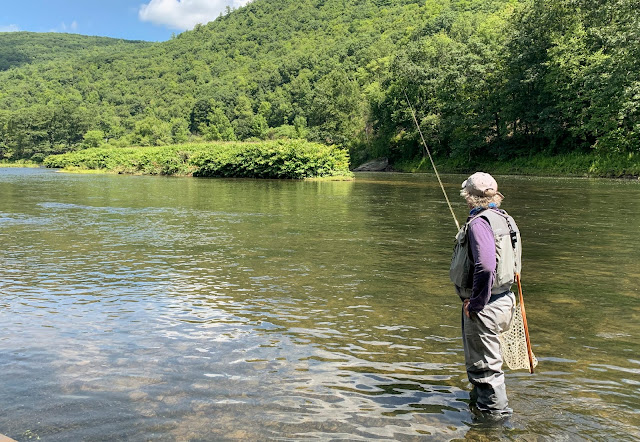 While the Upper West had the lowest temps and busiest fish, we did venture down in the early morning to the Lower Gamelands. Leif found a run that held a lot of small fish while I trekked upstream looking for a steady riser. 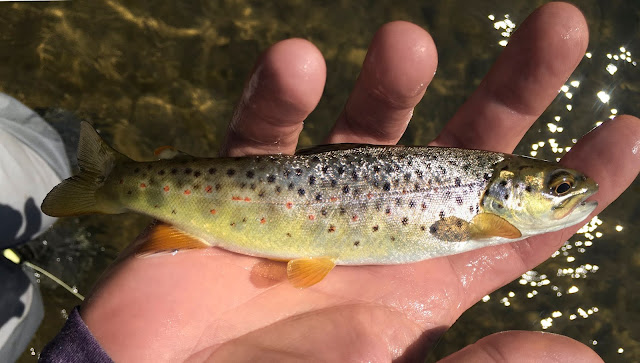 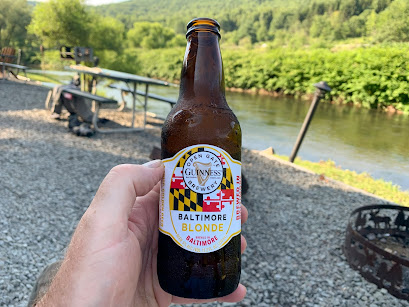 Few highlights were just being away, being up there, finding a new cool access (which isn't good for thatspot or the fish), and good times with a friend and a great meal. It was filet mignon and lobster tails followed by a few Guinness Blondes 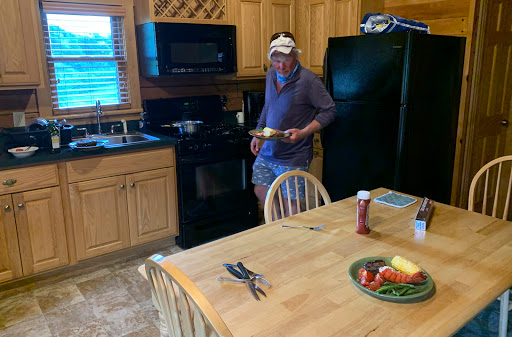 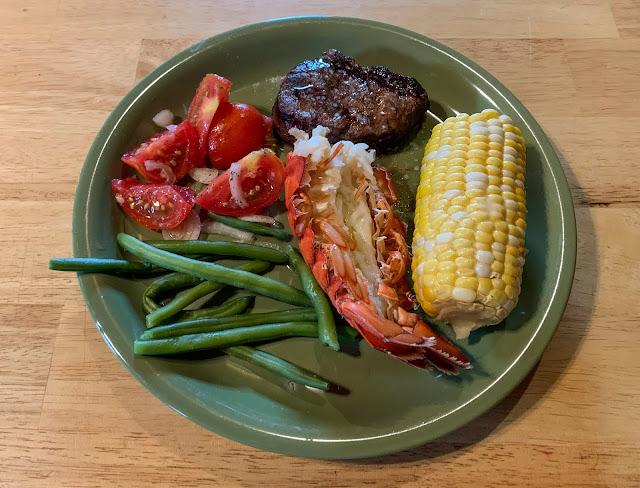 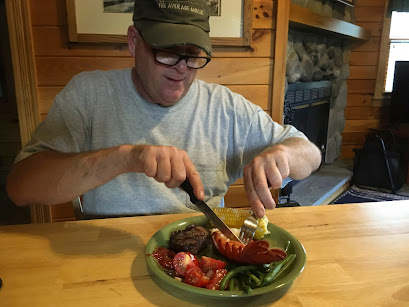 After the last supper we gave the evening a try. Thinking we'd find some garbage pickers or streamer eaters into the night never materialized. I even had a large mouse fly to chuck to big browns but after an hour or so without a take and following a quick little squall we called it a night. I always leave there reconnected on how much I love that place, and surprisingly, how much I can love it with big gaps between visits or not on the oars taking clients down one of the rivers. 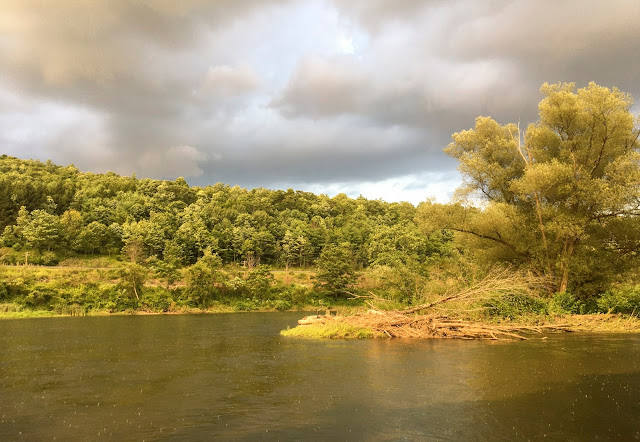 Posted by The Average Angler at 8:04 AM