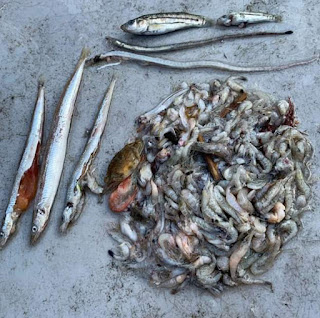 So as a fly fisherman, well I guess most fisherman, you try and match the hatch, or at least have some idea what the bass are eating. Frank R. from down south was fishing the back bays in early December and caught a keeper for there table. He shared the stomach contents on Facebook after cleaning the fish.

We see it ate some sand eels and what looks like a killifish or maybe a small weakfish?, not sure. But what I was amazed at was the amount of grass shrimp that were in its stomach. While I know crabs and shrimp are staples in their diets I wouldn't have guessed that in early December shrimp would be on the menu. I guess that shouldn't surprise me though as I heard that the two keepers caught along the Jersey Shore beaches this fall had a mix of sand eels and sand fleas in them.

As far as a report. Well, I am done two weeks ago. Here some guys here and there catching the 20 inchers depending on the day, time, and tide. If you are new here make sure you go to The Fly Fishing Show thats coming up in January. It'll feed the fix and break that long gap till April-May. 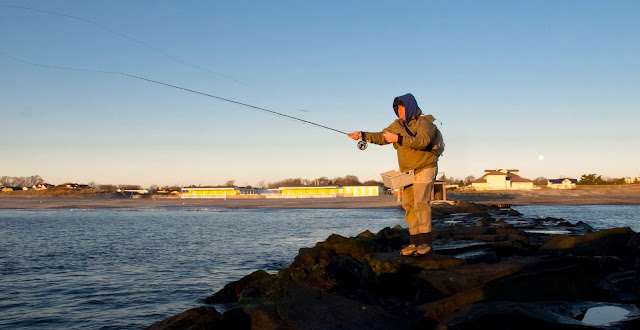 I have to say thats one thing I like about Facebook. Every now and again an old post will pop up telling you about a post from days past. This one popped up yesterday of a cold outing from seven years ago this week. You can read the old post HERE. Funny thing is I wonder who the no show friend was, I bet Richie.

And whats sad about that post is that guys were still catching fish, and keepers as well. If you look at the above picture its Deal back in "its hey day" when there was still a pier on Phillips and a place we called "The Hump". Lots of good memories and times there.
Posted by The Average Angler at 7:48 AM 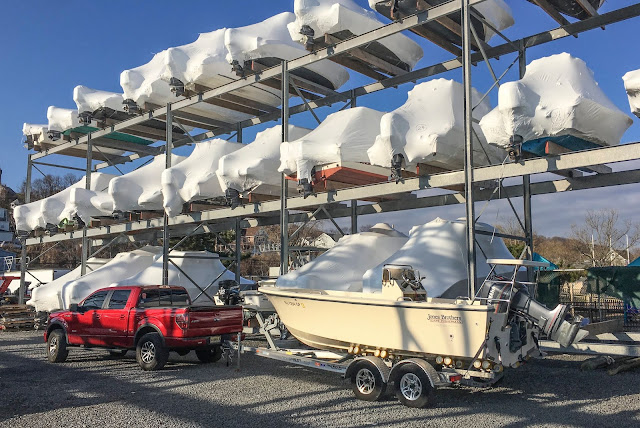 I guess now moving forward I should plan on posting weekly. If people know there's a post a week maybe they will continue to come- so let's figure you should check each Friday- that's not saying there won't be more posts in between, but by Friday there should be something up. It will keep you into the game since "its over" now, and at least for fly fishermen, and it won't start up until April at the very earliest. In 2019 I'll be taking my drift boat in front of my house for some spring Delaware River stripers! 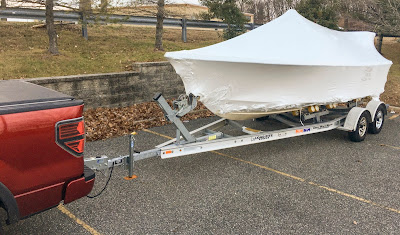 On Tuesday I got down to Atlantic Highlands Marina and picked up the boat and brought it to Gateway. Within a day it was winterized and wrapped and ready for its new winter home in Titusville. I did hit the beach afterwards for about an hour and found no life. Water was high, annoyingly all over the place due to beach replenishment and then an angry Mother Nature who tries to take it back. You couldn't fish a trough with a fly rod if you wanted to. 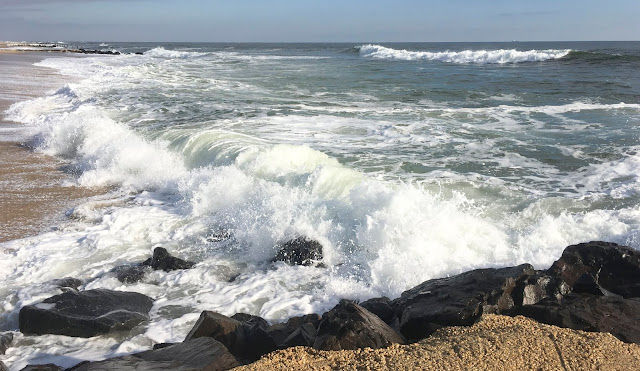 Lots of white water that started at the lip and then rolled up the scarp to Ocean Avenue. So either you take a beating, have your fly washed up or left and right, or try and catch fish that are buried in the sand. Just for the record......I'm done for good for 2018. Quit number two I think. 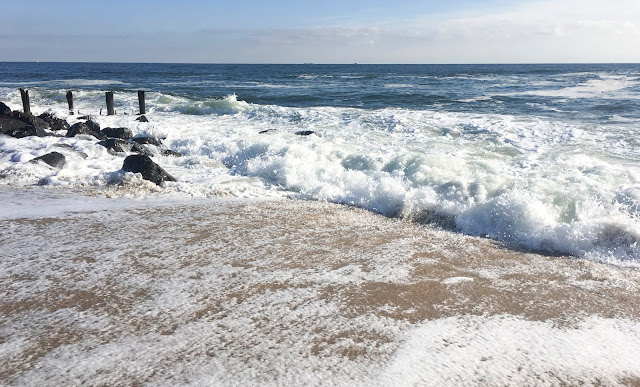 I am also done with school this semester!! Took my 4-1/2 hour final Thursday night. I'll still have clinical through the holidays but won't return to class until January 23rd.....then its only a few months until I AM DONE in April. Tossing around the idea of going right into a doctoral program. Any pause and I might just lose momentum. Problem is my student loans are up to $85,000 right now- not sure what Dave Ramsey would say about that.

My buddy Paul from Reel Therapy was out yesterday and found some fish a little south. The weather is nice enough so while it might be "over" its still fishing and good for the mind and soul . 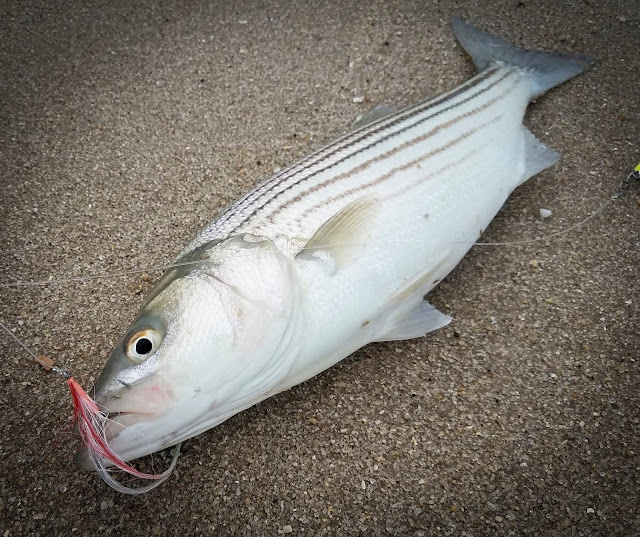 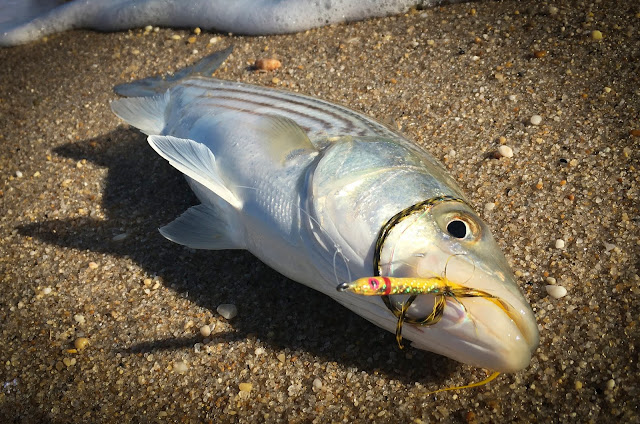 ...okay so I pulled the trigger a little quick yesterday. After school drop-offs I hit the local beaches. Cold, wind blowing, not much protection from the NW. Didn't see much. My mission today was bring the boat from AH marina to Gateway for winterization, however the hitch I had from the camper, more on that later, was too big. Have to do that next week. 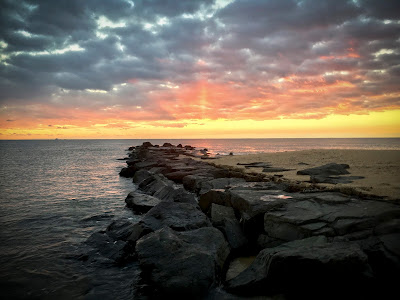 I hit up a few buds who said they were into them good at sunup. One on the fly rod the other using a spinning rod. So, still having my stuff in my truck, and realizing it just may a first light bite, I decided to give it a go.

When I got there there was a few guys fishing and I walked to fish alone. One guy walked down to me and caught at least a handful on a small rubber shad. I was using a chartreuse/ white sand eel and just when I thought about switching up I went tight. Nice fish, good fight, I decided to change up 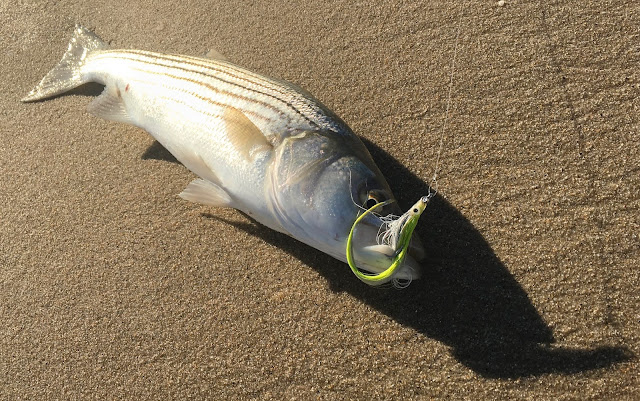 anyway. There was some whale action, with no birds diving, so my intention was to maybe entice a bigger, keeper sized, fish into eating. That never came about. I made a move and went back to the 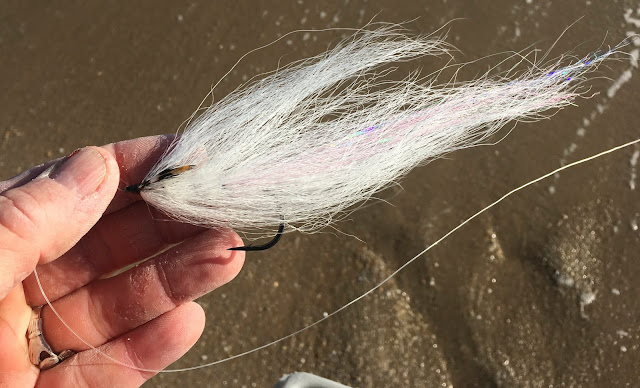 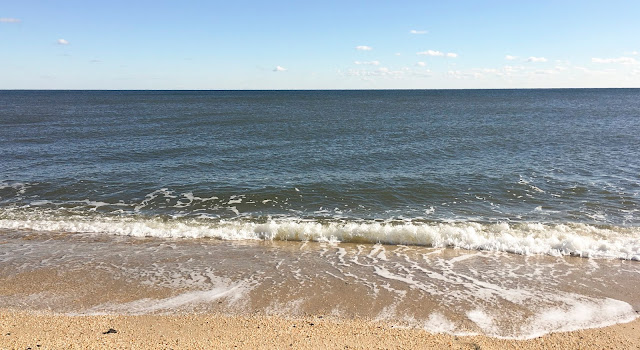 sand eel imitation and found a honey hole where three came pretty back-to-back. The water on the ebb was pretty boring and after seeing Leif's first light pics I wish I was there. It was pretty but I bet pretty cold too. If this is it, which I think it is, it was a good way to end, at least getting a half a dozen to hand. 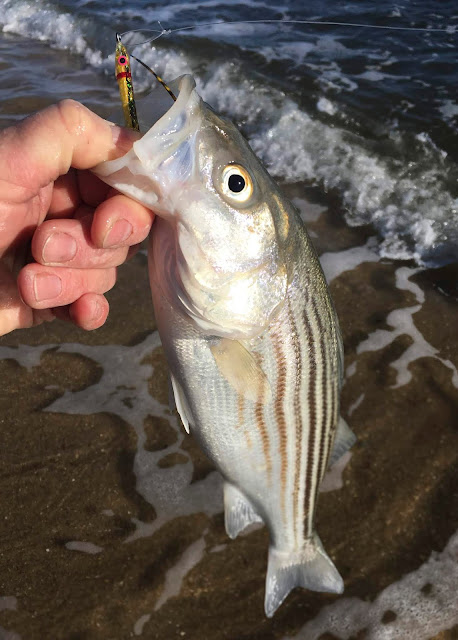 Posted by The Average Angler at 1:05 PM 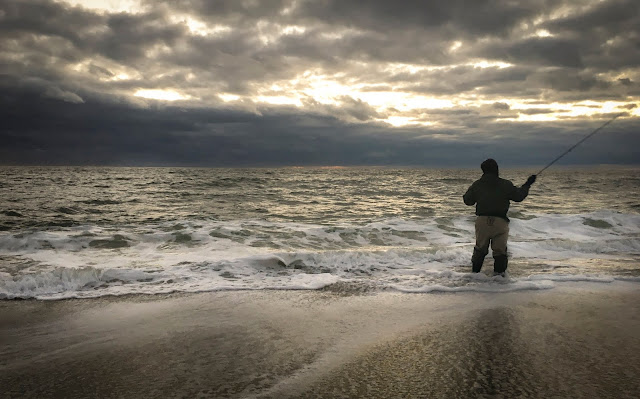 .....Quit #1. I'm done. Season predicted just as I expected. No "peanuts in the back", no "big body of fish in Long Island".....what did happen was the sand eel bite that mostly would/will happen in Ocean County. So, and after todays finger numbing shot I'm done. 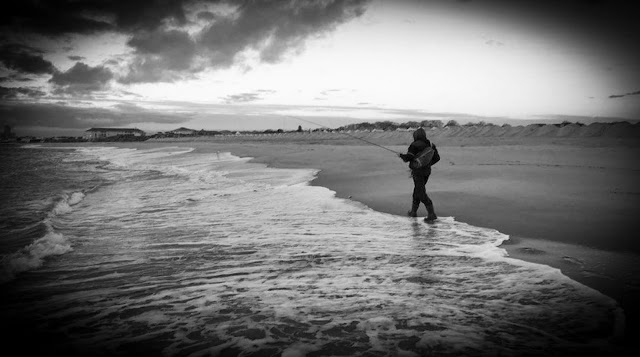 Okay, maybe not, but I hope so. I usually quit three times each winter. Got down around 6 and met up with Leif. Nice 28 digress, wind NE, not bad surf, just no fish. I fished for a while and made stops at Long Branch (x2), Monmouth Beach, Sea Bright (x2), and the Hook (x3). Not a tap on the end of the incoming and a few hours on the ebb. 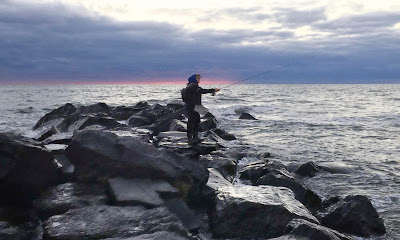 The Hook looked the most promising as the birds were active both diving and looking. I feel good with being done, almost relieved its over. Ocean County is your best shot for fish now.....before that "big body" arrives. 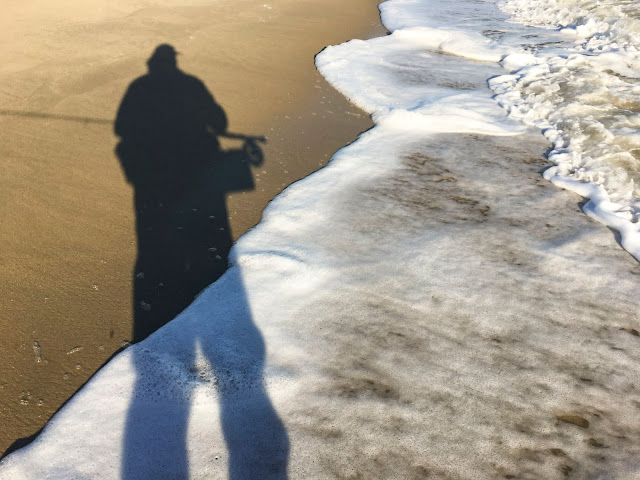 Posted by The Average Angler at 9:13 PM 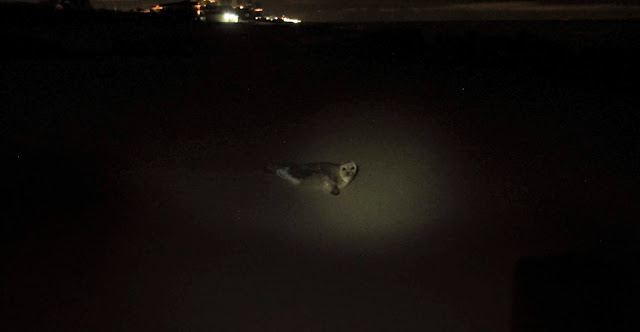 Gave it a go on the end of the outgoing for about an hour. Couldn't find much water. Saw this dark "thing" moving long side me and turned and found the above friend sliding down the beach. Game, set, match.
Posted by The Average Angler at 10:14 PM 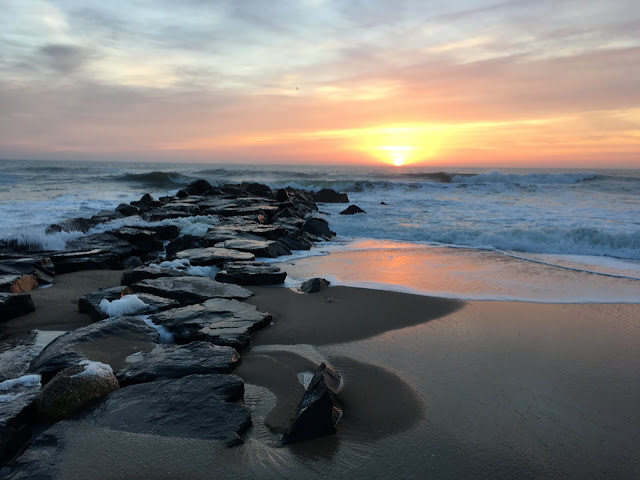 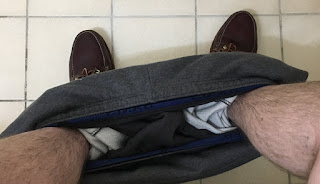 Made the early trip from the west and got down to the water at 640. Beautiful water. Lots of it white. Outgoing tide. Big waves breaking on the trough. I lasted about 20 minutes before I felt that outing-killer-rumble in my lower intestines......later, got to go. I wish I was able to hang around and bet about 9am it was really good for the fly rodder. 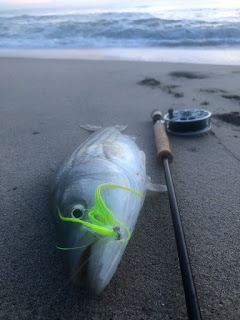 I spoke with a buddy who got five a little north before he had to go to work. At 55 degrees on December 3rd who can complain as long as there is something biting. 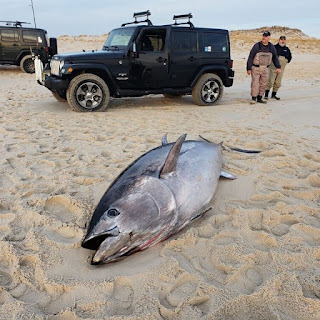 There was a little surprise, well a big one, when an alive bluefin tuna washed ashore down on IBSP. I wonder if it was in on the sand eels and got caught up on a tide or was sick or injured and just gave up. And more about big surprises is the beast caught down in VA, allegedly 75 pounds. 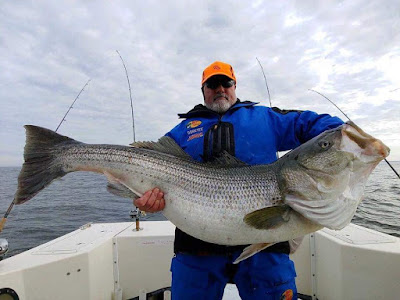