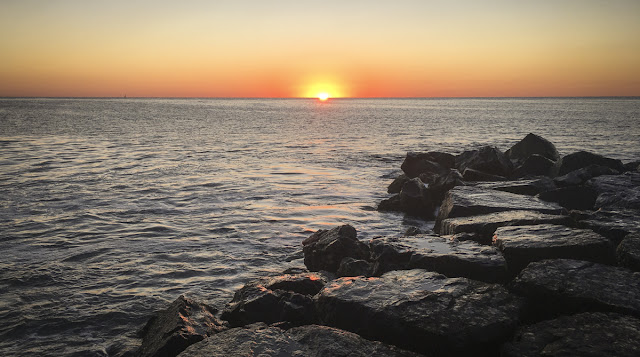 Fall just wants to arrive . Up at 250 and on the water by 4am. 56 degrees, with water temps low 70's. Tried the popper on the incoming in the dark and had a bass jump it but didn't hit. Leif and fished without a tap till 7ish which was very disappointing. It was a mullet looking morning but there was nothing in the illuminated waves. 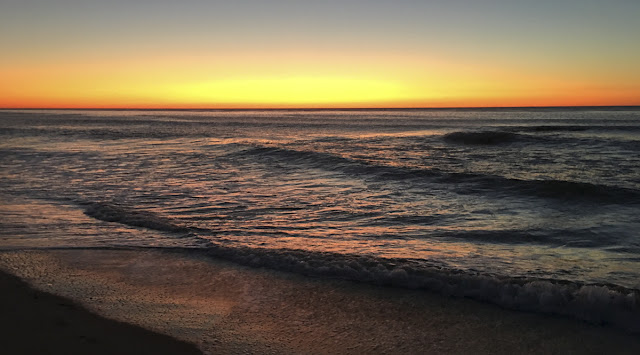 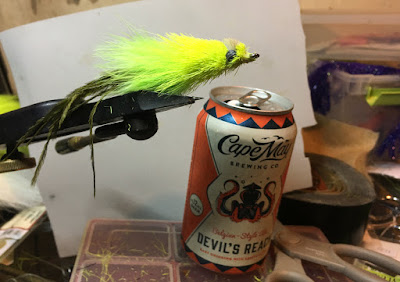 I tied up a go to fly last night that wasn't go-to at all. I tied it with a few Cape May Brewery "Devils' Reach" in me....which is why it looks messed up. Below I tried a panoramic shot and either I moved or the swells from Hurricane Dorian are starting to show on the horizon. Next outing will be in September with a trip booked next Sunday with a visitor from the U.K. Got to find them and get it done......maybe early albies?

Posted by The Average Angler at 6:19 PM 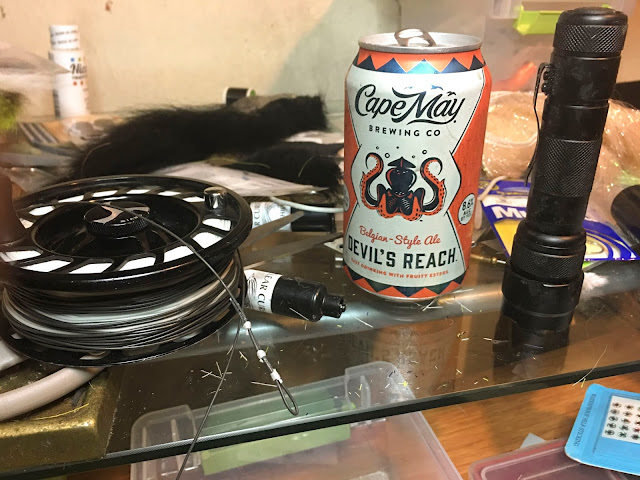 So as usual Leif keeps me in the know with fishing conditions, catches, and the proverbial big one that got away. He, as always, puts the time and and pounds sections until something gives in. We've had a slower summer than past ones, usually early morning poppers and crab flies would be very productive for the bass that decided to hang around the Jersey Shore for the summer. Not so much thus year. There are some fish around, rooting around for crabs and white bait out front, on the worms at night near the dock lights in the Manasquan and Raritan, and even on the Navesink, where the water is dam near 80 degrees. 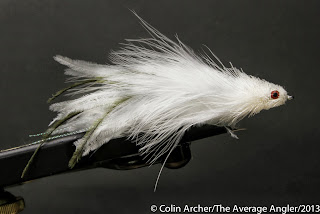 But generally, bass fishing is way down, from south to north, from in (the big rivers) to out front, its just bad, and sad. With fall around the corner we wonder what will this year bring? Mullet, yes. How good? Who knows. Could be just like years past. Good mullet, good bass. Good mullet, almost good bass, Nor'Easter shuts it down. Bad mullet year, good bass. Or now......jut bad bass. 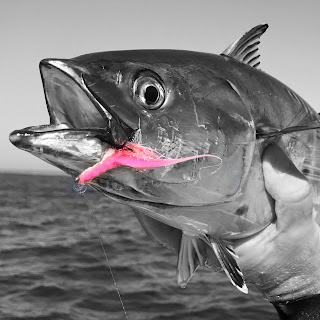 So right now we have Spanish Macks, bonito, and even cobia around. Thinking this fall will be more of an albie run than a bass run, no surprise there. Last years albie fishing was off the charts. Not only albies, but good sized ones. Last year I had an "epic" day on the boat with Joe with bass, big bass, 20-30-40 and 50's blitzing big bait that required big flies and strong rods. That may still happen once a fall but its not the norm anymore. 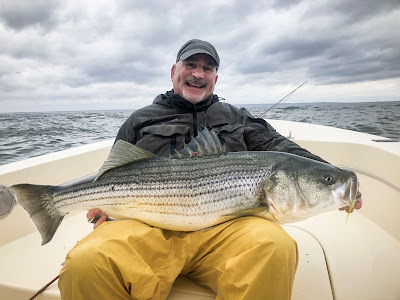 Sand eels....nope. When I think sand eels I think 2011....yes that year. That makes me sick thinking of the IBSP massacre I saw on many days. It seemed for a while it was on-year off-year with peanut bunker and sand eels.......my prediction is not this year. 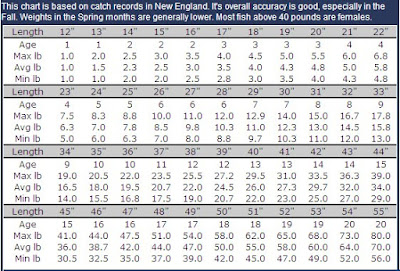 summer, and this fall that is the only hope of saving the striped bass. Speaking on that, the ASMFC has just released their options to save the bass from extinction. Public comments, not letters, will be heard soon. Just an FYI......its already been decided and the fix, as usual is in. The numbers, the data, have been skewed and the manipulation of those numbers and the reductions for recreational and commercials are a joke. Here's what funny guys.....

Lets say that for years hunters were allowed to kill two deer each per day. They took them by gun, bow, even falling from trees and stabbing them with Bowie knives. But, over the years the deer got smaller and in less numbers. The hunters and hunting guides kept at it just thinking the deer grow under the trees. So the deer managers did a survey and found that, in this area of the state, there used to be 1,000 deer per mile, now there is only 250. The hunters still hunt with the same bag limits as before.....businesses down and freezers less full. So the managers decide "to do the right thing". No more two deer a day, only one now, and it has to be a buck and it has to have 6 points. Guys, reducing the limits of striped bass in both sectors is a f-ing joke when the bio-mass and YOY surveys show there are less striped bass. YOU MAY BE KILLING MORE BASS EACH YEAR PERCENTAGE WISE!!!!!!! And the end of the story is.....hunters started targeting squirrels. 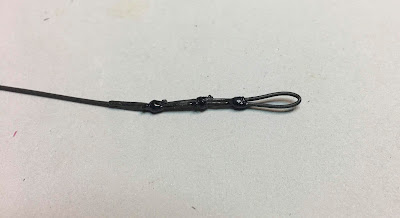 So I went fishing. Got my lines all juiced up and repaired a welded loop gone bad. I even tied up a "special" crab fly that was sure to work. Got down in the dark and started with a popper, dual baitfish fly in black and purple, white popper as light arrived. Then went to the secret weapon. I fished two stretches, twice over the end of the outgoing and incoming tides. Good N wind, nice sized swell, lots of white water....nothing. I was really looking forward to catching a striper, in August, on that fly. I might have one more shot on Monday. 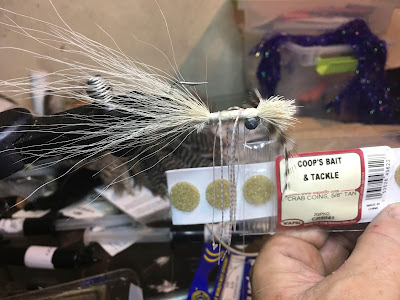 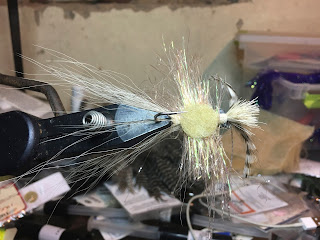 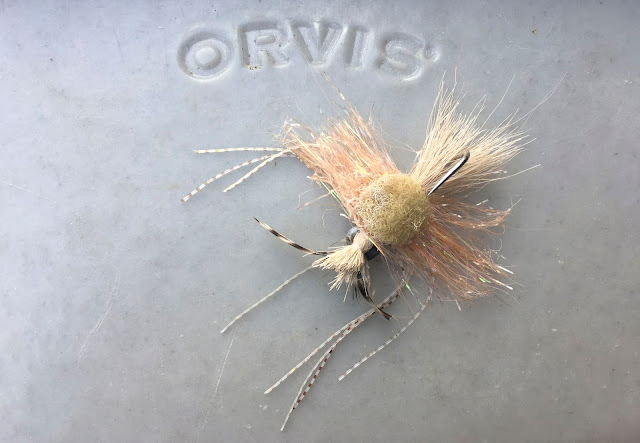 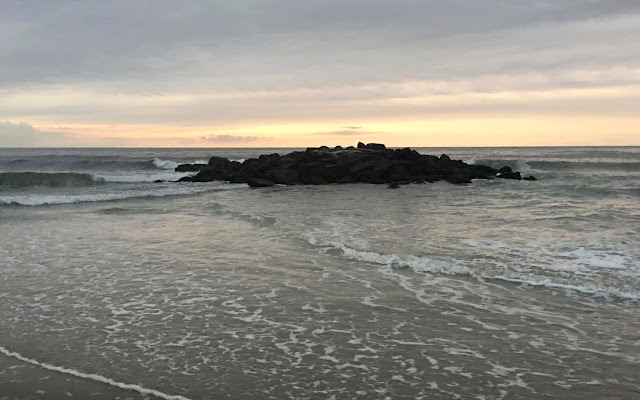 Posted by The Average Angler at 7:00 AM 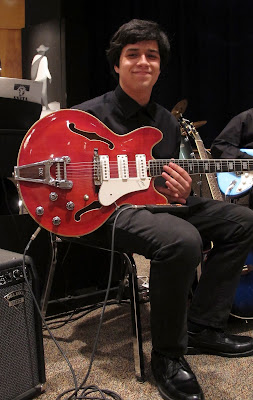 Ryan was born 23 years ago today. Your children's birth is one of the happiest days of your life, and their death one of the hardest to swallow. Lately I've been missing my boy more than I have since his death almost two years ago. I don't miss the memories, those are good, I miss what could have continued to develop between us, and in him as a man, as he conquers the challenges in life. He surely was such a smart and talented young man. 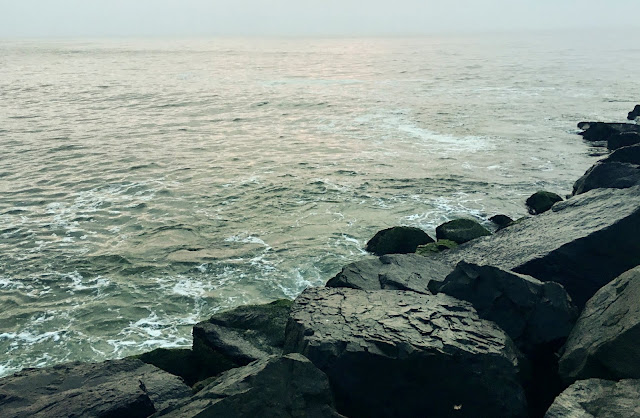 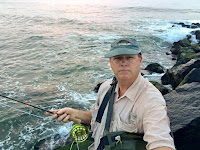 So I made my way down to the beach and to Phillips Ave where I had spread his ashes nearly two falls ago. There is a rock I have named "Ryans Rock" because it was there where I stood and let him be carried by the wind into the ocean as "Blackbird" played on my phone. I remember the first day I went down to the beach after his death and it was a spectacular sunrise, today, not so much, but I enjoyed the moment, and the song.

I haven't posted here in a bit because luckily after passing the board exam we took the family on a few trips, one in July to the Adirondacks staying in a house on Lower Saranac Lake and one down this past week to Cape May in the camper. I have been talking with some of my buddies who have fished regularly and its the normal summer bite, mostly short fluke, a bass or two, tiny blues, and then a surprise ray or Spanish mackerel. Yesterday I fished the incoming and had about 10 fluke with the biggest being 17 inches. 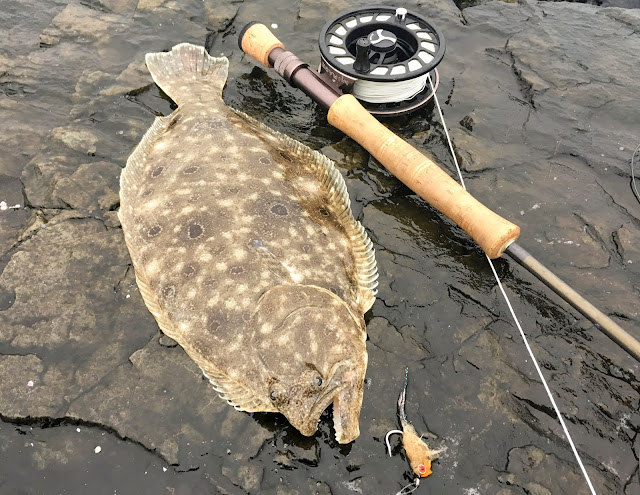 I am looking forward to the fall run and in about a month the mullet run should begin, I just hope the bass follow. Last years mullet was that good, and as always, if it is, it could be interrupted by the fall Nor'Easters, which we definitely need to cut up the shoaled up beaches from the constant south winds and littoral current running south to north. Its a good time to book a walk and wade trip in order to be ready for the good (I hope) fall fishing when tiny baits are moving along the beaches and the bass, blues, and albies are in pursuit. 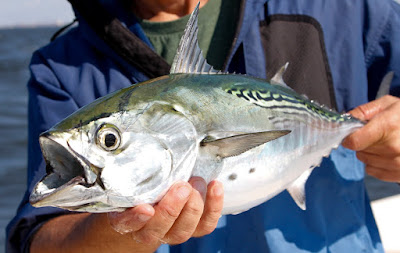 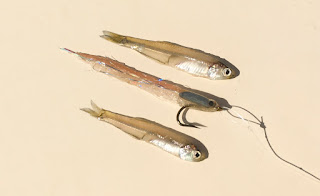 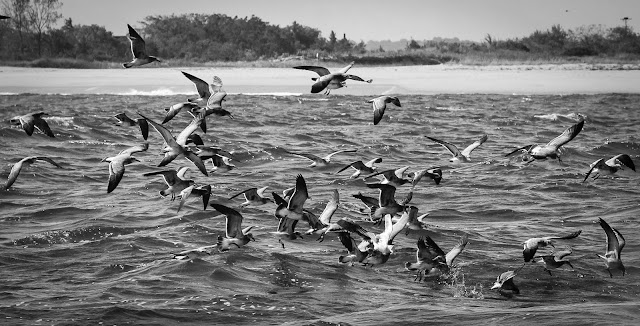 I am ready for the albies to start invading and if you haven't fished for them, or caught them on a fly rod, then call me to book a date. Its chasing birds, throwing tiny flies, and reel screaming action taking you into your backing. even if you don't pick an actual date, I can put you on the "albie" list so when they come in I can call and get you and a buddy out there. I will be fishing the beginning of the fall running boat and walk and wade trips until my new office and practice are set-up and ready to start accepting patients, which should be mid-October. Call, text or email me. 732 261 7291
Posted by The Average Angler at 9:54 AM