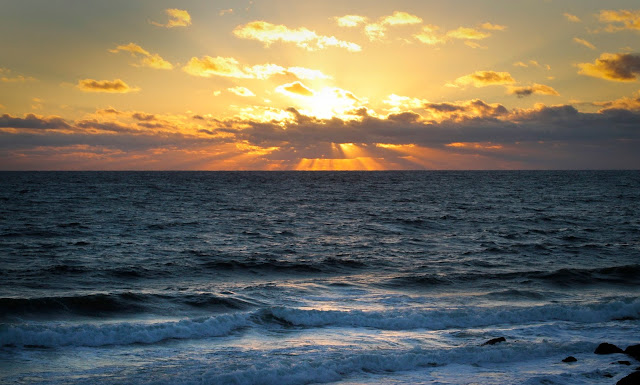 It was blowing out there this morning. NE 10-15 was more like 15-25. Didn't even make a cast....some fisherman. I did do the Sandy Hook to Allenhurst tour and only found a handfull of guys out, most soaking clams.
There has been some great fishing up and down the Shore- you just have to be at the right place at the right time. This years peanut bunker run has been really good, hopefully this little blow won't shut it down. It's still a bunker fishery now but it is what it is.
Posted by The Average Angler at 9:24 PM 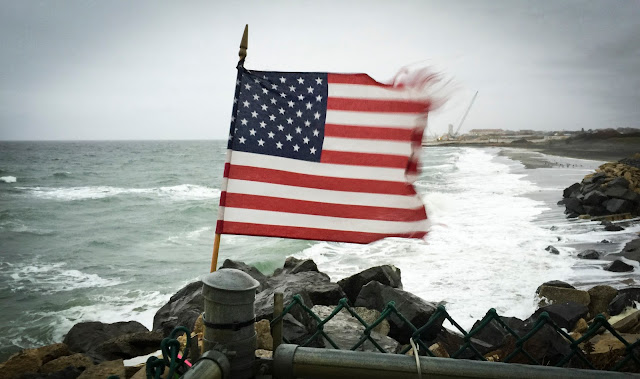 Knew thing would be a littler snotty than yesterday but didn't think this much. Got down in the dark and was met with E winds to 20 at the top of the tide. Spent a few hours looking and making some casts and then driving up and down Ocean Ave. Hit the usual towns Bradley, Asbury, Long Branch before settling into Deal. Saw a guy get two back to back blues to 10 pounds in Long Branch. Not much for birds and couldn't see the bait in the big waves and white water.
I decided to hit what was once one of my favorite places to fish. Phillips Ave was always a stop, to either scout, stop and talk to friends, or hit the pockets at the start or at the end of an outing. From the below view all looks normal, but behind me wooden ramps and heavy machinery littered the beach. I was fine as long as I looked out. I fished the north side pocket which now has a long outflow pipe paralleling the rocks. I didn't get a tap all morning and it wasn't easy getting the bigger fly to where I wanted it.
I heard yesterday was real good with mostly big blues chasing peanut and adult bunker off and onto the beach. Also heard there were some bass mixed in. This morning looked great and I didn't want to leave but it was just time to go. 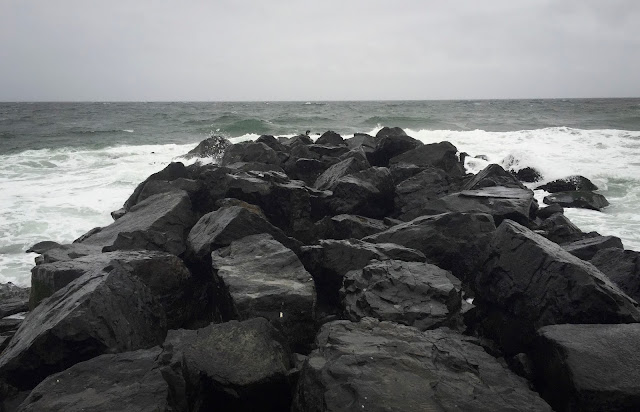 I got a kick out of seeing the footings being prepared for the old fishing access at Roosevelt Ave. One might say that it's good, for me I am suspect. Recently Deal has tried to limit access to the beaches along town and seeing this makes me worry that they will say, "We have improved limited public access" and the DEP will go along with future plans to essentially shut access down. 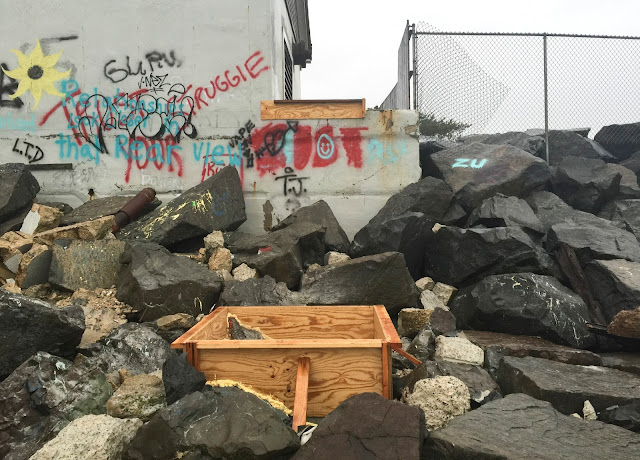 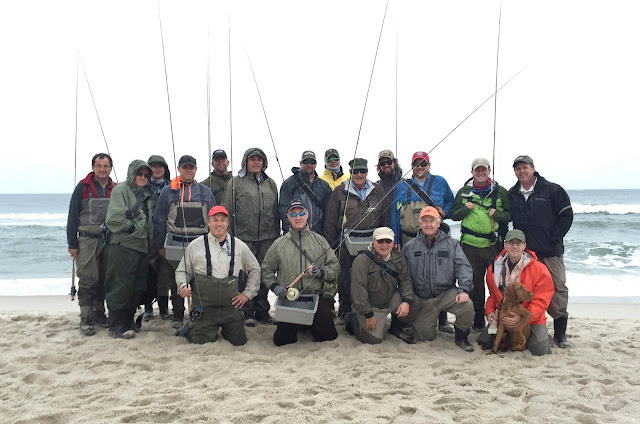 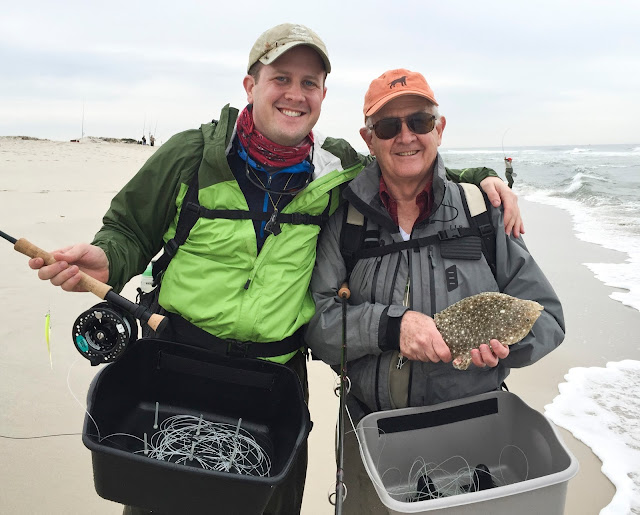 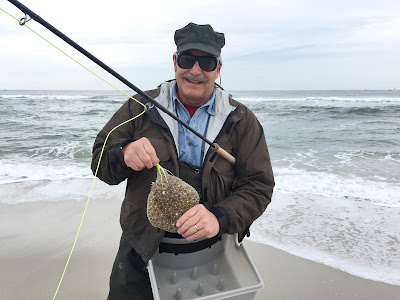 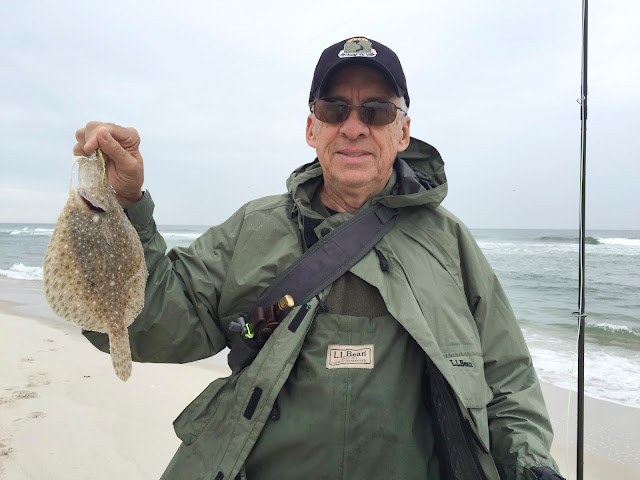 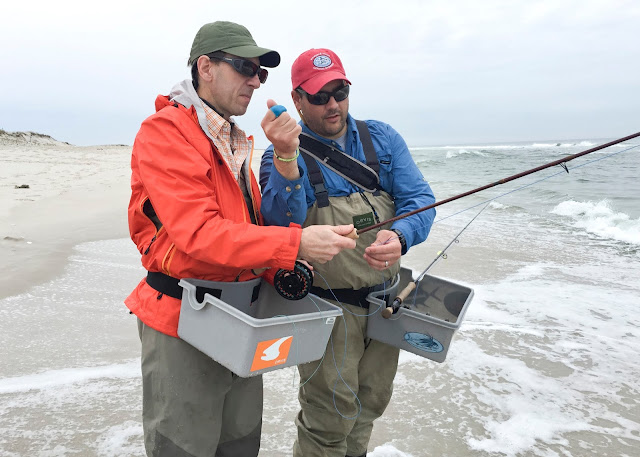 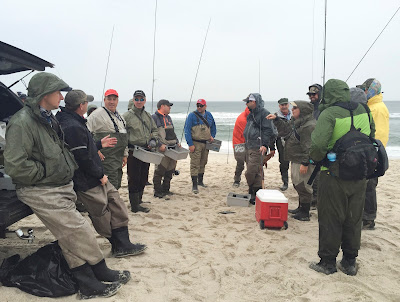 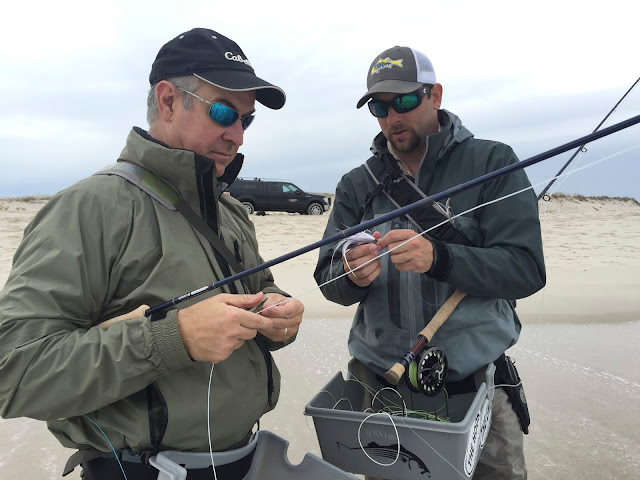 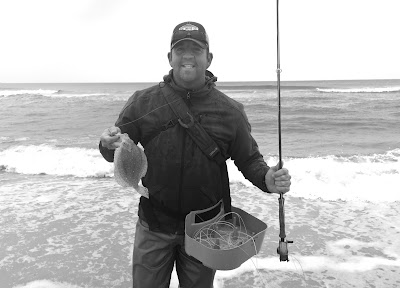 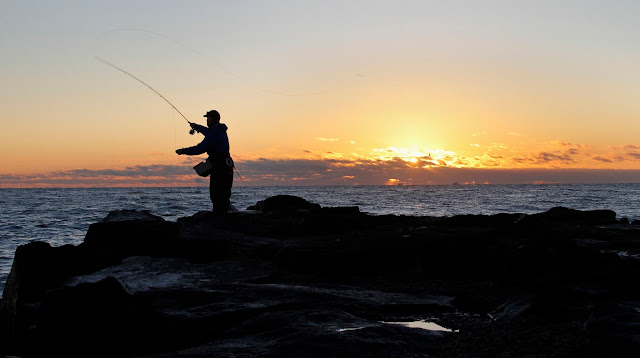 Well even though I haven't been posting I have ben down to the water a lot and have fished since the last post. Not much of excuse other than life, well my new life, is getting in the way. I now know what its like to be a guide and a fisherman with a separate career outside of fishing. Luckily I am settling in to the nursing job at the hospital and school seems like the end is nearing.
I have been up and down the northern shore, mostly from Sandy Hook to the Shark River Inlet. Now living in Red Bank the closer shot for me is Long Branch north. My home waters of Long Branch south, especially Deal and Asbury, has been decimated by beach replenishment. In my travels I continue to hear about "that Thursday" when the first push of fish came in and hit the beaches. There was no Blitz-O-Ween like last year, if fact it has been slow on the beaches while the boats have been doing well. The fish are starting to arrive but in my outings bait hasn't been around, other than days when big bunker is aplenty off shore.

Below are some pics of "new" fishy water that I found both pre and post blow that happened a few weeks back. Although I didn't catch it was nice feeling like I had a shot, kind of like before the Army Corp blew it up. 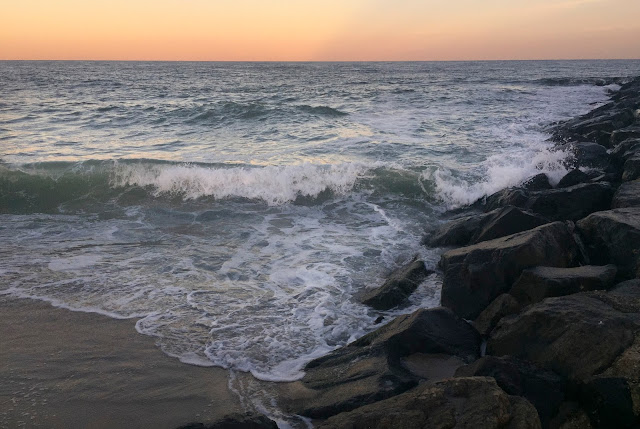 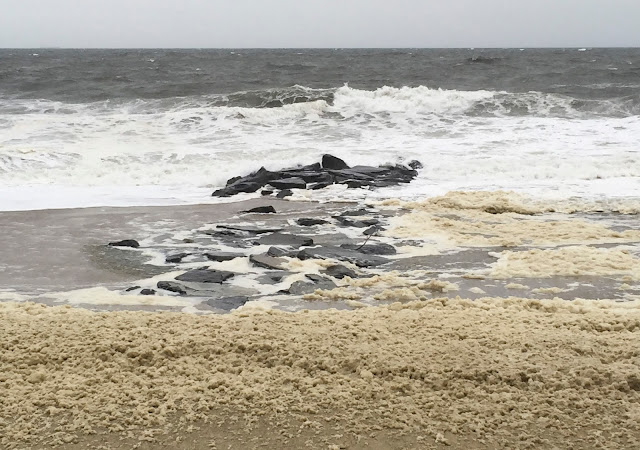 I did find one spot that had very sexy structure which produced great conditions. As good as it looks though, it is dangerous and I fear that adventurous anglers could get into a jam trying to fish on or over the sand bar. It usually happens later in the season when the sand eels came in. Please fish safely and not alone. 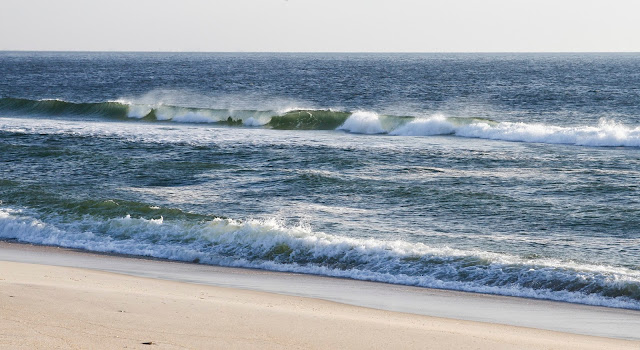 I did get a text from Bill Hoblitzel one of the better known Captains and fly fishers on the Jersey Shore who let me know that he is picking fish when he gets out. He fishes south of me, but can find fish wherever he goes.

I got to catch up with my dear friend Al. We sat along the boards in Allenhurst catching up on life and fishing, or lack thereof. I'm busier than before, and, well, Al's a touch older, approaching 91, so he doesn't get out like he used to. In a way, I guess, the destruction of his home waters may serve him well as the lack of good beaches, and of fish, have coincided with his ability to fish less. 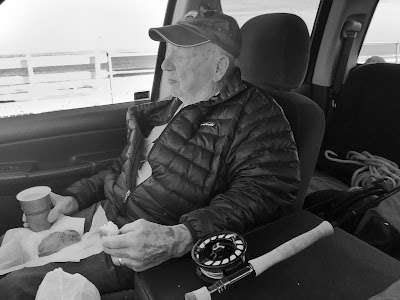 This morning I fished, well no spot burn, Long Branch. Out before first light a bit earlier due to putting the clocks back last week Beautiful morning and I popped my way up and down the beach without a bite. As the sun came up I looked from Monmouth Beach down to just about Deal and found one angler, no birds, and no sign of bait or bass.
This Saturday I'm participating in the Orvis 301 class at IBSP. We have about 25 anglers coming from NY, NJ and PA and it should be a nice day with good conditions and a slightly better bite down there than up here. Last year we had great time, lots of learning, lots of casting, but not a nibble with 20 plus lines in the water. That's why they call it fishing and not catching, I suppose. 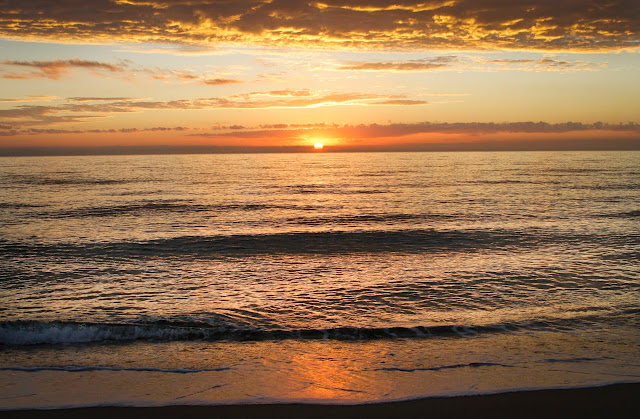