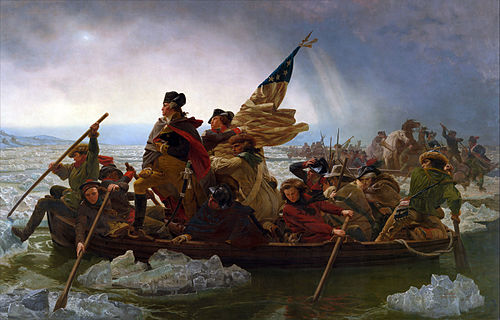 So living about a mile from the place where George Washington crossed the Delaware enroute to The Battle of Trenton....we are all about George out here. We're enjoying the day off from school and work and the near 50 degree day. Looking forward to getting out there and the requests for my fishing schedules are starting to come in.

I'll be doing walk and wade and boat trips starting in April so call 732 261 7291 to book. The particulars on the trips and pricing are on my website HERE
Posted by The Average Angler at 12:00 PM

No surprise to most of us who fish without our heads in the sand that the Striped Bass Board of the ASMFC has determined according to the 2018 preliminary benchmark stock assessment that the striped bass stock is "overfished" and that "overfishing" is occurring. We have all seen the decline of the striped bass numbers over the years, with a marked decrease in the last five.

While the naysayers point to the the Cape Cod Canal fishery and a weeks reports from the Captree fleet as proof "there's still a ton of fish around" they are stupid thinking this fishery is sustainable. Every dead fish is one less.....hundreds are hundreds less......thousands are thousands less.

New York is taking some steps to help out, as I guess is Maryland. NY is trying to eliminate purse seine netting and banning reduction boats of bunker and Maryland is allowing 20 inch fish to be taken if charter boats continue with the mandatory circle hook use.

Recreational guys are killing striped bass more than commercials, although the finger pointing and denials from both sides laughably continue. Poaching as always is on the rise...with mostly slap-on-the-wrist fines given for abusers. Now, every now and then an angler gets made an example and gets a few thousand dollar fine......but never gets cross prosecuted, like not for immigration status, but  will for child support payments or other warrants. Enforcement is a joke, the system, not the officers who do their best everyday.

We continue to make strides but I still feel to little too late. The annual striper slaughter tournament put on by On The Water has gone the extra mile from to catch and release to negating the need for weigh ins......I like that move.

It's early February, winter has been mild, hopefully remains the same, and spring rolls around sooner than later. The only problem looking forward as the bays and rivers are closed to angling is that soon the bunker chunk cold wether early season charter captains will be anchored up in the bays, specifically Raritan, to feast on the big females and smaller males, that are trying to make their way into spawning rivers for an easy take fishery. I say catch and release until June 1st except out front......that will save a lot of striped bass, or at lest give them one more shot at reproducing before making it to the dinner table.

Thanks to Capt. John McMurray HERE and Capt Paul Eidman HERE for staying involved in the fight and keeping us all in the lop.
Posted by The Average Angler at 5:56 AM