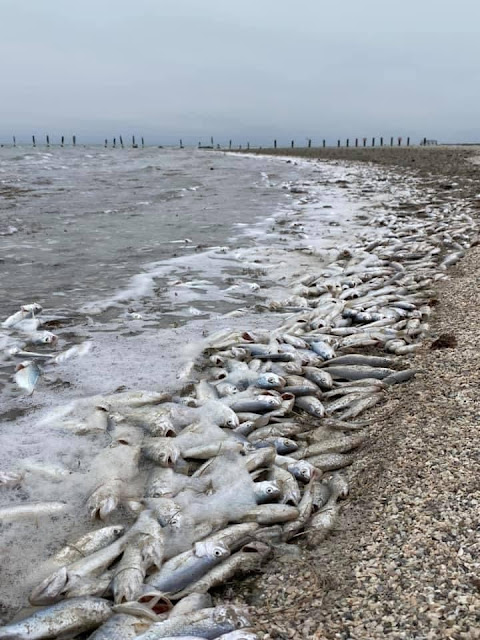 Theresa and I have been getting daily updates when we check in with our daughter and her boyfriend who. moved to Plano last year. Its cold, there's no heat, pipes are bursting everywhere, but they are safe. While of course our herts got out to anyone suffering during this, we can't forget how this quick wether event can impact the wildlife. Here's some pics from Texas showing fish that dint make it. 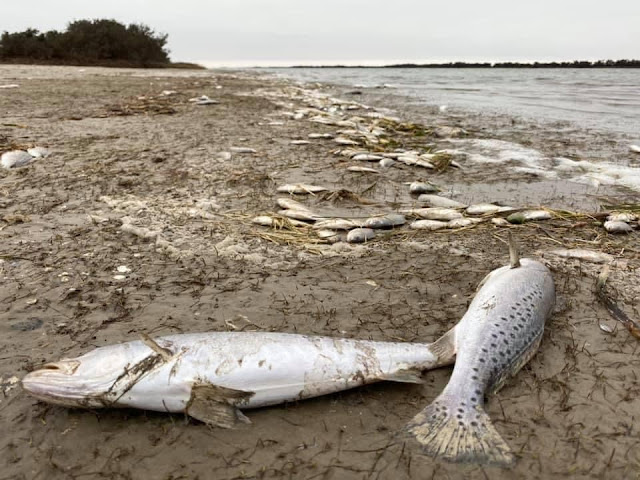 In Texas they have rescued over 3,000 turtles and are keeping them in doors until it safe to return them to the water. Just imagine how much wildlife will not survive this, wild and domestic. I hear the chickens are taking a beating down there due to the cold and lack of food. This will al have a huge effect on prices in the near future, and the gas, that'll be over $3.00 a gallon very soon.
Posted by The Average Angler at 8:03 AM

I found this pretty fascinating. Want to know why you might might not be catching fish on the beach these days? Want to know why the boats travel way outside the 3 mile line only to find acres of bass rolling on top? Well, here might be why. 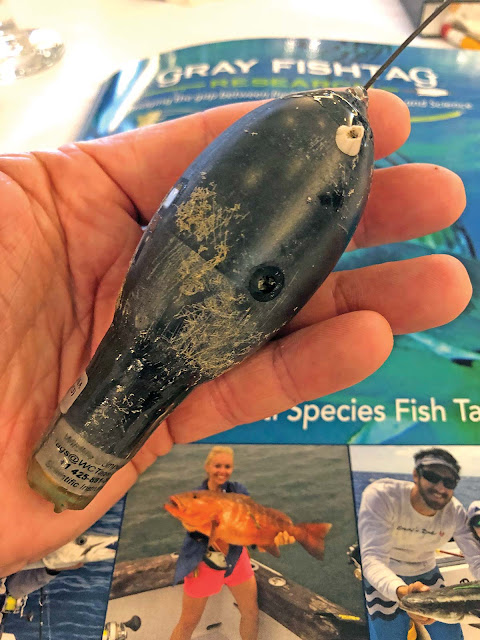 This a link to an article from Jim Hutchinson from The Fisherman Magazine. He tells how three fish were caught, two off Sandy Hook and one off the East end of Long Island, and implanted with a tracking device and followed from May to August last year. Needless to say not one of these fish saw a surfer or sunbather from the shallow waters off the beach.
The link is HERE
Posted by The Average Angler at 7:35 AM 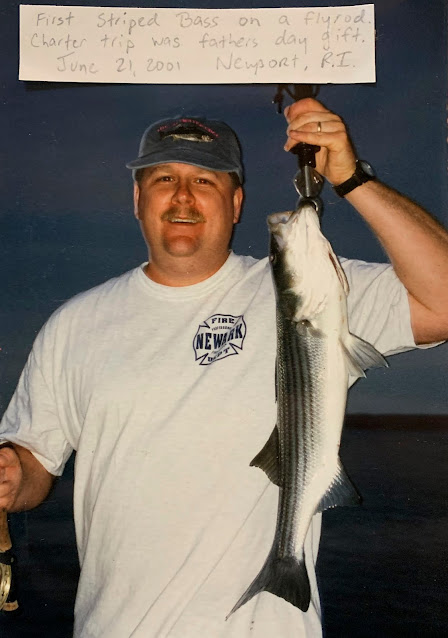 There a lot of firsts we remember in our lives. First kiss, first time getting laid, first pet, first job, first marriage, first child......and of course your first striped bass. It was 2001 for me, a few months before the World Trade was attacked. My first wife and I had returned for another trip to Newport for a stay at the Marshall Slocum Guest House. While there I was treated to a Father'd Day striped bass charter trip. It was through a place called The Saltwater Edge. The Captain was Corey Pietraszek.
I grew up in Millstone learning to fish the lakes and irrigation ponds in what was the country back then. It was all about bass and pickerel back then. My parents divorced and my father moved to Spring Lake Heights, close to the ocean, and my mom moved to Red Bank, closer to the ocean, but I never got the saltwater bug. In fact I really hated the beach.
After The River Runs Through It I started fly fishing and cut my teeth on rivers like the Manasquan, which is made for fly fishing....not really, and then the northern Jersey Rivers like the Rockway, Paulkinskill, and Flat Brook. Even after I started helping out at The Fly Hatch in between my shifts at the firehouse in Newark it was all about the Upper Delaware and trout, a place I had started to go and love since the mid 1990's.
When I worked at The Fly Hatch it was more saltwater then fresh. Regulars included Fahar, Popovics, Hoblitzell, Eidman, Dennis, Shapiro and all the rest of the Jersey fly anglers. But still I resisted until Dave sold me, with my employee discount, my first saltwater set up.
And then in 2001 Captain Corey Pietraszek had me out off of Newport picking along the rocks for schoolie striped bass, and that was my first striped bass. Through the next years I still focused most of my attention to the Upper Delaware. Countless tripes to The West Branch Angler where I aways wade fished never hired a guide for a drift boat trip. It wasn't until 2009, and moving to Ocean Township, that I developed the addiction for striped bass on the fly rod. I was literally 5 minutes from the ocean depending on which I route I took and if I didn't get stopped by the Loch Harbor police officer shooting radar set up on Grassmere Avenue. 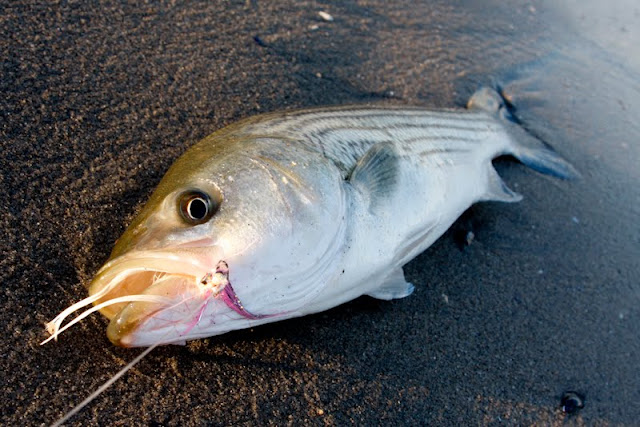 I really got into striper fishing during the fall of 2009 and didn't catch my second striped bass until June 2010, HERE. When I read that original post I had to laugh how a 22 inch striper "had me into my backing".....loser. And the above is a picture of striped bass number two, 2001 for my first and 2010 for my second. When I compare my "career" in fly fishing for striped bass I realize I am a but a newcomer to my older bestest buds. Some started in the 70's and even the 60's, I was born in 1968, and some even earlier, like in the 1950's. 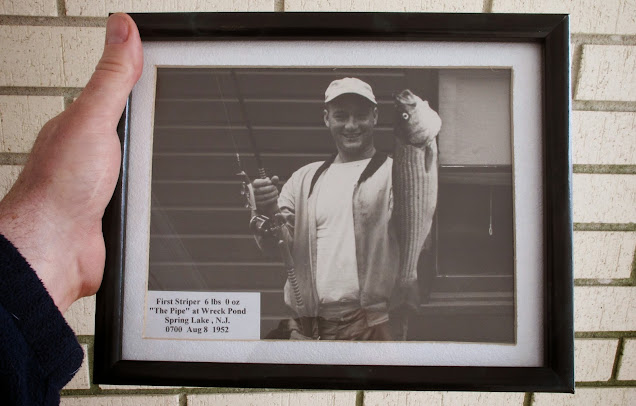 Yep, August 8 1952, that was the day Al got his first striped bass after, if I recall, a year or so of taking the long drive from around the New Brunswick area to fish. He did at night either before or after work. Imagine saying, so Al stopped fishing say five years ago, that you have fished fro striped bass for 75 years. Howe many beautiful mornings, how many storms, and how many bass? I miss my friend Al, dearly, and I will make sure to email him this post. The last time we were together was September 2019 right before he moved down south to North Carolina with his wife Evelyn. I was afraid that would be the last time we got to talk in person although we have stayed in some kinda touch by phone and email since. 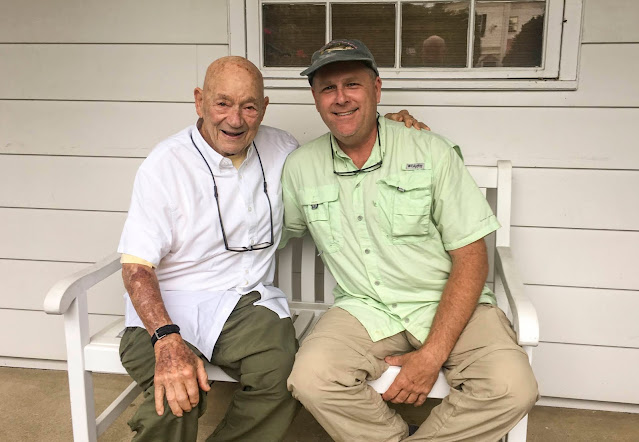 Posted by The Average Angler at 7:42 AM 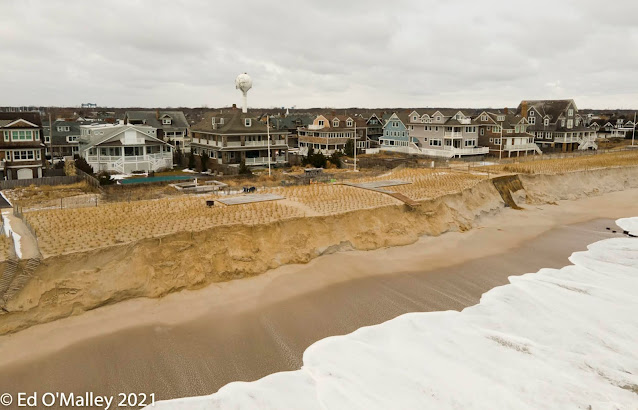 This fall I ventured down to Seaside hitting spots along way, Point Pleasant, Bay Head, Mantoloking, and points south. These beaches have gone through rounds of beach replenishment in recent years. And like we've said before, this is insanity. Throwing billions of dollars into a failed attempt to curb Mother Nature and the normal ebb and flow of the natural coastline, why, to protect those that feel encroaching and setting up shop right on the ocean front is s good idea. They have no worries, as long as vote hungry politicians like Frank Pallone are willing to make them happy and work with the DEP and ACE to pump useless large grain sand up onto the beach. Its makes for a nice, well really not nice, beach for a summer or two, and then its gone.

That stretch of beach replenishment probably cost somewhere around 5-10 million dollars. It looks they lost probably 60-80 of beach, from grade in the ocean to over 8 foot at the dunes. Well done, and this wasn't even one of those big fall storms.

People are stupid. You can't fuck with Mother Nature. Someone please stop this insanity. 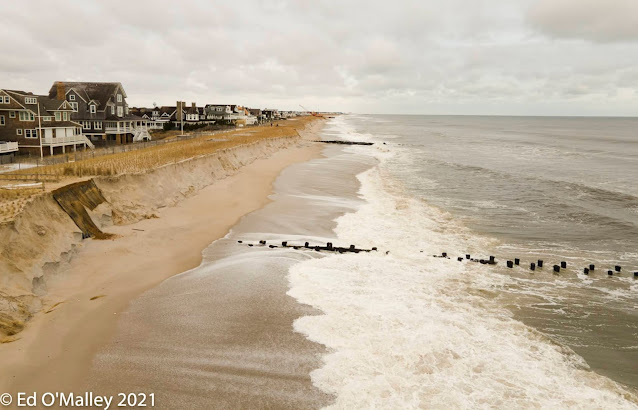 Photos came from Surfcaster's Facebook page, photo credit to Suzie and Ed, Realtors, HERE
Posted by The Average Angler at 8:36 AM 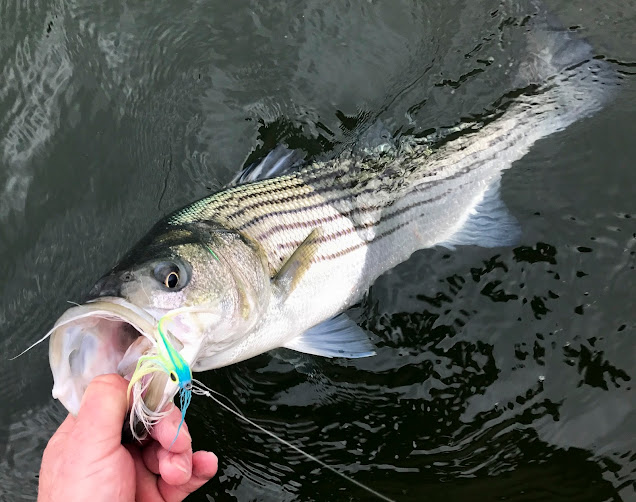