So yesterday I just brought up what appeared to be the hot topic for the day in the fly fishing community- sexism in fly fishing. Now, most likely most of you weren't aware because you don't follow trends or news in what is a hobby. Kind of like those that watch professional sports, such as the NBA and NFL. To you, or many, it is just a hobby, or a passion, that exists in a world outside of social issues or politics. You bounce or throw the ball to score to win. You tie on a fly and cast to catch a fish. For you, thats it, period.
For others it is more. Their passion, like many other things in their lives, have to be all encompassing, as related, all equal. The meaning cannot just be left alone, it has to mean and do more for themselves, and of course against or marginalizing another.
So what kicked off a day yesterday, or really the week, well its kinda of been the last month or so, well maybe the last few years, are statements made by a few telling others "how we" have been doing it wrong, hurting others and "need to do better".
Jay Nichols, and author and employee at The Caddis Fly Shop got the ball rolling with his article that I shared yesterday. That got some people going. The gist was that some names of some flies are offensive to some, and should be for all people. He called "them" out. Funny that as of yesterday on his own fly shops website for $5.95 I could buy a fly called PJ's Lynch Mob. "Lynch Mob", do I need to define what that has and could mean or refer to? It was okay to purchase that fly two days ago, a month ago, all during last summer when the country continued to be unhinged and turned upside down. Not it is not.

Now this morning to tempt  those big trout or bass you can buy the same fly, now more affectionately known as just PJ's Mob. For those in the know, we will always know what the original name of this fly was, at one time, before it got cancelled.
Maybe we should "check ourselves before we wreck ourselves before called calling out "them, us or we" and pointing fingers. Turn those fingers to yourself, when asking what others are doing and how they are hurting another person. But that is to easy, especially when we can hide behind a keyboard. Name call, character assigate, separate and divide. Like I said yesterday, "Its over Johnny".
So that brings me to today, and just a quick glance at The Orvis Fly Fishing Facebook page. Normally every day each post gets a few likes dn shares, but I was drawn to a post that had over 200 likes and 500 comments. New fly? New video? Surprise leak of some new gear or rod in the making? Nope. It is more of the same. So I took a peek, mores interested in the comments than the original article that appeared this month in The Fly Fisherman Magazine. You can see that article HERE. This article is titled Promoting Diversity on Our Waters.
Now let me say this, increasing participation in the sport great, by whom, everyone. Kids, adults, people, period. 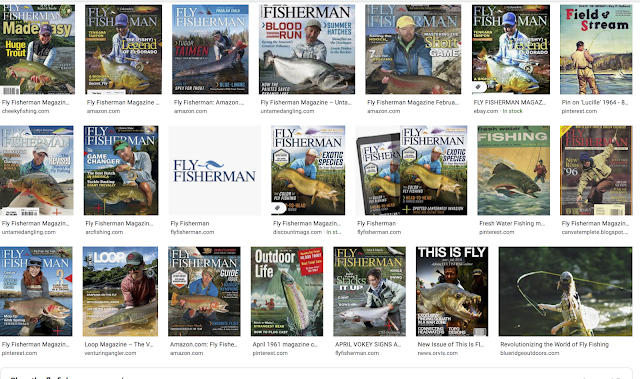 So The Fly Fisherman magazine used their magazine as a platform to publish an article by Herb Miller on February 22, 2021. They publish many articles in their hardcopy magazine as well as their online presence. In the article Simon Perkins, the CEO of Orvis is interviewed, you can see his comments and vision in the link above.
For shits and giggles I did a quick search of The Fly Fishing Magazine covers to see if they have been, or learned early on, how they may contribute to the oppression of some and the inclusion of others. You know being diverse. That would mean cover shots of people, forget just back and white, ho about a kid? Howe about someone with a handicap? But what I found was a series of all white and mostly males doing their best hero shot imitation with large fish from far away lands. Mmmm....who can afford that.
Now back to Orvis, lets take a peak at where they think we, as a people, of varying diversity and socioeconomic means could, or should fish. A quick look gives you several opportunities to experience fly fishing and land the fish of a lifetime. In this Orvis Destinations screen shot, you will see invitations to go to Canada, Belize, Bahamas, Patagonia, Kamchatcka, Europe, and Mongolia, and the invitation to "Join an Orvis Group Trip". Just because I noticed, every person in every picture is white, in color. There's not even the usual black guide from the Island destinations, even the guide from Bahamas is white...C'mon man. 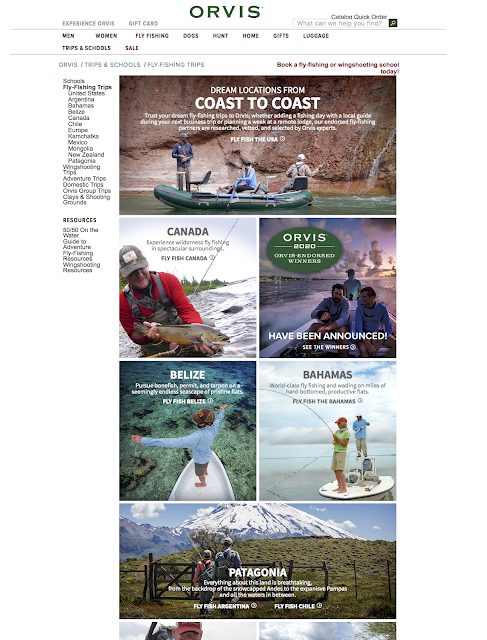 Guys and girls, this is nothing about us. These are businesses, trying to make money, that is the bottom line. Products from China, keep costs down. Political correctness keeps you on the right, or left side. Rather than stand alone and point fingers inside, they choose to point the fingers at others, or as an industry as a whole. "Me" has become 'We, us, out".
Nobody or no company is both stating that "Me" has screwed up and backed up the words with action, without it having to do somehow with making money, the bottom line. More woman in the sport, fantastic, more product availability means greater market share which means more money. More diversity, means a greater number of potential customers, which means more money.
Orvis is stating that we "need to do better" to be more diverse. Okay. Well Orvis take a look at yourself, and your ads, and your destinations, and also tell me, what low income inner city home, regardless of color, has their shit as dog sitting on one of these..... 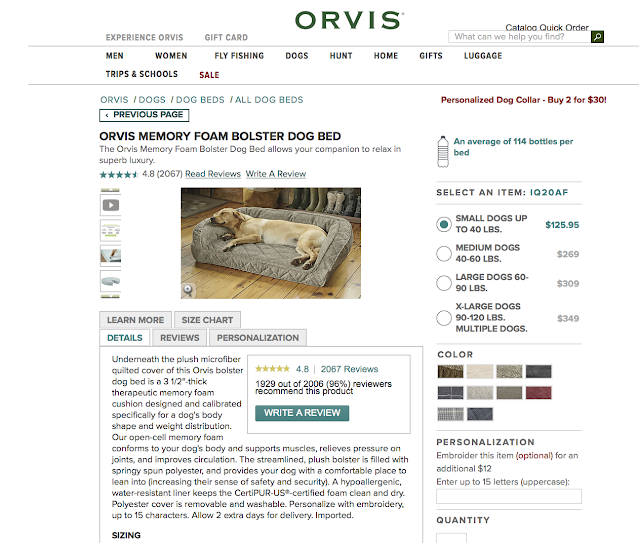 So its $125, thats the cheapest one,  for up to a 40 pound dog. But for that low income family that has their 90 pound pit or rhottie and would like to embroider 'Peaches" on it so the dog knows its their own bed, they'd be looking at, lets say, $361 plus tax, and shipping, so maybe around $400.
Is that diverse, is that targeted to the masses, the less fortunate, the people we hope to include in that "community" that has been discussed the last few days, months and years.
Sometimes we are who and what we are, its difficult to serve many masters, I'm sure that word alone offends someone, that is why the "selling" of inclusion and diversity will have an opposite effect. Not that you scared of losing the people whose backs you have built your business on, those with the money and ability to purchase your products, take your trips, use your guides, buy your books, and feel comfforbtale with, generally, like minded people regarding issues that go far beyond fly fishing alone.
So yesterday's word was hypocrisy. And todays word remains the same, hypocrisy. Tomorrow we will explore the world of wing shooting and hunting and guided trips. We will look and see if pigeon hunting in the fields of the Kill Van Kill in Staten Island are included in the destinations section of their catalogues and web pages........C'mon man wake up!

Posted by The Average Angler at 7:40 AM