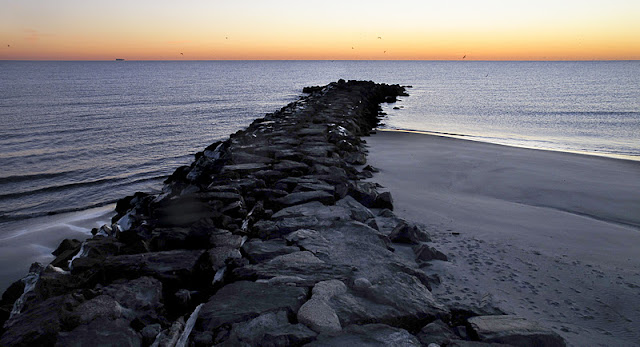 Well for me work is busy. I'm finishing up editing some assignments I recently shot and then have to start getting things ready for the accountant for both The Average Angler and Agency New Jersey. I figured I would quickly take a ride down in the 14 degree temperature today and see if anyone was fishing or how things looked. I hit Deal and took the walk to make the above picture.
In the last few weeks I have noticed, wrote and photographed a lot about the crabs that have showing up in force along our beaches. I have spoken to a lot of anglers and in the end I was comfortable in reporting that I think we are seeing an "epic" rock crab (ie: white-legger, cancer irroratus) hatch going on. It started before the full moon and peaked almost right on it, and the kept bass have been full of them. I have received several emails, Facebook posts, stand and chats, that some think these are the "other" white-legger, the Jonah crab, cancer borealis. I have a call out to some local experts so we'll see what they say.
Besides it being a nice first light picture, I was drawn more to the bottom of the frame. The tide is outgoing and the beach end of both sides of the groin are visible. As you can see, and probably know, it's common to have a built up of sand on the south side of the groin and less sand and a pocket on the north sides. That's where the fun starts. I remember a few years back when I joined the American Littoral Society because I wanted to be a part of the striped bass tagging process. I was stumped on the title of the group, thinking littoral, or literal, had something to do with language or words. Then I looked it up and it opened another whole can of worms for me.
I have kept notes and articles from local anglers such as Jim Freda and scientists and researchers such as Phil Stoffer and Paula Messina. There are simple one line answers, or complete dissertations on the subject of beach structure and tidal movements and the effects that wind, weather, and moon phases have on them. It's an interesting subject, but man is it  in depth. So....here's what I have found come to know. 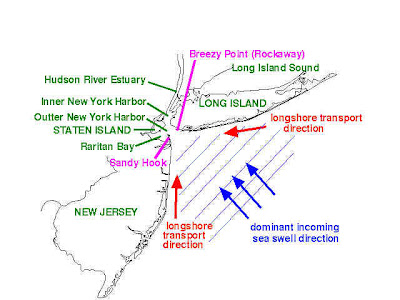 Map from CUNY New York Bight website, HERE
The New York Bight, is basically a triangle, that runs from Cape May, New Jersey to Montauk, Long Island, New York that includes the Hudson Canyon. Below is a map from NOAA showing the region, 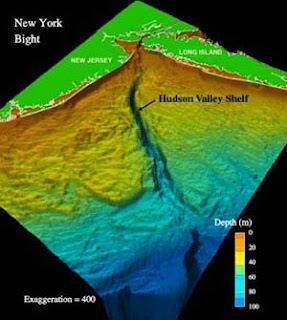 I'll concentrate on the New Jersey shoreline. A littoral, or longshore, current is generated by waves intersecting the coastline at an oblique angle. Oblique meaning not perfectly perpendicular or parallel. It is based on several factors, the greatest being the prevailing wave and wind direction. The prevailing wave direction in the New York Bight is from the southeast. Anglers who fish at incoming or high tides can see this when they cast their plug, fly or metal straight out and it is pulled northwards as they retrieve, even if the wind is from another direction. So basically the littoral or longshore current along New Jersey is from south to north, or from right to left.

As the littoral current travels from south to north sediment is carried along with it. Sediment in the ocean is sand and gravel and bones and shells. That process is called littoral or longshore drift. With the rhythmic wavelike to and fro action of the waves the sediment is deposited and retracted along the coast. Barrier islands like Long Beach Island and from Point Pleasant to Island Beach State Park see beach structure differently then those towns with jetties and groins. Although there are similarities, the difference exist because of things like beach replenishment, jetties, groin construction and groin de-construction, or notching. The sand bars, cuts and troughs that run the length of IBSP are an example
When sediment, sand, is deposited along the beaches and on the south side of groins or the south sides of south side jetties, that process is called beach drift.

If you look at the above picture you can see the difference in the south side (left) and north side of the groin, image taken seconds apart. Sand is deposited on the updrift side (south) and eroded on the downdrift (north) side. During low tide you can see a higher sand level on the foreshore on the south side of the groins, while the north side is deeper and has a more pronounced pocket.
When humans try and fool with Mother Nature we disrupt the normal to and fro motion of the waves  and sediment along the New Jersey coast. We have already done things like instal and de-install rocks groins, seawalls, and every year it seems beach replenishment is happening. In 1996 Sea Bright was replenished, and that sand was redeposited along Sandy Hook and into the Sandy Hook Channel by the normal littoral currents. In 2009 the West End of Long Branch was replenished, in two years it was gone.
Hope I didn't botch this and confuse anyone. If I did, please let me know.
Posted by The Average Angler at 10:35 AM