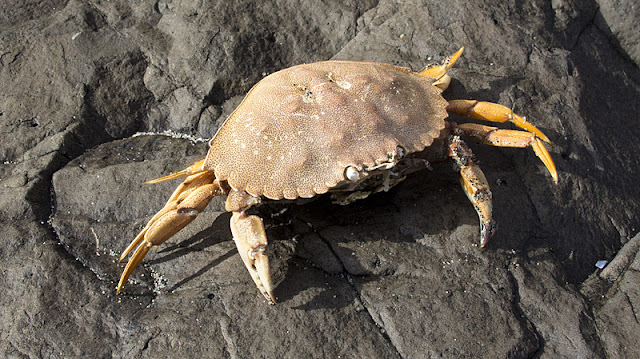 I brought my crab fly down to Deal and figured I'd get in place if things were to go off like they did yesterday, HA! Anyway I made some casts with my fly and worked it slow along the rocks. In fact too slow. With the incoming tide my Depth Charge 350 grain sinking line wrapped around a rock and there was no way of getting it out. I had to gently snap it off. And that was that.
I found one of the crabs that have been littering the beach and the rocks for the last few days and been found in the stripers bellies. After checking with a few anglers and sources it's an atlantic rock crab, cancer irroratus, or commonly known as a whitelegger.
I moved south in Deal for a bit and met up with Bob and a Conservation Officer who was out on patrol.  We saw a bunch of birds way off and as soon as they were up and diving they were scattered and gone. The water remained flat as the sun went down. I drove along the shore down to Spring Lake and gave fished Brown Ave for about 20 minutes before calling it a day.
Posted by The Average Angler at 4:46 PM