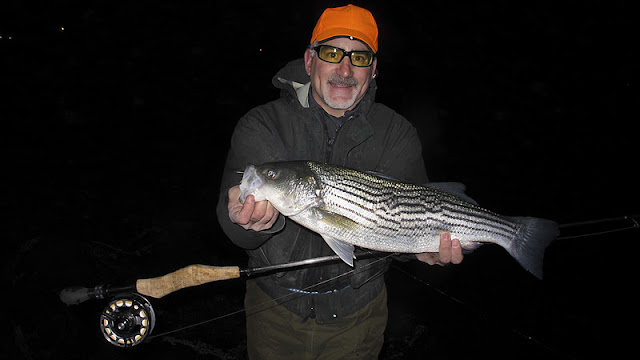 Got out around 730 and things were a little different than last night. The wind was out of the south and the water had a little more chop. Tonight I went with my Orvis Access 9ft 9wt and the new Hydros Striper Intermediate fly line. I'll be able to report better on the line after I use it in the light, but so far so good.  I fished several groins along the Avenue and found anglers catching fish mostly on the end of the rocks. With the full moon the water is high/high and low/low. I stayed in touch with fly angler Joe who was on another set of rocks and I decided to join him just as I was about done. We fished for a while and Joe caught this nice fish on a blue over white Deceiver.

Just as I was about to turn towards home I saw a camper at 8the Ave and I knew whose it was. It was Zoltars. He was the only one fishing and was walking up the beach when I pulled up. I said, "I know 200 fish, right?" He said, " No, 19, but I lost more."