After a long day at the Jeep dealer shopping with my wife for a car for her, and after dinner with the gang, I decided to give it a go. I hit the usual spots and there were tons, well not IBSP tons, but a lot of anglers out. Word must have spread that we have some, some, fish around these parts. I stopped by Asbury Park, Allenhurst and Deal and found lots and side streets heavy with vehicles. I picked a spot and went for it and after a long and treacherous walk I made it to "my" spot and found two anglers already there. It was the same thing last night, and the same guys, and they repeated again. After they had enough and as the tide went low they moved on.
I was able to get into that spot and made my way way out onto a flat rock that gave me a great platform to cast flies from. I soon had a fish on briefly and then caught a large dogfish. I was surprised to hear someone calling my name from behind me, it was Bob, a sand kicking regular, but not one for the rocks. Well he was on them, and way out on them tonight. I managed a good hookup and it was a nice fish, that I lost in the rocks as I tried to get down off my perch.

Even though I didn't bring any fish, well real fish, to hand I still had good time on a beautiful 50 degree night on January 7th. 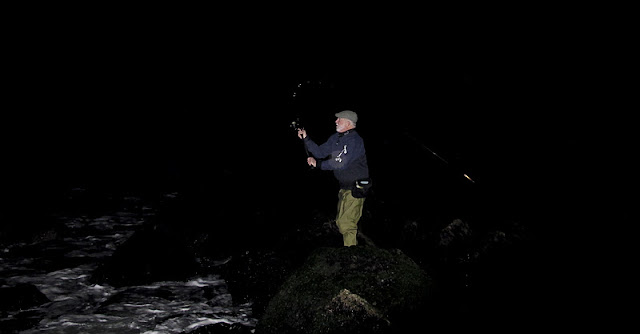 Posted by The Average Angler at 1:09 AM