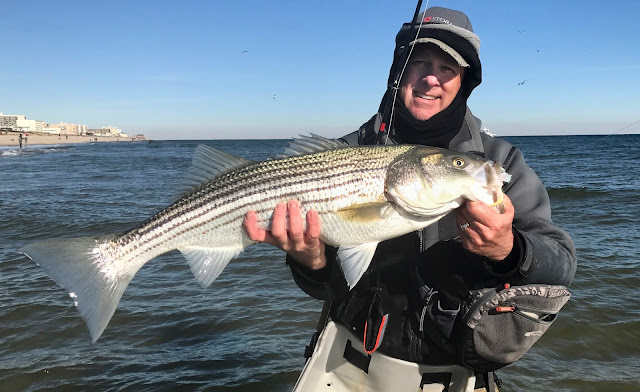 I might as well start at the beginning. Actually I should start by acknowledging and thanking my lovely wife and sometimes fly fisher Theresa. She has been supportive, maybe an enabler, throughout my fishing seasons, especially the fall, when the worst of my striped bass OCD is in full effect. Today I found it good at 10 am, and was supposed to pick up my daughter at 1 from school. But at 1115 am and things still going I decided to make the call. And she gave me the okay to stay, but added, "You owe me", and I do. 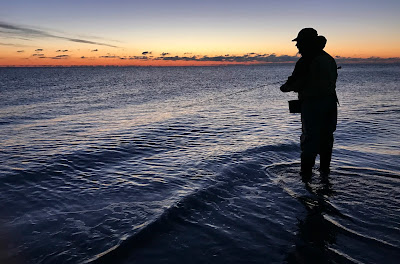 So I started out the day with Joe. Joe had tied me a few flies that he wanted me to get and he had a short window to fish so we stayed up and local. We had flirted with the idea of heading south to a two-word town, but it would have been too much driving for him. So we stayed and looked and made a few cast for the first hour after light. I decided to take a drive and he was soon on his way. I stopped and checked out a flat beach on the ebb tide and saw a few birds interested and then a few blowups. It was easy. A short walk. A few casts and I was tight with the below fish. These fall fat peanut filled fish are fighters and it was fun as she made a few good runs before coming in. I kind of left fish to find fish, again, but I knew it was good somewhere else. 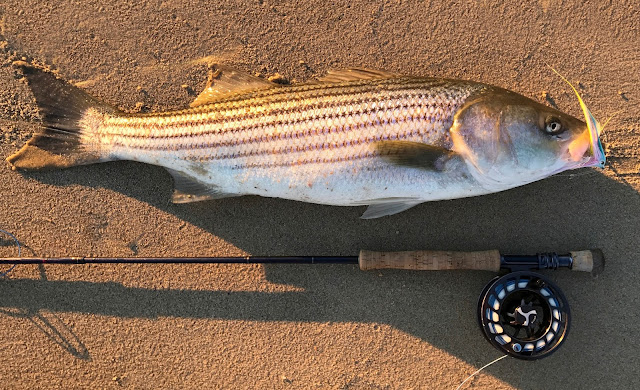 I popped my head in over six towns before settling in, and being late, at the seventh town. I saw a quick flurry and walked to the beach and as I did I saw guys running up the beach and off the boardwalk. By the time we got there it was over. I bumped into the two fly-rodding Bills who did real well there this morning, with Bill #2, the younger one, getting some real nice fish over 15 pounds. The birds were active almost onto the sand, and I left to head north hoping after coffee and a buttered roll the water would be on the flood side. 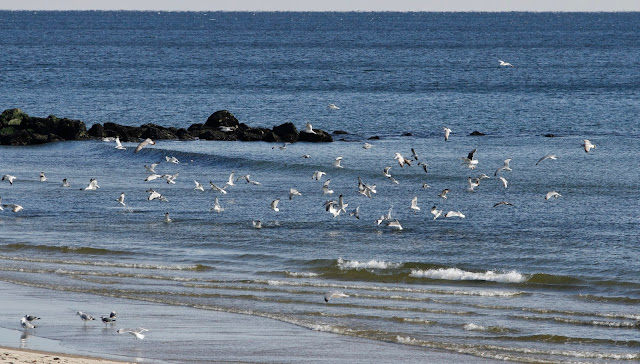 A few more stop in and looks before almost calling it a day at 930. It's the day before Thanksgiving and I need to help out and didn't want to push it with my wife. That went out the window when I found the masses of several things. Anglers, birds, bait, and bass.

I walked the beach following the crowd and the action. I put down my stripping basket and fly rod and broke out the camera. Fellow fly rodders Jack and Charlie were already in the action. The amount of bait, almost too much of it, was amazing. There were good blowups in the mix but after suiting up and making 100 casts, and not seeing any fish caught, I thought again my day was over. As I moved up the beach, and away from the bait, the fish started to blow up and guys that were spread out started to hook up. I watched as the bait moved in and down the beach, followed by hungry bass. 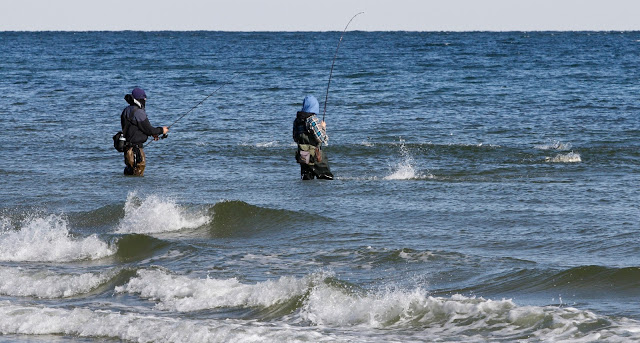 I put my camera down and got ready to give it a shot. Even though there was a lot of life there I didn't feel confident that I would hook up, this just isn't my kind of scene. Not that everyone wasn't nice and space respectful, it's just that blitz fishing in a crowd isn't for me. I waked in and surprisingly to my right was Andy, one of the old Phillips Avenue Gang. I was able to get a shot of him with a nice fish that he caught just as the going was getting good. 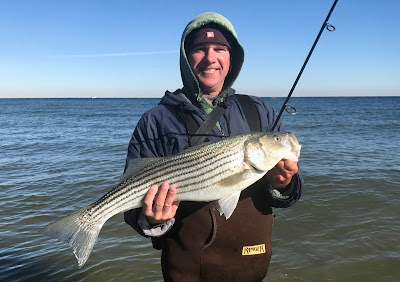 It was real good, not other way to describe it. The bass were on the bar and you could see them swimming and watch them eat your fly. Over the next three hours, thanks again to my wife, I landed 14 bass, with the biggest not pictured, as I was alone and nipple deep in the water. The top pic is one that Andy was able to reciprocate for me, and every now and then it's nice to see yourself with a fish. Below are a few images that I did get off between the flurry of activity that lasted until I left. 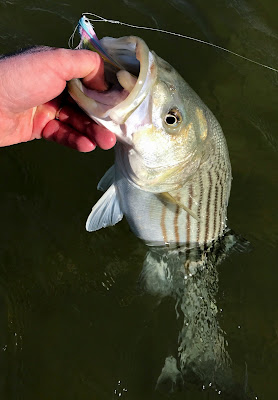 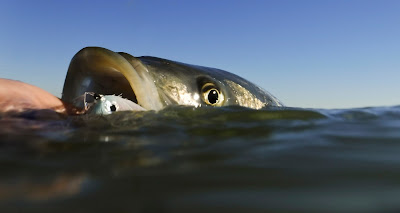 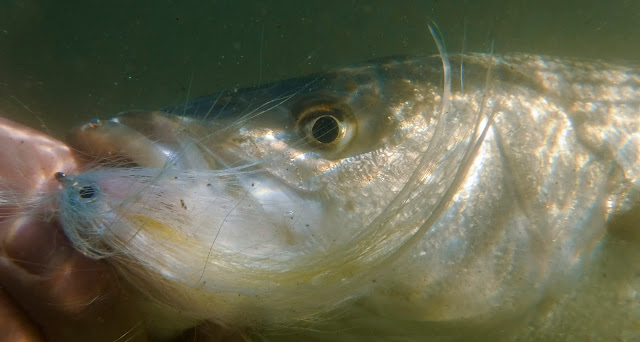 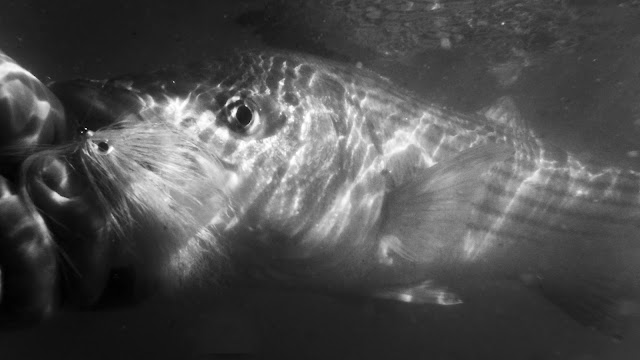 During the action and as guys walked up and down the beach I overheard one guy telling his friend, "Did you see the guy out there on crutches?". I looked up the beach and didn't see anyone fitting that description for I fished on. However, before I wrapped up I looked up and that guy caught my eye, struggling in the sand on crutches, with a keeper bass in one hand. I quickly reeled in and made my way to cut him off, of course, snapping a pic on my way there. His name is Rich and he is going for knee replacement surgery Monday but didn't want to miss the bite, and miss a few weeks
of fishing while he recuperates. 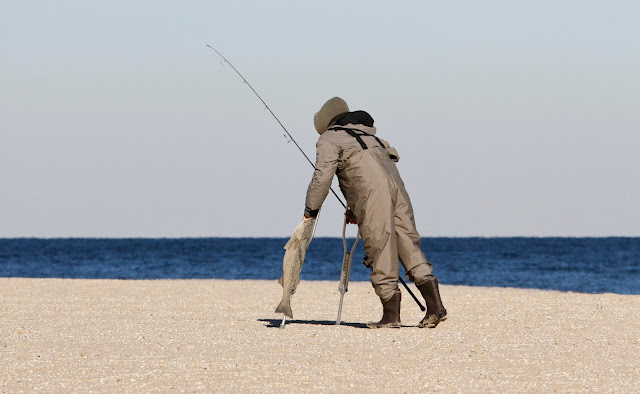 I carried his keeper back to his car and wished him well and a Happy Thanksgiving. He was a real nice guy and very appreciative and I told him to check out the blog, hopefully he remembered the address. It was a nice way to end a great late November day on the beach. 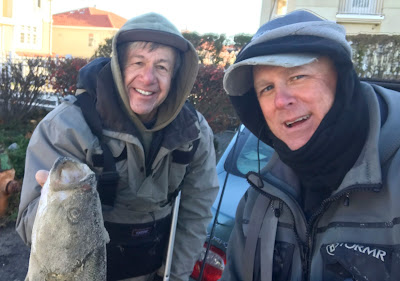 As I made my way back to the waters edge I watched the bulk of the guys tight to the pocket and doing well. There were a few guys spread out but I saw dead bass on the beach and I also realized that my feet were sloshing in my waders, and, I couldn't feet my toes. I was cold all over, but must have been numb to it since I was having so much fun.When I did get home I struggled to get off wet vacuum sealed waders and  then poured out the sea water. I need new waders. Sad thing is it's hard to find the ones I really liked, the Orvis Endura Bootfoot with a felt bottom. Orvis doesn't carry them anymore, well they do, in camaflouge. Why would a hunter need felt bottom boots? Might be time to switch up my name brands. 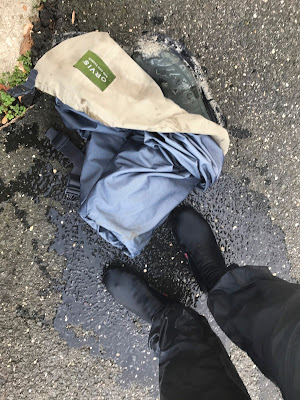