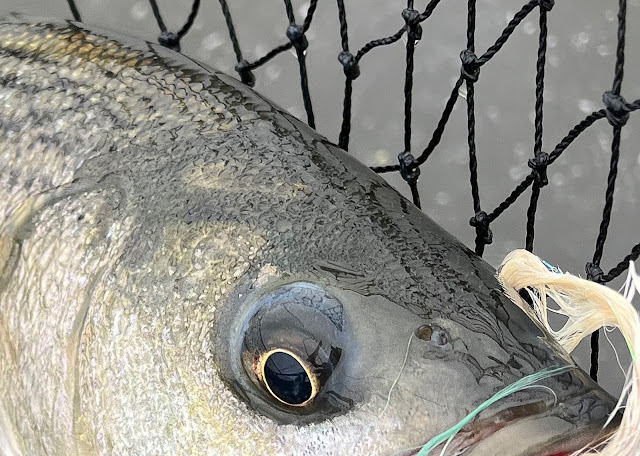 Leif gave me a shout this morning after reading the blog and we discussed our outings. Things slow on the beach for him, well, not really if you call a schoolie and a 21 inch fluke slow. But it was 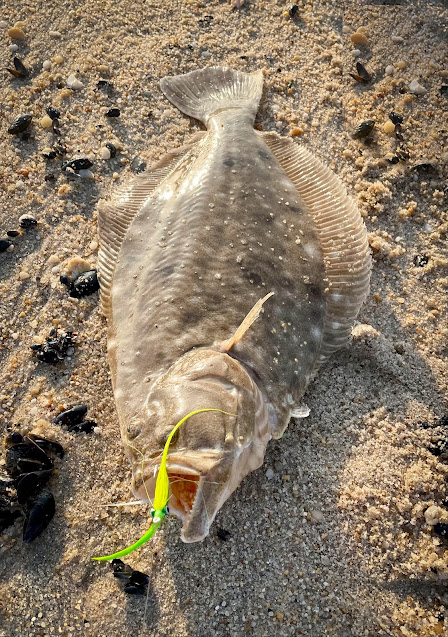 summer beach slow. No real bait, except for the mole crabs and micro baits, no real "push" of fish, just the normal grind of beach fishing at first light, something I was planning on taking the drive for tomorrow morning, but I'll pass and stay local.
But back to the bass and the coloring. We have all seen the different colors that striped bass present. River fish tend to be darker, darker on top and darker lines. Beach fish, especially in the summer seem to be lighter in color or pale. Is it a type of camouflage? Do they "change" their coloring to either increase or decrease the effects of heat and the sun? I tried a Google search but the only thing that comes up consistently is 'The best color to catch striped bass".
Leif joked that my fish looked half dead. Looked like one that had been harvested and left in the sun, the word "rigormortise" came up. Now this fish did put up a fight, and only spent the time it takes to raise the net, take a pic, remove the hook and release. No tank time. No laying the grass. I know he was half joking but it appears there is some "mottling" going on there around their heads. 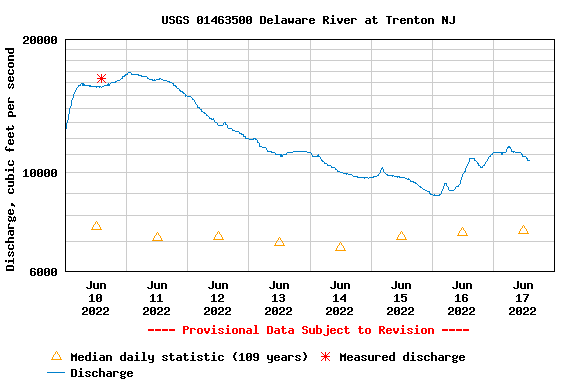 So I went and looked at the river conditions. Early this morning the river was 72 degrees and the flows up from the recent rains. The temp has increased throughout the day because of the Africa-like temperatures were are having today, currently in Trenton it's 93 degrees and the sun is doing a beat down. When we talk about responsible fishing and water temps we think about trout. Trout, 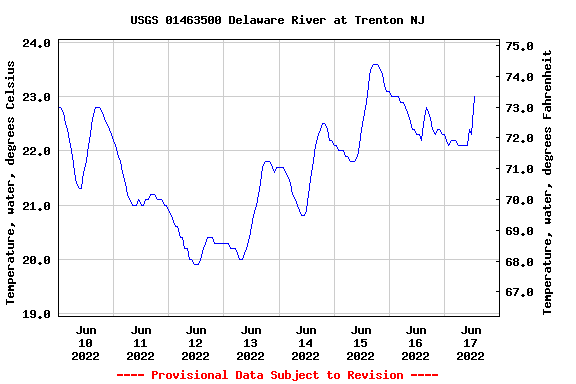 especially the wild ones, can't tolerate warm water, and definitely not tolerate the stress of getting hooked below a drift boat, hauled in, photographed and released. Stripers are different. They are more tolerate and have a wider range of water temps they can survive and thrive in. Lets for argument sake say it's between 50-70 degrees. These fish can leave if they are heading down and out into the ocean, which, Leif told me, is around 68 on the beach now. Those trout can't go any further north on the Delaware than the Cannonsville and Peapacton Reservoirs. Currently in Stilesville on the West Branch of the Delaware it is 49 degrees. While on the Mainstem at Lordville it is 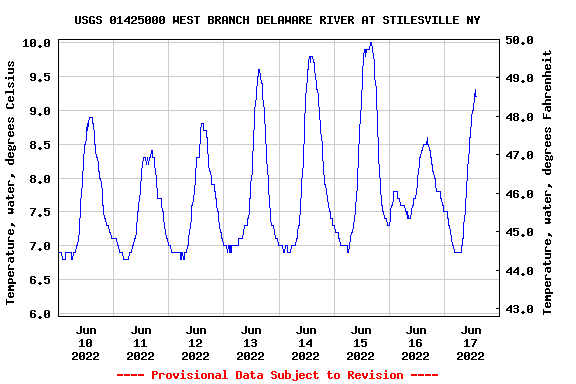 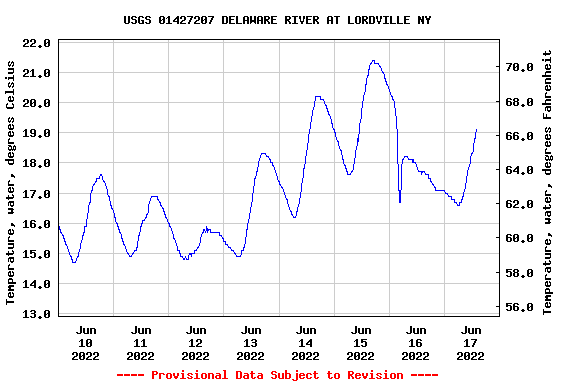 66 degrees, past the upper limit of responsible trout fishing. But back to the stripers, well, wait. I saw this post yesterday of a Cross Current Guide Service client who caught a surprise in the West Branch. I'll take that fish on a fly rod any day. Okay so back downriver a bit. So here we are mid 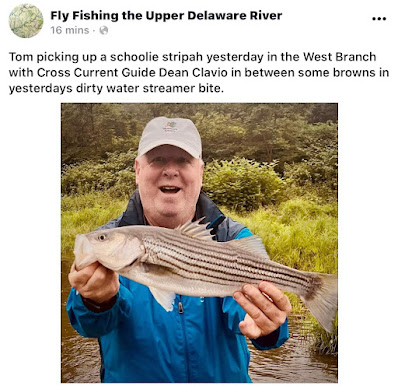 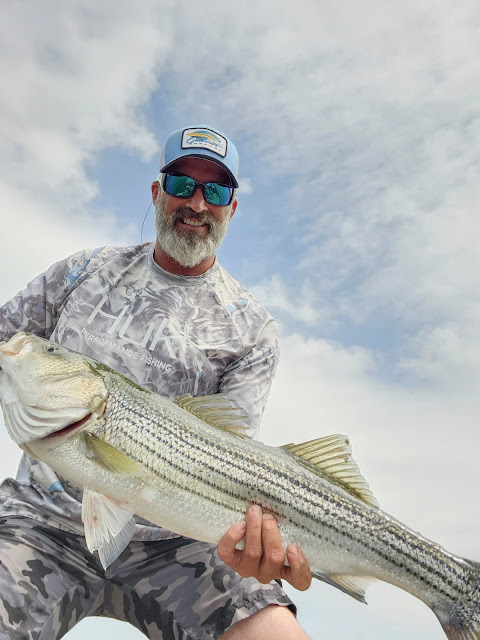 demonstrates how they can tolerate a wide range of temperatures. If they wanted to, they can leave, or a few miles below Trenton there are holes that are 50 feet deep. So are there still good fish around or am I just pounding on the resident schoolies? Well last evening my buddy was out in his boat upriver and landed nine bass to 33 inches. I would assume these are northern fish that just want to get to the beach ASAP. They can't wait to get some of those mole crabs in their bellies. 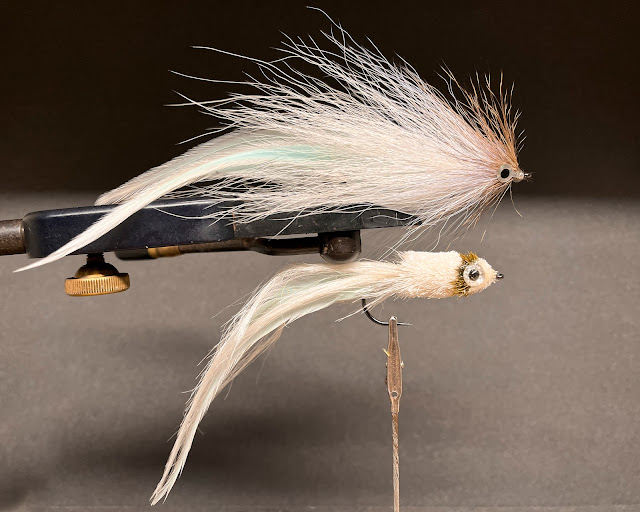 I think tonight I'll sit it out and give the fish a break from the high temps. Theresa has been out since 230 am delivering two babies at her patients home with the midwives. That'll leave me with nothing to do. Now what I might do is cut the hook off a few shitty flies and just go and cast and watch the swings and misses. Now that's something I could do all day no matter how hot it is out.

Posted by The Average Angler at 3:37 PM