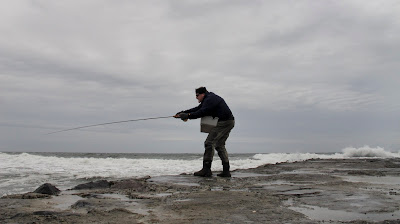 Another day where I fought off the urge to get up for before sunrise to fish. I'm just not feeling they are here, or it's necessarily an early morning bite like we had. So after doing a few office things I took  ride down to Monmouth Beach to see how thing were, and if maybe fish were on all that bait that was here yesterday. Wind was up, from the SE, no birds to see. I drove down to Seaside Park and headed to 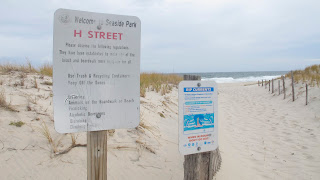 H Street because there were  a few cars parked there. When I got onto the beach around 11am I could see that someone was going to catch fish down here today. The wind was kicking with strong gusts and big waves, and the water was a nice aqua-green color. I met up with a guy I met up in Asbury Park while he was fishing last week, he was fishing with his buddy and between them they caught 17 fish, two of which were keepers. They had been fishing most of the night into the day. I joined them for a bit and then started to fish a bowl that looked productive. They had fished it during low tide and did well there. It was a tough day with a fly rod. Guys tossing bait were using 5 oz to keep bottom, or close to bottom, and guys throwing metal had their heavy stuff on. Soon a guy using cut bunker above us hooked a fish and worked his way down near us. He fought hard and was tired by the time the fish was in the wash. A fellow angler helped him out, and he was rewarded later with a nice short he caught on an Ava. The fish was over 20 pounds maybe 25. I stayed a lit longer and then headed north. 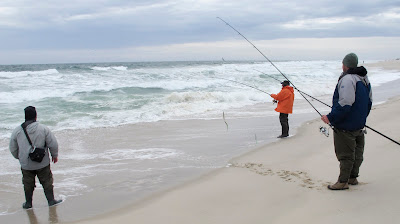 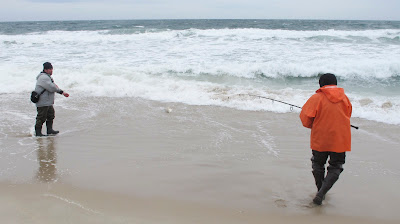 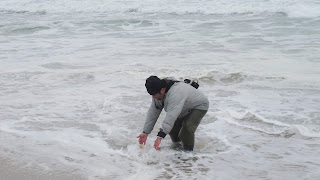 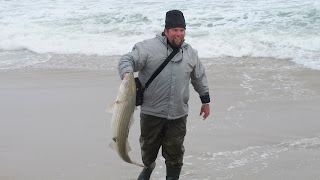 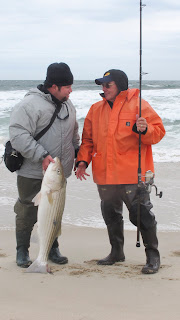 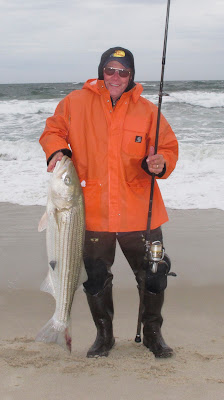 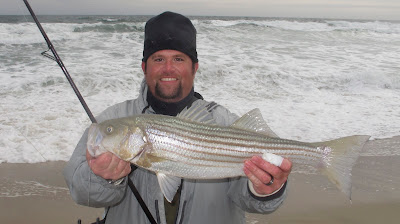 It was nice to see a fish, and a guy actually catch a fish because, for me and what I've seen, it's been dead. It has been a while since I had a fish on, hopefully this snotty weather will change that. I pulled into 8th Ave and there wasn't a fisherman's car in the parking lot. It was darker out then down south, but the wind wasn't as strong or as gusting as it was, at least when I got there. I just felt I would get one. Outgoing tide. Waves. Overcast. Nothing. Bounced the weighted clouser off the back of my head a few times, once taking my hat and putting it in the ocean. About 10 minutes later I saw it and made about 20 casts, and got it. That was a good catch, it's my favorite, The Average Angler, hat. So I chucked and ducked for about 2 hours, for a bit walking into the wash and trying the beach. I was surprised none of the usuals weren't there, maybe they're getting close to being done.
Posted by The Average Angler at 5:25 PM