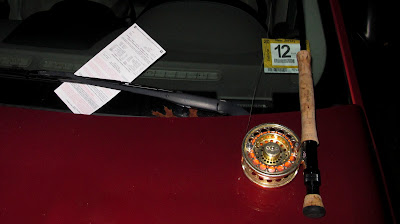 There are plenty of real things to complain about in life, getting a ticket while you fish sucks. I got to Phillips around 9 pm to fish the outgoing tide. Here's the current moon phase, a waning gibbous.

So anyway went out on the groin, nothing, fished north of it, nothing, worked my way to Brighton, nothing. Decided to call it quits around 1030. As I walked into the lot two other cars were in the street and a guy was pulling up. We talked about the fishing and then he warned me that the Deal Police give tickets to "non fisherman" looking vehicles after nine. I looked over to my wifes Saturn and it had a ticket under the windshield wiper. I was furious. Not that the cop wasn't doing his job, but that you can't park in the lot on a cold-November-Thanksgiving-weekend-shouldn't-be fishing-anyway kind of night. I went and looked for the cop to see what he could do. I finally found him in Interlaken. Nice enough kid, but once it's written, "There's nothing I can do."
Posted by The Average Angler at 11:49 PM