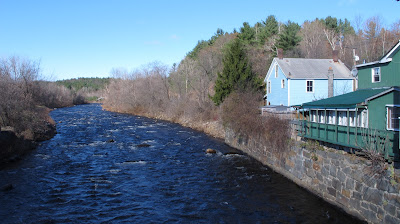 The Average Angler Lodge (green) & future fly shop (blue)
I left just before midnight on Thursday and pulled into my fishing lodge around 530 am. It was a long drive. I was pleasantly greeted with a new apron (driveway) in front of my house, courtesy of the NY DOT and after several emails and meetings I had with the State and contractors working on the road improvements in the town of Ausable Forks, where my lodge and future fly shop are. I hit the couch for a few hours and got up and took the 30 minute trip north to Plattsburgh to fish for landlocked salmon in the Saranac River. I stopped and got my new fishing license and some flies and dropped in behind CUNY Plattsburgh. Like we had in New Jersey over the last few days that got a lot of rain and the river was up and slightly stained. I settled into a stretch that I had fished last time I was up and soon had salmon jumping out of the water working there way up river along a wide rock bar. The fish, some of them large, would porpoise out of the water completely or would just raise their heads and half of their bodies. I brought both my 9ft 5wt, which was way too light and my 12-1/2 9wt, which worked better. 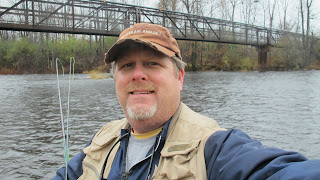 During this fall run, anglers can only use non-weighted flies, with no added weight, and no weighted lines. It made getting the flies down to them tough. I was swinging egg sucking leeches, sucker spawn, wooly buggers, and some old salmon flies I had bought while on the Margaree River during my first honeymoon in 1993.
Sometimes the salmon would breech right below me and stay there for a while and I would strip enough line out to have that fly swinging in their face, with only one strong bump all day. I fished in the cold, light rain for about 5 hours, and only had one other fly fisherman join me on the river for a short bit. It was a fun day and after going home I showered up and met fellow guide Rich Garfield from, www.flyfishtheadirondacks.com , at Steinhoffs for dinner. Rich is an incredible fly fishing guide who targets fish in the northern Adirondacks. If you ever looking for a guide there, look him and see if he can fit you in. He told me that the landlocks are tough to catch this time of the run, as they are so keyed on reproducing that they don't hit much, especially in the bigger water that the river had. Later, after they spawn they start to eat again and make their way down to Lake Champlain.
On Saturday I had plenty of work to do around the lodge to get it ready for winter. I hadn't been up in a while and the grass had grown super long, and it was wet, so it sucked cutting and picking it up. After getting all done I headed up to fish the West Branch of the Ausable. I fished for about 2 hours with not a budge. The water was 38 degrees with some snow mixed in. I was using wooly buggers, streamers, 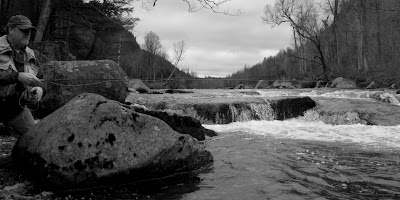 stonefly nymphs, low and slow- nothing. Rich had fished the WB the day before and caught and released 8, and missed a few more. It was a good quick trip and before I snuck home I stopped by Asbury Park to see if anyone was out or if the fish were around. A few guys out on the jetty but nothing to look at. I might go out later, high tide at 8 pm, maybe I'll go at 9, if the Queen lets me.
Posted by The Average Angler at 7:23 PM