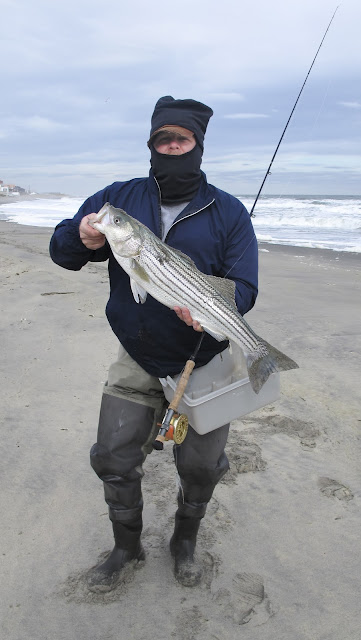 Yep, finally it was my turn. Another morning of the the alarm waking my wife upat 5 am. Got down to Deal and I could hear the waves crashing from the parking lot, great. Hard NE-N wind. Two cars in the lot before me. I got down and fished the beside the jetty, and just didn't feel it. Big waves, quick sets- just super tough with the fly rod from the beach. Then the guys came. One fly rodder on the tip of Phillips jetty got one. I watched a guy risk life and limb go out to the next southerly jetty and catch two, but had to run back to shore because the waves were getting bigger and crashing on him above the ankles. As the light came up more guys came and filled in around me. Again, I just wasn't feeling it. I had a few fish in front of me breaking the surface but I couldn't do anything with a fly rod, and I had no spikes with me for the jetty. With that, and a 9am dentist appointment, it was time to go.
After getting my mouth violated by the hygenist and a quick bite with my friend I made my way back home via Sea Bright and Long Branch. I saw one guy hauling a keeper over the sea wall in Monmouth Beach. I stopped at Phillips, and again just couldn't feel it. I fished there for about 15 minutes, with no results. I got hooked on Asbury Park, well really Loch Arbour, this morning, and wanted to go back.
I pulled into 8th Ave and there were a few cars there. As I watched the big waves crash a guy on the jetty hooked up with a keeper. I jumped out to help him but he was good on his own. I grabbed the spey rod and gave it a shot, again, my casts went about 20 feet, and it's floating line, the set up just isn't what I feel I need. So, I switched rods, going to my friends broken loaner TFO 9ft 9wt, that is a slow rod and hard to chuck big weighted flies. But I liked what I saw and read the water and gave it a shot. Since the guys keeper, about 10 guys showed up to fish the jetty. I was in the bowl, and fishing water that was moving north and south, not just east and west. I was fishing this water like a river, and it paid off.
As I let my fly drop into the cut, it hit, and soon I was into my backing! I was fighting a nice striper in six foot waves, with a killer rip, that was help keep that fish off the beach. It was a great fight! I fish for 20 inch browns on 7x tippets- not 10 pound stripers in the surf. After a long fight I pulled the fish out of the wash- 29 inches !!!!!!!! It was a keeper, and I was keeping it. I am a huge catch and release fisherman, but since the fall of 2009 I have been fishing for one, one to eat, and today I caught tonights dinner. 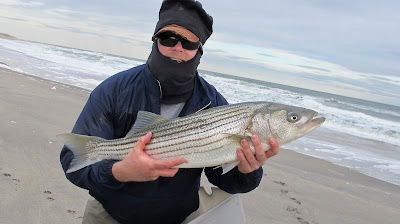 After measuring the fish and taking a few pictures I was back at it and fishing the same place and the same way. After a few more casts, I was into a bigger, and heavier fish. This was a fantastic fish and better fight. Soon I had a 33 inch fish that I was dragging out of the surf. After a few pics, I walked it back down to the surf and let it go. I knew the few yells from the other guys were their disbelief that I was letting it go. I have been in the hunt for a long time. I was looking for one, and thankfully I got it. I felt better keeping the one fish after I let the other bigger one go. 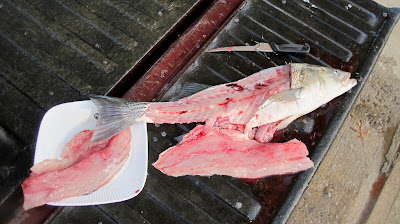 Posted by The Average Angler at 4:15 PM