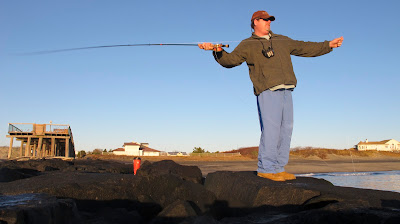 no spikes...no waders...no stripping basket...one rod...one fly. You hear about these guys that come down and with one cast hit on a big fish, or any fish for that matter. So, today I slept in till 7am and then snuck out without waking my gang and took a quick ride to Deal. First I stopped at 7-11 for a coffee. I got to Phillips around 720 am and the sun was up and the ocean flat. It was the start of the incoming tide so I walked out half way and made some casts. It was nice to just "come as you are and fish" even for a little while. There was one guy down by Brighton and the only other fisherman were guys on the charters heading up to the Shrewsbury Rocks. I fished for about 45 minutes, and made a stop in Asbury 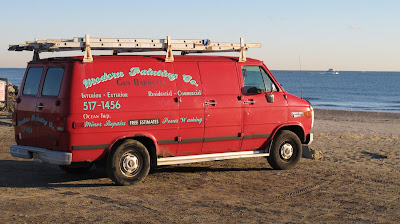 Park on the way home. There were two guys on 8th Avenue, one was Gus. If you know the 8th Avenue crowd, Gus is one of them. And his red painting van is always in the lot. I spoke with him a while and he said there is just nothing going on. One guy got a short yesterday after a small pod of bunker came through off the end of the groin.
We watched as a flock of gulls concentrated their flight patterns some target out off Allenhurst. Quickly a boat swung around and tried to find some fish underneath. Through the binoculars you could see the birds one something here and there, but the surface was flat and no sign of fish. 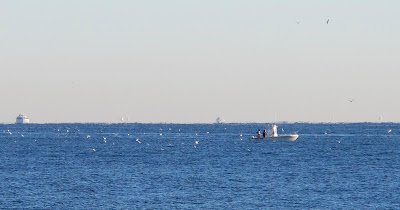 Todays bust out the Christmas tree and lights day, hopefully I won't miss anything.
Posted by The Average Angler at 10:21 AM