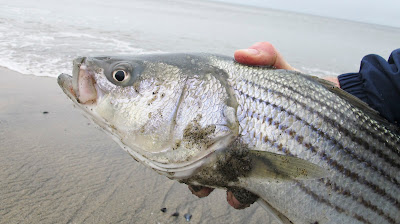 So I had the weekend to myself, a little fishing, a little work, a little socializing, I should be happy with that, right? However, in the outside world that would mean coming back to New Jersey, kissing the wife and kids, and putting the rods and all that is fishing away. Fine, I did that, but after putting my trout and salmon gear away, I loaded up my pickup with my striper gear. And, yes, went out last night around 8 pm for a bit. Snotty weather, big waves in quick sets, not a bite. This morning dad duty- so I missed first light. My buddy Al said he was going around 930 am so I thought I would join him. Al wasn't around, but the fish were. It was overcast, a little rain, but the water was flat. I hooked into a nice 25 inch fish after about a dozen casts into the wash, what little wash there was. After a few pics I watched as a guy pulled up next to me and let a "swimmer" go, as he got close to shore, a strike came that jerked me out of my rod, and it was on his. It looked like on National Geographic when the great white sharks breech for the seals they are hunting for. The fish was over 15 pounds, maybe 20. This picture below is it, it may not look big- but it was- 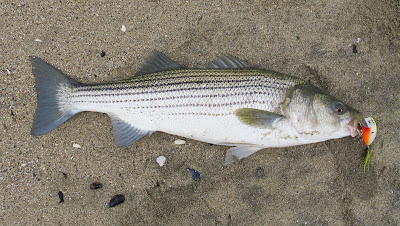 I moved down on the other side of the jetty and had fish breaking the surface- I didn't know if they were the chasers or the chasees. I kept at it even as the wind kicked up and the surf got dirty. I caught two more fish, a skate, and a what I thought was a shad. I was fishing near the bowl, where the jetty meets the beach, and this fish jumped on it. I first thought it was a small striper, then a bluefish, then a hickory shad. This time of year there is so much bait in the water and each angler has a thought as to what it is, and what the fish are onto. Another angler caught a bunch of the same fish, which he thought might be herring. So we pledged to go home and research it a little bit. Below is a picture of my fish, 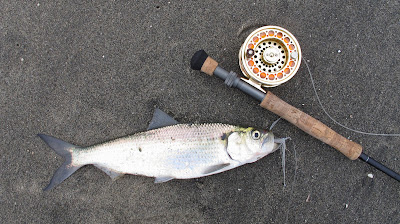 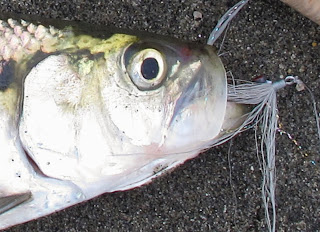 the reason I though it was a shad, a hickory shad, was because how pronounced the bottom jaw was. Plus it looked very similiar to the American Shad I caught this spring in the Delaware River. Here is one of those, with the pronounced lower jaw 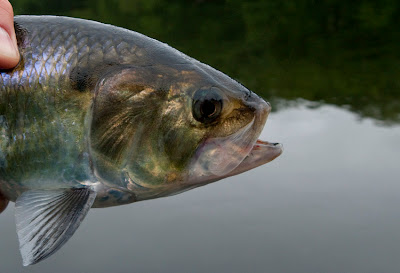 I found a website ( http://www.dnr.state.md.us/fisheries/fishingreport/shadherringid.html) that breaks it all down, here's what they got-
Commonly seen species of herring and shad in the Chesapeake Bay and its tributaries.

-12-15", preferring to spawn in slower and shallower waters.
-Big eyes = "Eye diameter greater than snout length" (the length from the eye to the tip of the nose).
-Peritoneum (inside lining of the abdominal cavity) is pale or creamy, occasionally with small light spotting.
-Overall silvery color, usually with metallic grayish green color on top.
-Scales are large and metallic and are lost very easily.
-Peak spawning time is March-April, with temperatures ranging from 53-72 degrees F. Peak spawning temperatures are 59-63 degrees Fahrenheit.

-12-15", preferring to spawn in faster deeper waters.
-Small eyes = "Eye diameter less than or equal to snout length" (the length from the eye to the tip of the nose).
-Peritoneum (inside lining of the abdominal cavity) is almost always dark blue or black, but occasionally described as "dusky."
-Overall silvery color, usually with bluish green coloration on top.
-Scales are large and metallic and are lost very easily.
-Peak spawning time is late April to May, with temperatures ranging from 59-75 degrees Fahrenheit. Peak spawning temperatures are 69-75 degrees Fahrenheit.

-18-20", noticeably smaller than American shad -key identifying feature: lower jaw juts out further than the upper jaw
-Coloration is silvery but tends to be more amber. Spots on shoulder are duskier and more obscure.
-Peak spawning time is mid-April through early June, with temperatures ranging from 54-72 degrees Fahrenheit. Peak spawning temperature is 59-66 Fahrenheit.

-20-24", noticeably larger than hickory shad -lower jaw does not extend further than upper jaw
-Coloration tends to be silvery. Spots on shoulder are more noticeable but usually only one large one is observed.
-Peak spawning time is mid-April through early June, with temperatures ranging from 55-68 degrees F. Peak spawning temperature is 64 degrees F.
So it looks like striper fishing will be good for the next few days. If you ever have wanted to try to get one on the fly rod, give me a call and we can schedule a walk and wade trip out, 732.261.7291 !
Posted by The Average Angler at 2:00 PM