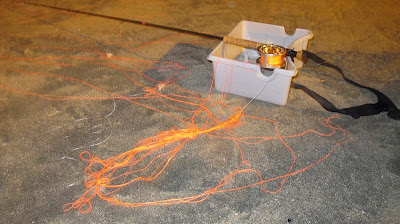 I was pumped and ready to go this morning. Woke up at 445 am before my usual 5 o'clock alarm set. I grabbed a quick coffee in Asbury Park and headed to Deal. Surprisingly I was there before a few of the early morning regulars. I had the whole place to myself. I moved in alongside the groin to find 3 foot waves crashing out beyond the cut, and an outgoing tide. I waded out to just below my basket and stripped some line and made a decent cast. Just as I started to strip the line in, my reel fell off and into the water, which was now over my basket. Last night I took my reel apart and cleaned and lubed it, I quess I didn't make sure it was back together. I can tell you this, with all the line and backing it must have been about 11 miles long. One more thing going for me, there was an outgoing tide and strong pull in the rip. Well after about twenty minutes of hand over handing my line and backing in I finally got my reel in. I tried to walk my line and backing around so it wouldn't tangle while the reel bounced in the surf.  forget it. It was a big tangle with a few mussels mixed in here and there.
I had to cut a large section of backing out and retie before I could fish again. I moved to a different spot on the beach and soon more guys showed up. I concentrated fishing off the beach and at the start of the groin. The birds started working off the end and those guys hooked up with some shorts. I stayed for a bit, but nothing 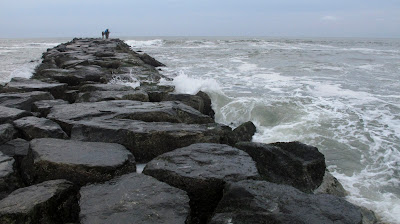 doing for me. It seems like the fish are not on the sand eels at the moment. Most of the fish caught are on bombers or metal are small, with a keeper or two mixed in. I think the bigger fish are down low, maybe taking advantage of the rough sur and keying on bunker or other baitfish. It was good to see the birds working overhead.
I moved down to Asbury Park to see how they did this morning. Guys caught fish, mostly shorts, and one guy a keeper that was still on the groin. He fished for many hours, first using clams for a while getting nothing. Then he started using peanut bunker he said he collected last week he on the groin at 8th Ave during the wild weather. I have to believe him, but none of the regulars ever talked about peanuts being around, or washed up on the groin.  His fish was about 34 inches, and I used my fly rod as a reference. I think tomorrow am I am going to lace up my spikes and fish off the groin. 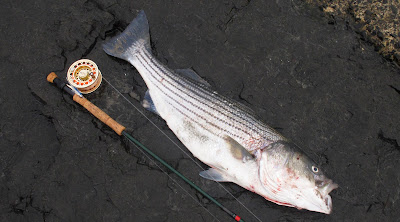 Posted by The Average Angler at 8:36 AM