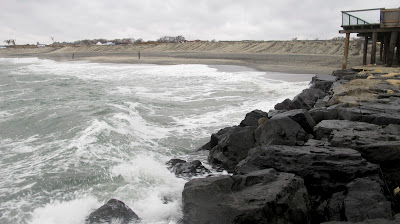 Phillips north
So after a nice Thanksgiving Day with family and friends and eating too much, It was a little hard getting out of bed this morning. It was drizzling and SW winds with an incoming tide when I got to Deal. One or two guys. Water was flat but tit started to kick up the time I left around 730. Fished Brighton and then jumped to Phillips where I fished both bowls on the groin. While I was on the north side I noticed some flashes in the water and then a boil or two. Then a fish would leave the water, small fish. I am thinking peanut bunker, but it could have been silversides. I switched from a clouser to a deciver and then a cool bunker fly that I eventually lost in the rocks after taking a second, just a second, to clear my line up around my reel. Had to cut the leader as low as I could. Got soaked in the process. So I think today is looking pretty good. Some snotty weather, bigger waves, wind not the best, but at least SW. And with some bait in the water maybe all those fish I hear about hanging off Montauk will start their way down to their winter homes. 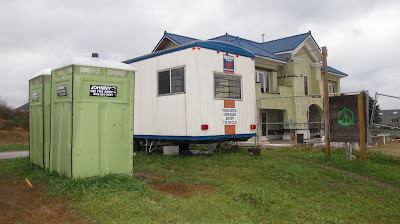 Since it is Thanksgiving weekend, I must give some less than serious thanks. Thanks to the contractors who left the Johnny on the Spot open at the house they are building at Seaview and Ocean Ave. Much appreciated, in a hurry. And, just a tip, not that it happened, clear your wader suspenders before you squat. Yuk!
Posted by The Average Angler at 8:03 AM