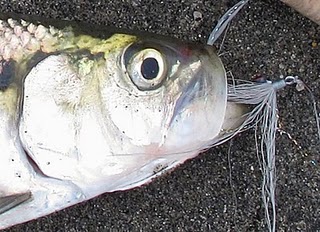 Remember this fellow I caught a few weeks back. I thought is was a hickory shad. A few other guys caught the same and they thought it might be a blueback herring. I put the question out to several guys who said they would get back to me after leaning towards it being a hickory shad.

Well, tonight I asked Shore Catch Guide Service Captain Jim Freda who confirmed it's a hickory shad. He also added that we don't see bluebacks this time of year but that soon, Atlantic herring, aka sea herring, will be arriving by the millions and the big bass will be pushing them up to the surface. He also said when you see the gannets dive bombing, it's the herring they're after. Thanks Jim.
Posted by The Average Angler at 12:29 AM