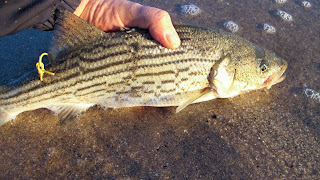 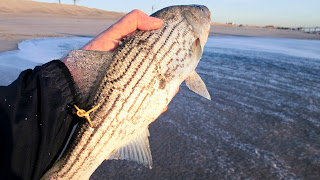 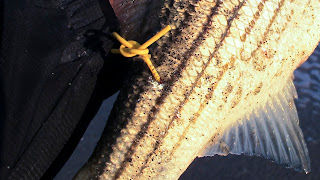 Beautiful morning fishing the outgoing to low tide. Pulled up and I could hear the thunderous waves still crashing on the beach. However, as I made my way to the surf I was pleasantly surprised to see a relatively calm ocean and water that was almost crystal clear. What a change from the last five days. That system is still offshore, but it is weakening, but there might be something behind that one, we'll see. fish were around, most guys fishing off the jettys past the breakers caught fish on metal as the stripers were on the sand eels still. I saw a guy with a fly rod hook a shad off the jetty. I concentrated my efforts in the wash throwing clousers to a hopeful beast cruising for breakfast. Found a nice sand bar point where the water broke right and left and washed right into a jetty, well groin, on each side.  Didn't see a fish break the two hours I was out. I was able to apply my first tag to a short striper. As a member of the American Littoral Society, www.littoralsociety.org, they tag stripers and collect data after the fish is re-caught, if the angler sends in the tag and info. Some of the catch-release-catch info is really cool and interesting. So my first tag was to, or into, a 16" striper. It may look like no big deal, but it's easier said then done. So one day, we'll see if this fish is re-caught and what size it grew too and where it was taken.
Maybe today will be the start of a good week. Today the sun is going to high and bright, with the midday high tide around 130 pm.
Posted by The Average Angler at 8:37 AM