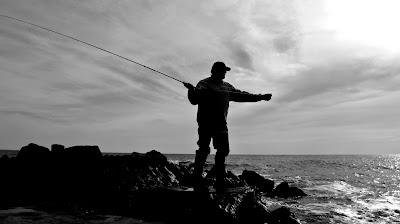 I am sure we all remember what is was like getting sent down and standing in front of the principal. Most times, if we were smart, we would just stand there and take our licks. I am also sure that most of us fishing addicts have to stand in front of a girlfriend or wife, once, or twice, or several times per year and hear the music. I've never had to hear it, until today. My 2000 Dodge pickup is having problems, 165,000 miles, a newer trans thats not working, needs a fuel pump, yada yada. So I casually mentioned that I might take a ride over to see what kind of numbers a used pick up might be. Well, that was not good, it went from pick up to unfinished honey-do lists, to fishing, and then photography and then where ever else. I just stood and smiles, guilty on all counts. So I just put on my waders, gave her a smile and a kiss and left, to become one with the stripers even for just an hour or so. 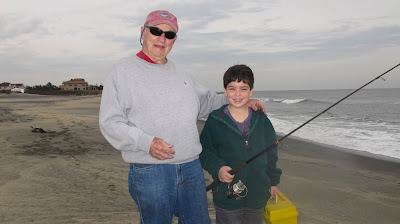 I was alone in the lot and Rich pulled in and I guaranteed a fish, well I said two, off the end of Phillips. We my spikes on out I went, crystal clear greenish water, nice high sun...well I caught or saw nothing. I worked my way back into shore and found my buddy Al with his grandson Matt ready to slay them. Right before I left it became overcast, the waves kicked up, the wind shifted from a SE to SW. It looked really promising. After some pics of the two I fished the wash and not a bump. BUT, those fish are on their way from New York. I hope you're not going to the Thanksgiving Day Parade in NYC, beacuse, just my prediction, you will miss something special along the Monmouth County coast.

DISCLAIMER- The above prediction is based on no sound evidence.!

Posted by The Average Angler at 1:24 PM