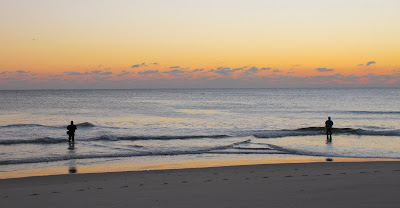 Finally went to sleep around 1230 am after posting last nights blog. Around 4am I started dreaming of big bass in the wash. As I concentrated on my dream I could make out the piers from the boardwalk in Seaside in the back as the stripers blitzed in the wash. I know, I'm nuts. So I gingerly got out of bed and made my way down to Seaside Park and parked in municipal lot next to the pier. There wasn't a soul around. Can't figure why it was a balmy 34 degrees. So I geared up and made my way down to the water to find an incoming tide just starting to bring good water over the sand bars and into shore. The only killer was the ocean was flat, and stayed that way the whole time I was there and later as I drove back up north. I fished for about an hour and when I couldn't feel my feet I decided to get out and move on. I met a guy in the parking lot who said south of K Street has been good. I wanted to see 9th Avenue where John from Betty and Nicks does his morning reports. I drove down and found guys spread up and down the beach. No birds working or fish, well I saw one about 1/4 mile out, doing anything. I fished this nice bowl but 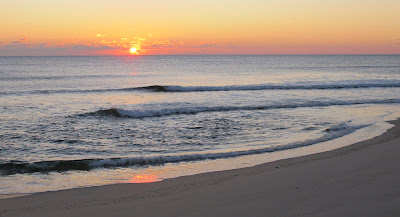 didn't get anything. In fact I didn't get anything all morning, nor did anyone else, maybe 75 guys I saw all morning up and down the coast didn't get anything either. But that doesn't mean it won't blow up later. I traveled up the coast and talked to some guys, they had a few fish close to shore at Downer, Lyman was dead, Bay Head quiet, that after a guy caught a 29-1/2 pound fish there yesterday, and the Manasquan Inlet was quiet except for some charter boats heading out. So here's some numbers out of Betty and Nicks 11/26 report, 15, 9, 29-1/2, 9, 12, 15, 21, 13, 16 pounders plus more - from Bay Head to Island Beach State Park taken on a mix of clams, herring, bombers. 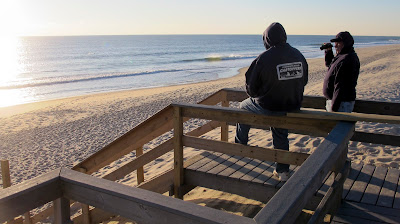 Scouting Lyman in Mantoloking
Posted by The Average Angler at 9:09 AM