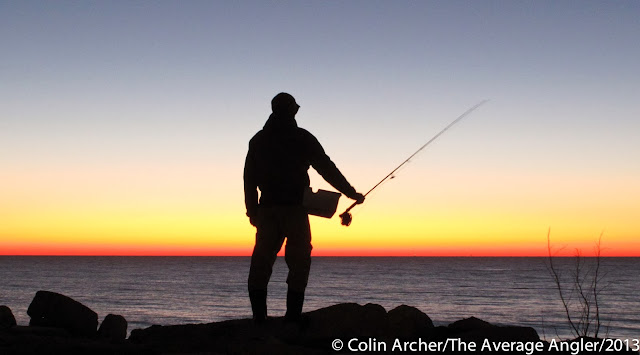 The details of todays trip actually started yesterday. I am in the process of cleaning and organizing my basement, and my life, which probably would make a good episode on the TV show "Horders". But with the guiding season over and the new year and all those resolutions that I'll make looming I figured I'd start early. And I have to say I'm impressed with myself, as a lot of my "stuff" some which I've held onto for years, is making its rightful way into the trash. 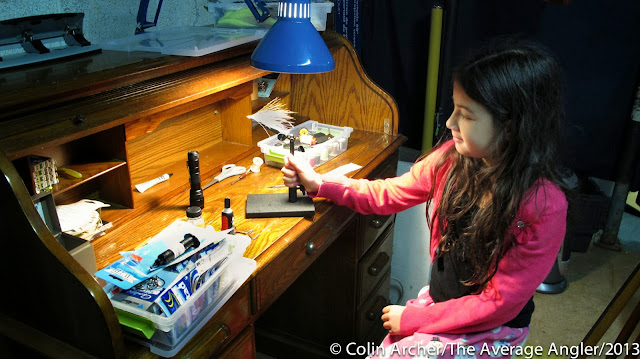 At one point my ace number one helper Erin said, "Dad, I want to tie a fly." Work came screeching to a halt since moments like that call for quick attention. We set up her vice at her fly tying station and co-tied a simple orange over white Deceiver-ish fly. I told her I would use it this morning and try to catch a fish with it. I had some faith in it as that color combo had worked on winter bass the last two years. 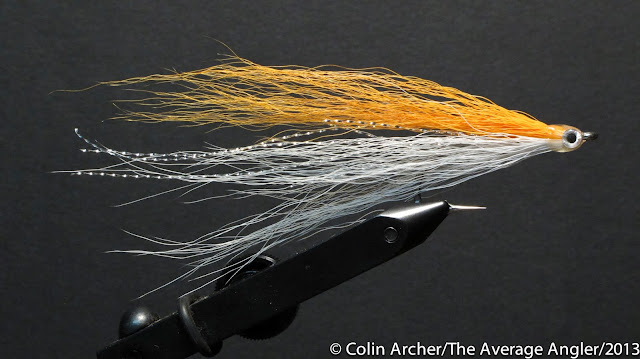 When I got down to the beach it was beautiful. Nice first light, mid ebb tide, lots of moving water and just enough surf making white water. I topped off Erin's fly with a Pulse Disc to give it a little action as I planned on hitting the troughs that were looking real fishy. On my third cast I went tight and landed a nice 20" striper. With the fish swimming in the trough I went for my camera but it was buried in the bottom of my Gale Force pack, so I passed on the pic and released the fish. I was certain there would be another so before I made my next cast I readied my camera. I made a cast and went tight.....on a piling buried in the water. I tried to get the fly free but I snapped it off. Nice job dad!

I tied on an other fly and crawled my way out on the tip of the groin and landed another and missed a few more. The morning was going great. Even though I'm not a big one for leaving fish to find fish I did, having in my mind a nice pocket that holds water even at low tide.
I made a cast and caught a small sub 20's bass and on my next cast had a hit. On the next cast, on my backcast, the fly line went one way and my fly another way. This time of year I tend to use my B and C team lineup of flies. Those that are beat up, chewed up, and twisted up. I tied on a knarly looking white Snake Fly thinking that my buddy always does well with a bucktail. First cast, strip, strip.... tight, real tight. As I went on the reel and started to climb down I knew I had hooked a keeper sized bass. That's why you come out, you just never know. I played it like a champ but it felt weird. As it came up I realized my keeper was Clearnose Skate, raja eglanteria, that I had snagged in its tail.

It was what I was targeting but I did learn where my weighted fly and sinking line was swimming in the water column. Maybe the schoolies weren't looking down that low. 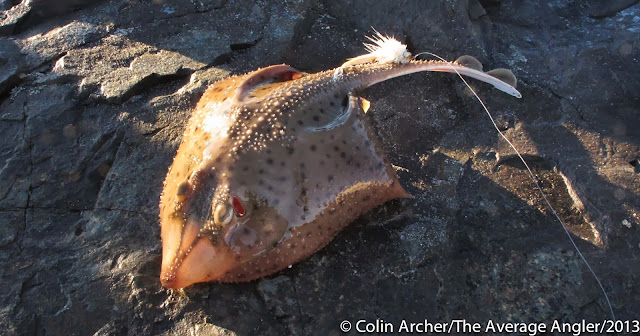 Posted by The Average Angler at 10:20 AM