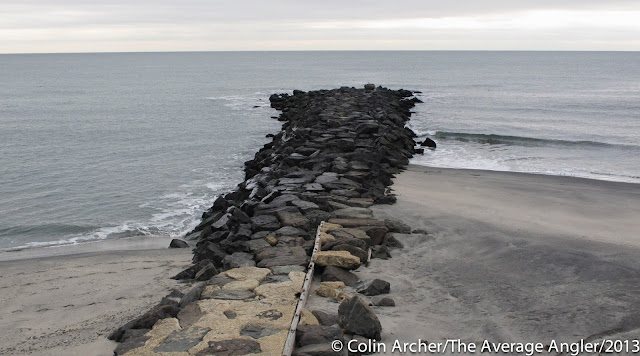 I think the large lady has sung. After a week of a steady pick of schoolie bass, and a 33" bass my friend Jimmy caught, things have shut down. Yes, maybe there's one or two left, but, I am calling it. Does that mean that I won't fish again this winter? Probably not, but in my gut I am feeling like it's over.

What do I base this on? Nothing scientific for sure. The next week we'll have a mini warm front with temps in the 50's through the weekend which might just turn things on for a bit. But I feel like we had a large mass of schoolie bass that hit the beach and they have either moved out or moved up into the Hudson. Water temps are ranging somewhere between 42-45 degrees depending on where you get your stats from, which isn't all that bad. We'll need some bait around if we want to keep the bass in range from the beach and the rocks.

Fished hard this morning from dark till a few hours of the incoming tide. Didn't get a bite. One guy said he caught a bass after a 1,000 casts. It looked good if you could find some current on the end of the outgoing but it was relatively flat and just plan downright cold.

That said, I wish you luck out there, don't count me out, but when and if I do go its to get some air and some exercise, as my anticipation of catching any more bass this winter has left.
Posted by The Average Angler at 9:37 AM