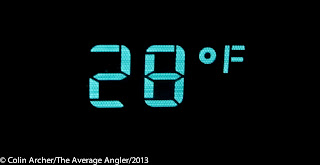 If you braved the cold temps this morning you most likely rewarded for your efforts. It was a steady pick of short bass for a while before the north wind picked up and it seemed to get colder. There was a handful and anglers out early and each one was hooked up on several occasions as I watched the action from the rocks. Low and slow retrieves seemed to be the ticket as the fish bit just around sunrise. Just before leaving a flurry of bird action raised the hopes a bit but nothing came of it. Just when I thought I was cold and done found some fishier looking water that wasn't there when I first got out at first light. Again more of the same with anyone with a line in the water picked up a few fish. Seems this week if you could find good water and were willing to move around a bit you could get into a few fish. Lets hope todays cold front doesn't shut things down.

Posted by The Average Angler at 9:56 AM