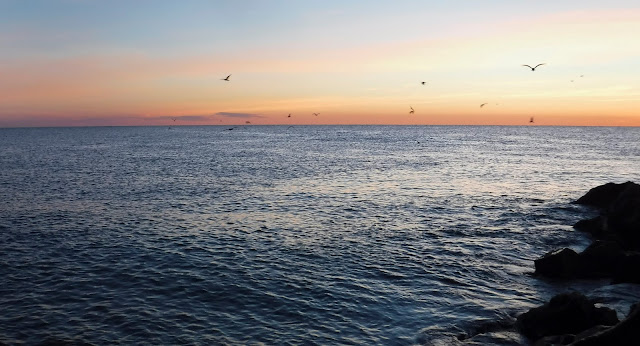 Alright, I don't know where to begin, so I'll start with the end. I was really off my game today. I sucked. I couldn't get dialed in and get it done. I didn't catch a fish...... and I should have.

I went south today with a friend and the 37 degree pre-6am air was just plain cold on your fingers. The Atlantic was a lake, a west wind had things laid down and there wasn't but some ripples on the water. As we looked out I switched from a light sink line to an intermediate one and from a black Deceiver to a silver Banger. I made a bunch of casts, and Richie did also. We met back on the beach talking that things should start up soon in a few days with the moon and lower water temps. Then I went my way and he his, close enough to see each other, but out of earshot.

I went on the rocks and he on the beach as light arrived. There were birds flying around looking. I looked over to Rich, and in my amazement, I thought I saw a bluefin tuna at his feet in the wash chasing bait. I had to do a double-take. But it wasn't, it was a lone 30 pound bass. And then it was gone. It swam away without touching his popper. But then her friends came.....and they didn't stop coming. 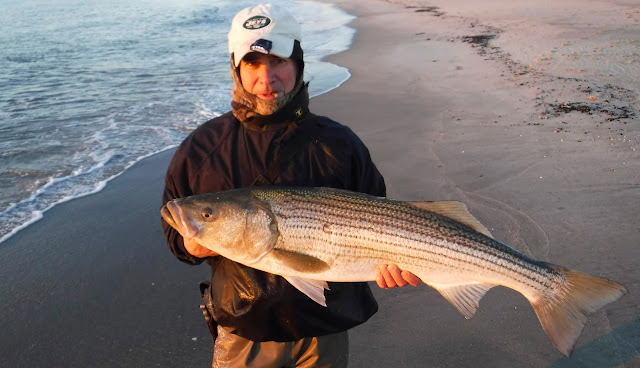 The birds were everywhere. The peanuts were flying everywhere. Rich got a nice 25 pounder way out that took him a while to land on the beach. You could see the bait get nervous and then just big teen to 20's and maybe 30's crashing near and on the beach and pockets. And they would stay for a bit before the bait escaped. So I had really good shots. At one point it was right at my feet, in fact one big bass ran into my waders. I was still with the intermediate line and the popper. I should have changed. So I did. 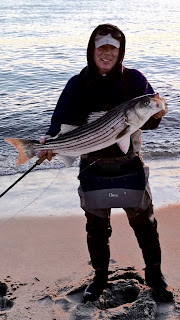 I waded out to the notched groin in Bradley and made my way up. Total blitz. I wish I had no rod in hand today, just the right camera set-up. It would have made for some great images. But I changed flies, went with the A.W. Hollow that I used on the boat the other day. Maybe a 15-20 pound fish followed it on a slow retrieve and ate it.....I set the hook.....and my knot pulled. It swam away with the fly in its mouth. I watched it.

It lasted for a long while. But I was just off today. Had to tip my hat to the fish. There were fish from Sandy Hook down to Island Beach State Park. The boat guys crushed them, and the shore guys did too. Later in the day I saw a lot of dead bass sitting next to trucks or on the pavement as I drove up and down Ocean Avenue. There were a lot of fish here today, and a lot taken, I hope they don't go to waste. Word of the bass' arrival is already out and tomorrow on the beaches could be another shit-show Day 2 following a fantastic Day 1 where I was alone and the fun to myself. Maybe tomorrow I'll have my shit together and get it done. 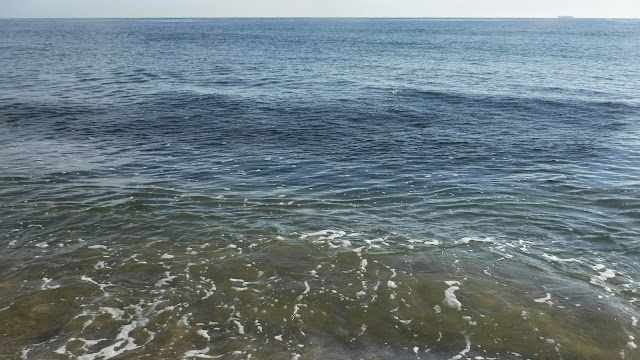 Posted by The Average Angler at 5:38 PM