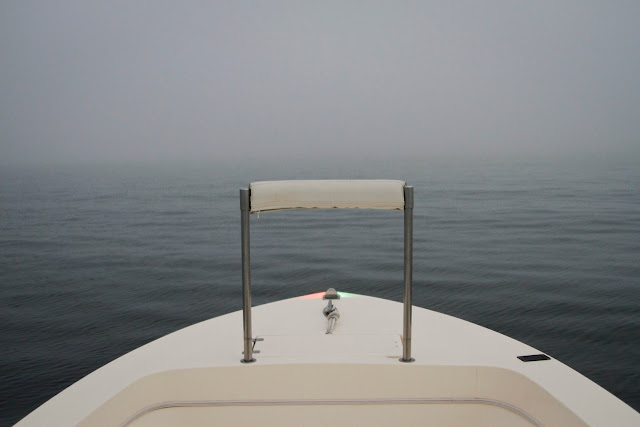 So I didn't like the tides this morning for beach fishing. I figured I'd get out on the boat for a bit. I checked the weather and I saw the biggest band of rain was moving out west along the Syracuse corridor. That was at least last night.

I got down at 6am looking to catch first light out front. I knew I needed gas because my last outing was a fuel burning run around the area. I dropped in and went to the fuel dock. "Winter Hours 8am". So I went anyway thinking I would catch first light albies and then duck back in for fuel before going to look for stripers.

I started out and was met with pea soup fog, that got soupier as I lost sight of land and lights. I took a slow ride and when I could make land I could the birds were up and working and bait being sprayed by hickory shad, small blues and albies. I had some good drifts on the strong incoming and also a few good shots where I landed the shad and bass but no tunny. Then the heavens opened up and the fog got thicker.

I was wet down to my bones and knew I had to get fuel sooner than later. I followed a boat in with triple 300's, but it wasn't easy as the big raindrops kept my eyes squinted for most of the ride in. At the dock I checked the weather and the band was moving south to north and was still just north of Atlantic City. I don't mind the rain, but the rain and the fog just keeps me uneasy. 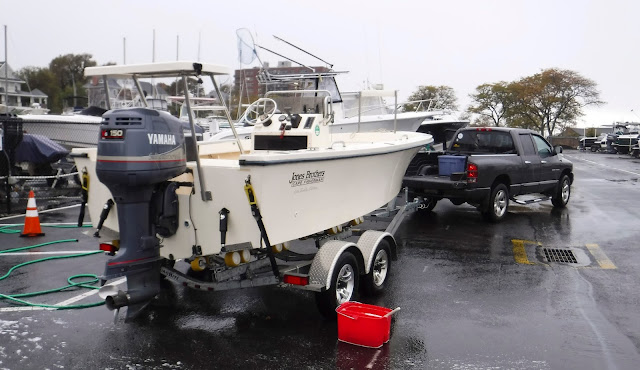 I pulled the boat and went for fuel on land, and I am glad I did. It took 46 gallons, which is 8 shy of the 54 gallon capacity. I have to have the fuel gauge checked because it didn't reflect the little amount that was in the tank. As I cleaned the boat, the skies lightened up, but the heavy fog stayed. I thought of just hugging bay beaches, but I was soaked, everything was wet, and I just called it a day.

I am glad that I was right that the bass wouldn't be in my favorite spots today because of the timing of the tide. That was until Lief sent me a photo of the fish he got this morning. Maybe I have to just stop trying to out smart these fish, because it seems it never works. 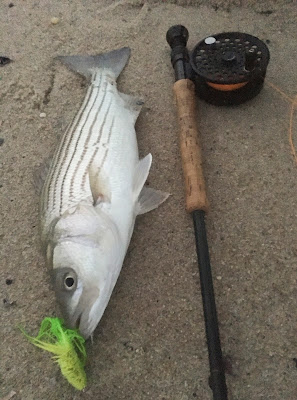 Posted by The Average Angler at 12:19 PM