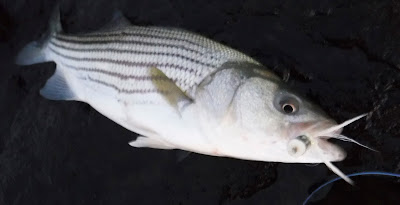 I'll start with the good stuff. Slept in today, well at lest for me, and was on the rocks at 530. Nice conditions, maybe too nice, with an incoming tide and a SW wind. Lakelike with occasional big swells rolling. It was perfect popper water and that's what I went with. I landed one and had two others with angry interest. I was joined by Richie who went 0-0 until we moved down the beach. He was spin fishing, which doesn't count, and he landed the below beautiful 31" fish after a real good fight. Didn't see any bait and the birds were just looking as we were. His casts had his popper out before the breakers, which came in two a time. 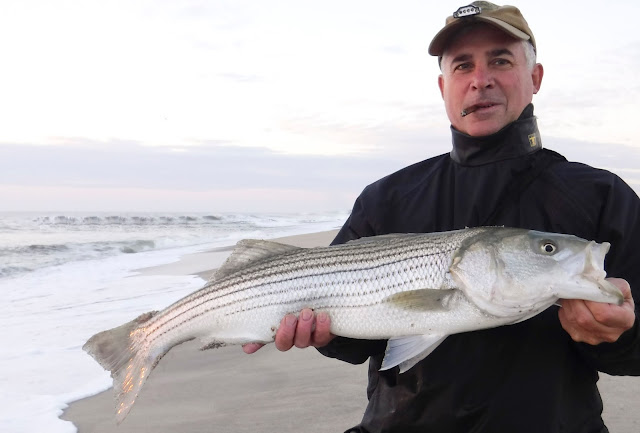 So now the sad part. Yesterday after looking at the forecast and the tides I figured it would be a great day on the boat with my most elder fishing partner. We haven't fished together in over a year and I thought today would be the day. We were going to give it a go in June but got blown out by the weather.

I sent him a text and got all of my boat stuff ready for the outing. I figured I would hit the beach, pick him up, and then catch the outgoing in the Bight. I received a text from him saying that he was going to take a pass on today. I sent him a return text and a phone call which went unanswered. At 920 he called, and I listened and heard the concern in his voice, coupled with disappointment. He wasn't sure he could physically do it, and more bothersome was, that he hasn't fished in some time.

What got me was that I could tell he misses it, and the guys, immensely. He has been distant, and I realized, that the glue in our friendship was the fishing. When I knew that there was no convincing him, I let the conversation end. He asked me if there have been any fish around, and I hesitated, not wanting to tell him how things have been. With his question I knew, too, that he hadn't been reading the blog. He said the best way to deal with it all, "was abstinence". Which meant, to me, a clean break from seeing the water, trying to fit, and contact with me.

I told him to give me a call before 8 if he changed his mind.....but the phone never rang. After I was done on the beach I headed to the marina, but made a stop on the way up.  I found nothing doing, but did notice the changes the week and a half of swells had done. As I walked I realized, I didn't want to go on the boat fishing, I just wanted to fish with my buddy one more time. I spent countless hours with him over the last half a dozen years and every morning I would pull in and hope to see his car there and him fishing in the pocket. Those mornings are some of the best memories I have of fly fishing the salt water.

So today, maybe we left them out there and biting, we'll never know, cause today was our day. 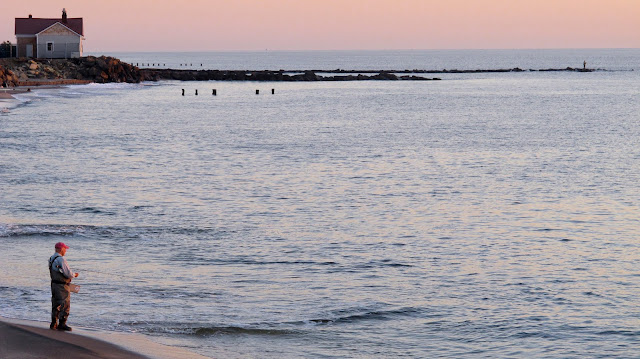 Posted by The Average Angler at 10:24 AM