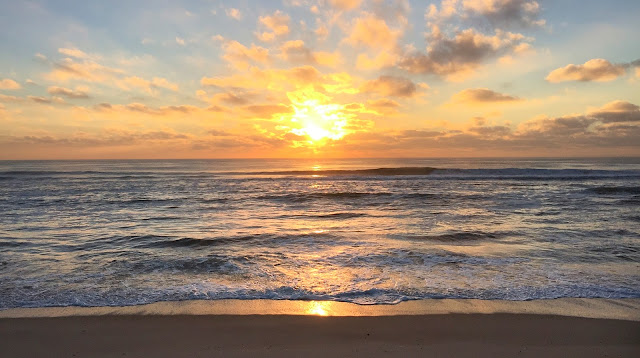 Well, I planned on just getting up and getting on the water about 530. Then I started to think about the tide. Low tide was somewhere just before my planned arrival. Okay, so I went to bed. Then I must have started dreaming about the outgoing, in the dark, and how the flip of the incoming wouldn't be until after first light.....then I fell asleep.

I was trying to think like a fish. I was starting at 330, just shy of two hours left on the outgoing. So I picked my first spot. A dozen casts later I was on the move. This spot seemed more fishy but I didn't get a touch. I walked up the beach to a spot I had done well at a few weeks back. I inched my way into the water, and then swamped by a wave. As I fell back onto the beach scarp I could feel the water between my waders and my jacket, then I felt myself moving. I went up a few feet and then down with the water. All I could think about besides being soaked was my real camera in my backpack and my iPhone in the StormR pocket. Luckily both were dry. So with sloshy waders I walked back to my truck to spot number 3.

Still in the dark I realized this wasn't a low water spot. It was fishy, if the fish liked to stand still on the bar in a foot or two of water. So, of course, I made my through the trough up onto the bar. Every now and then a good wave would come in but I could see it. What I was doing was just casting further out onto the bar, not able to clear the breakers and the deeper water on the other side. So as I'm fishing a good wave breaks and rolls in, the type that pushes your stripping basket up and just takes the weight off your feet. The problem was, that wave continued up to the beach, and then came back. It met the wave coming in right on the plane where I was standing. I was drenched again. So I made my way back to my truck.

I headed north and made a few casts in the river with the tide still ebbing, not a bump. So, finally, with moist sock and crotch rub in effect, and first light just arriving, I made my way out front to really fishy water. Aaahhhh.....what a relief. This is where I'll get it done. Fished hard as the tide flipped. I really couldn't complain as the sights were beautiful. I saw no bait, and the only fish I saw was a school bass that blew up on my fly as I lifted it out of the water. Really? So I fished that trough for another 30 minutes.

Just when you think you're dialed in, and know, or think, that you're thinking like a bass, you have days, well nights, like this. I knew it would slow after the blow and the mullet run died. There's still a ton of bait in the back and soon they will flush out and hopefully meet the fish moving south. I'm hearing there's big blues out a ways so hopefully they move in and give us something to fish for before the bass show up. 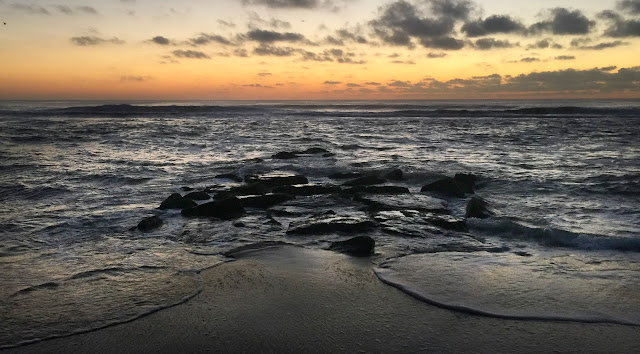 Posted by The Average Angler at 11:05 AM