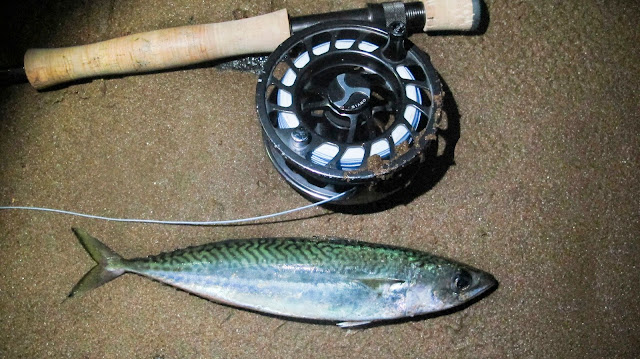 ........or a midnight snack. Did the 830 pm to 2 am shift. Had talked with a guy from the Asbury Park Fishing Club yesterday as I came off the beach after another who skunk who told me he had been doing good in the back.

I was hoping to get in on that action. I had the three tides figured out and caught them all at the end of the incoming/slack/outgoing. There were some guys getting ready and when talking they all felt....."tonights going to be good". And with that I left the first spot and went to another. 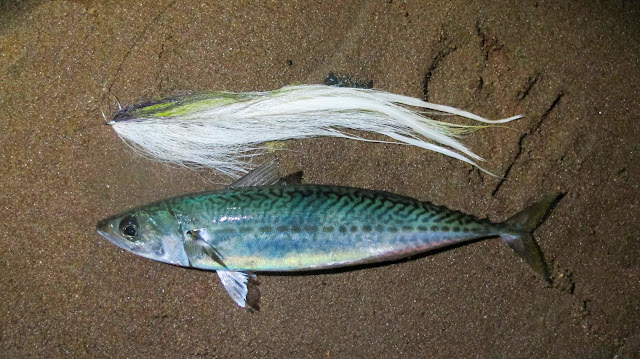 It looked good. Almost zero wind, flat water, dead low tide. If there was something eating you should have seen it. I thought I was watching mullet or peanuts swimming around and in between my legs but I was surprised to find out it was mackerel. In the back that's a new one for me. I was tied up a weighted black Snake Fly and realized it would be a smaller offering if I was looking to match the hatch. I went with a larger Andrew Warchauser hollow fly and in the water it was a near perfect match.

Problem is the bass never went off, didn't see swirls, but did see schools of the bigger bait hurridly making there way around. So it was back to spot 1 and that never went off for those guys. They did get a few fish at slack. It was then go home or go big. I drove down to the beach and it was flat and windless. I worked a popper up and down the beach and scored one little guy before calling it quits just before slack.

I wasn't done with the punishment so I went into looking in the bay hopeful to find a bltz all to myself......an early Blitz-O-Ween, but that didn't happen. 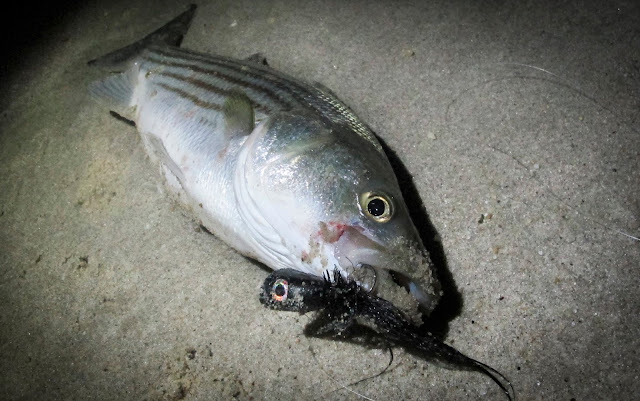 Posted by The Average Angler at 7:11 AM