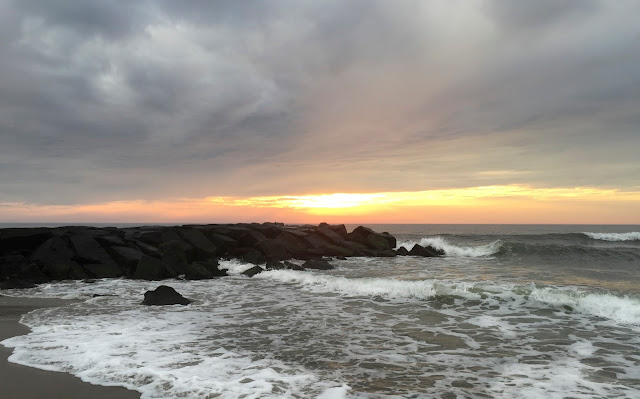 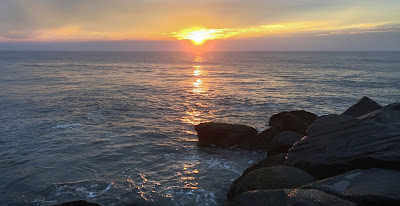 Headed south, which is what I mostly do every time I fish now, and hit a place where the effects of beach destruction have been slightly changed by time, tides, and Mother Nature. Got in the water at 5 a.m. and joined a spin angler who had released his second bass. I fished hard over the next hour and a half, trying a SF Blend baitfish in black, a Banger type popper, and then a Jiggy because of the small bait that was appearing occasionally along the rocks. Missed a fished as I lifted the fly out of the water, could have been a fluke but I wasn't sure. At this location I didn't notice much in the way of any structural change since Hermine.

I worked my way north, which is what I have to do if I drive south to fish, and stopped by a few old favorite spots. Here I noticed more changes, lots of sand filling in the south sides of the groins. and hollowing out the north sides. All good changes, I hope to see some more after a few more fall storms. While on the scout I did manage to find a few snappers that were into the Jiggy. 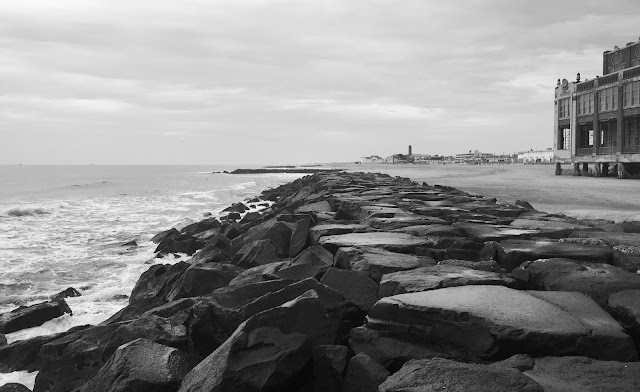 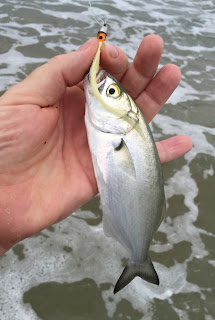 Not wanting to be done because it was looking fishy, I decided to painfully return to my favorite "home". The effects of the destruction of Jetty Country are evident at each placed I stopped starting with Allenhurst. I decided to park and walk the long wide beach over where the rocks were buried at Hathaway and walked north to where the machinery and outflow pipe construction and sand pumping still continues. The march is one from Phillips to Lake Takanassee. 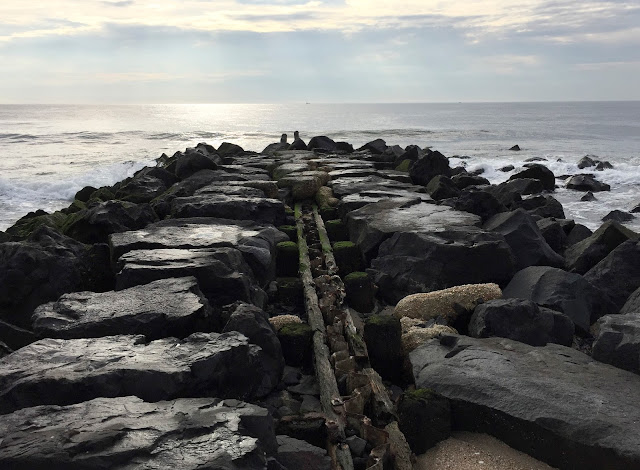 During my walk I stopped at the start of an old groin that I spent countless hours on for several years. Although the start of "beach end" was a hundred or so feet from where I used to climb up on it, it felt good to just look out into the ocean and start my trek out. I used to remember where every rock was, and the path to get to the tip was programmed into my mind. Not any more. I did find an old favorite rock, not just for me, but for many, including the fly anglers who would be able to clear the other rocks when retrieving in tight. 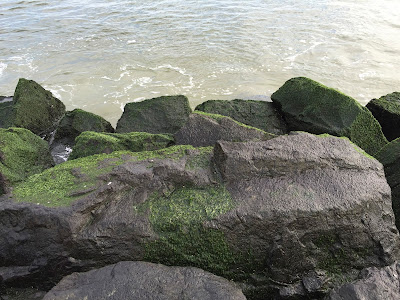 For just a few minutes I was able to focus straight and at times a little left and right, keeping my eyes off the beach and the unfamiliar terrain. I missed the days when I could identify the guys I seem to fish with every day, all of us part of the "Phillips Ave Gang", which we named ourselves one night out for drinks at Mister C's before Sandy blew it a part.
Even in low light you can identify your fishing buddies. Either by their location, silhouette, what they were using, and their casting stroke. I miss seeing Richie and Bucktail Jimmy on the rocks, Andy throwing lefty covering on days what seemed like miles,  Bob tucked into The Hump, Lief swimming Snake Flies up near the pilings near the outflow of Poplar Brook, and my favorite old man Al, either with the fly or spinning rod, at it almost daily as he passed the tender age of 90.
Like I have said before, they killed Jetty Country, killed a habitat, suspended a vibrant fishery, and helped change friendships and relationships that were formed. While we weren't friends in the true sense of the word, we didn't hang out or go over each others house for dinner per se, we were fishing friends, good fishing friends, that was the glue that held us together. Sadly, it will take time for us to return back "home". Some of us may not return, but I miss those times, mostly first light times dearly. 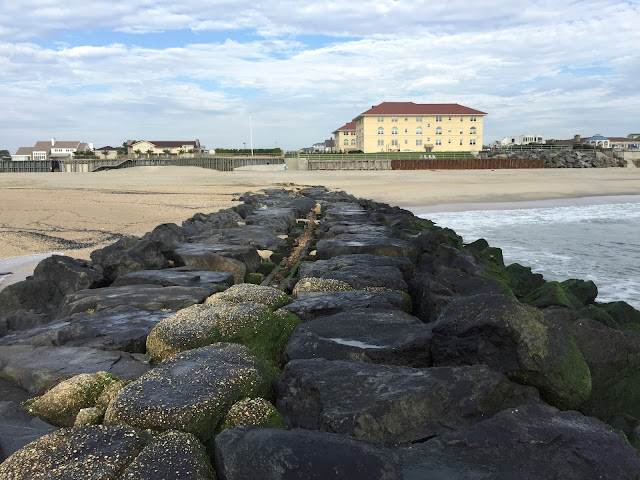 And what do you know, as I stood there thinking of what I was going to blog about, a familiar face shows up, and I should taken his picture. It was Andy. No rod in hand but he was walking the beach looking for sharks teeth. It was good to see him. Good to ask if he's seen the other guys. And good to ask if he's been fishing.
People ask me often where my favorite place to fish is, and if I could fish anywhere, where would that be? This is favorite place. Walking and wading, say Long Branch to Spring Lake, with a few good friends to stop and talk to along the way.

Above is the view of Pullman Ave. Lots of sand in front of the wall. I can confidently say that there will be no Halloween Blitz happening here this year. There are no pockets for the good fish to trap bait fish into. Sad.
Posted by The Average Angler at 9:06 AM