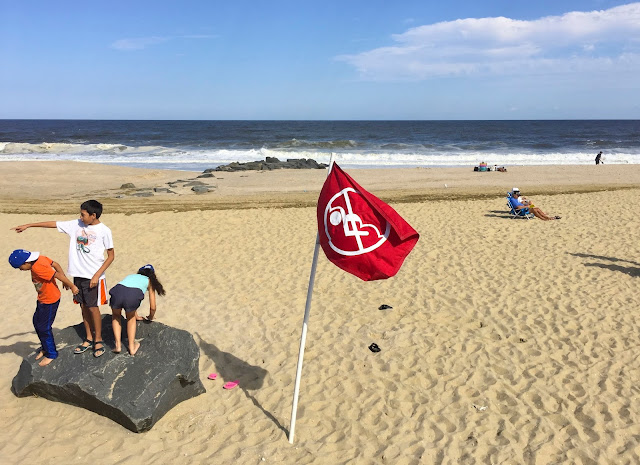 Everyone along the East Coast was bracing this weekend for Hurricane, Tropical Storm, or just plain old storm Hermine to wreak havoc. Luckily "he", and I think he was a he, moved out and didn't bring the wind and waves and big surf that could have left a destructive wake in its path. There was plenty of sun and happy people along the Jersey Shore today, but I bet it scared a lot of beachgoers away and also blew a good weekend for business owners from Sandy Hook down to Cape May. I spent most of my weekend at work in the psych unit. After work today I went down to the beach in Long Branch and found the above scene.
I do hope that on the bog tides the waves carve up the beaches a bit. Summers gone. The wide swathe of sand that was created for the season can now be swallowed up but the sea, although the damage to the ecosystem if far and wide. I can say that the above Jetty was exposed, then covered, and is now shown again. While this won't do much to improve conditions here, hopefully south of here things might improve.
Structure holds bait, and bait attract predator fish. Soon the bait, and there's a ton of it, that is in the bays and rivers and has been growing all summer, will start their migration out. In a week or so we should see things cooling and moving. On September 16th the Harvest Moon is always a good time to start things off in the fall. Allies and bass and blues should start to be caught, and the last fluke of the year can be taken until September 27th.

I miss being on or at the water each day, making some images, and writing this blog. I know I have lost the daily faithful, but hopefully there's still a few that come by from time to time to catch up.

Posted by The Average Angler at 7:50 PM