05.29.13 Bass love a Montauk Monster swam behind a Pulse Disc 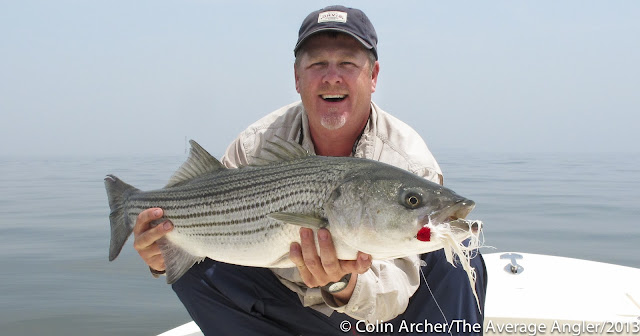 I was getting a little tired of all the pictures and stories of how the Upper Delaware has been on fire this past week. Okay- maybe I wasn't tired but a little jealous. While up there last week the Green Drakes had sporatically started to come off, well this week, they exploded. This week it's been Green Drakes and Iso's- with lots of big fish coming up to eat. Well....good for everyone up there. I say enjoy your wild brown and rainbow Upper Delaware trout......my stripers eat those cute fish for a snack!
Got out to scout this morning with some sketchy looking clouds around and made my way out front to find....nothing. I saw some boats all clumped up but they were fluke head boats drifting along the beach. I saw a handful of birds that were flying. I saw some dolphins enjoying a swim. I saw a lot of bunker flipping happily without a worry in the world. That went on till the end of the outgoing. Then the tide flipped, and things heated up. 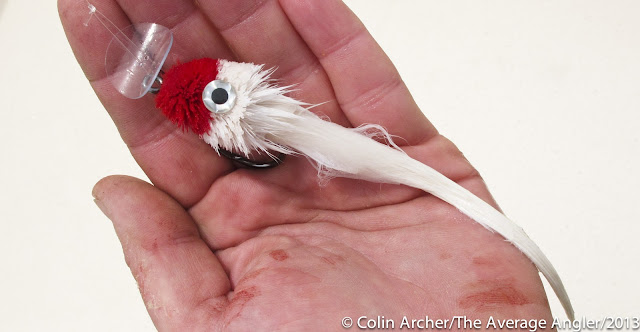 I had a couple of fly rods rigged up. My go to rod today was my Orvis Access 12 wt paired up with a Mirage reel, a 6/0 Montauk Monster, HERE, trailing behind a BrineFly Pulse Disc. I have tested and used these with some success and was looking forward to dredging it behind a big fly going for some big fish. Well today it happened. As the tide turned and the fog rolled in the bunker started getting a little nervous. I dropped the fly down with the Depth Charge 650 grain line and started my series of retrieves and line feeds. With the bunker active and the screen blank I just did my thing, until I went tight, and then the screen lit up, and the big blues started crashing the bunker.
By the time I had the fish to hand the bunker had stopped, the screen was clear, and the sun came out. It was over. After reviving and releasing the bass I went and looked for the school of bass but they were gone. It didn't matter as that one fish was enough for me for today.

I have openings tomorrow Thursday the 30th and Sunday June 2nd for fly fishing catch and release only trips in the river, bay or ocean. Give me a call, tomorrow is going to be a great early out day on the water 732.261.7291