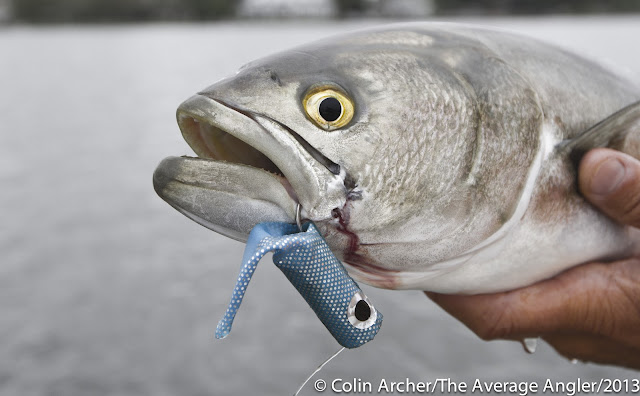 When I woke up this morning I first had to remember I was back home. I looked outside and expected to see more weather than I did. No wind, no rain, just overcast. It was the last hour of the flood tide so I grabbed my saltwater gear and pushed my freshwater gear over on my truck seat and headed to the beach. It looked dead. Off color. No birds. No bunker. No tossing bass or blues off in the distance. Nothing. I spoke to a few guys who'd been out since 5 am. Nothing. Just dead, as it's been slow for the last few days outside of a pair of blitzy evenings where the big girls chased in the bunker. I heard of fish to 40 pounds caught, and kept, and some released. Two nights worth of harvesting, and then the boats had a shot at them during the day....how does this species survive? Alright, enough of that.
We jumped in the boat and headed to the river to see if we could find a bass, as we knew the blues where in there and would be easy to get to chew, well chomp. It was still windless and the clouds and rain were out and up to our north. We hit them with topwater poppers and they followed with some swirls and vicious strikes. The largest came in at 30 inches, which depending on your chart, come in anywhere from 12-14 pounds and is 8-9 years old. 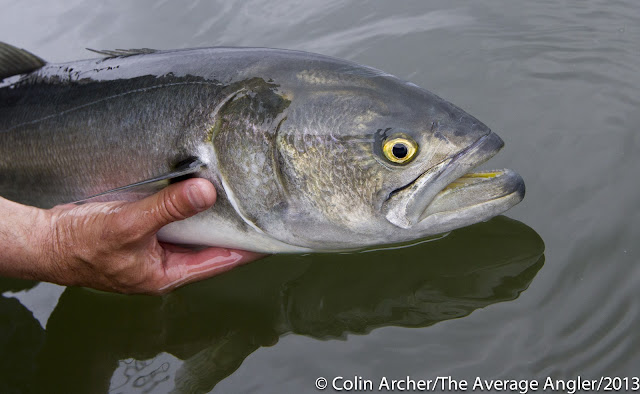 Few things when your fishing for or when the blues fish are around. Number 1- Watch your fingers, arms, and legs. They bite down hard, and then shake their heads. Human flesh won't stand up well with the yellow eyes sharp teeth. A few other things- leave your self tied or $5 dollar a piece Bob's Bangers home as they'll get shreaded. Bring a bite leader, wire, tieable wire, or heavy 50-60 pound fluoro to use as a short bite tippet. A boga grip or pliers will help when trying to get a hook out. You can help your own cause by pushing down the barbs and going barbless.
Bluefish are looked down upon as a nuisance fish mostly by anglers targeting other species like stripers or fluke. They are a blast on the fly rod and can be a fly rodders friend when things are slow or when hunting for bass. The more aggressive blues will be up on top chomping through bait while the lazy bass are underneath or lagging behind picking up the scraps.

It's a great time to try fly rodding from a boat while the bass, blues, fluke and weakfish are still in the rivers. I run 4 hour and full day charters for two fly rodders. If you'd like to get in on the action give me a call to book a trip, 732.261.7291. (It's a great bring your non-fishing significant other trip with usually calm waters and lots of pretty settings and nice houses to view from the water) 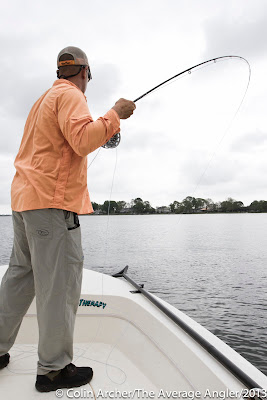 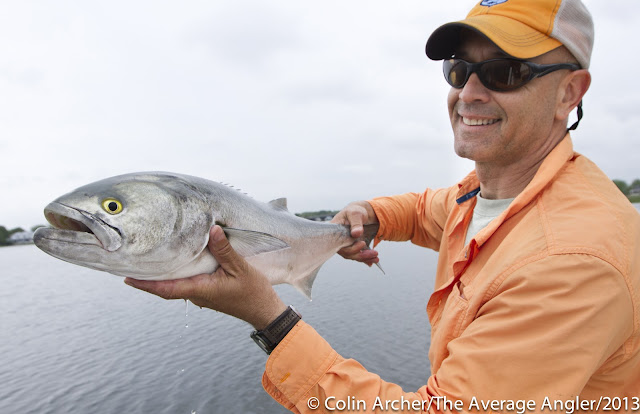 Posted by The Average Angler at 5:18 PM