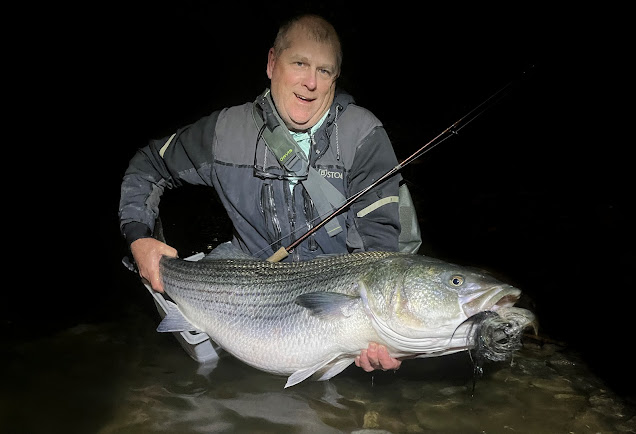 Thankful. Blessed. Lucky. Skilled angler? Maybe a little of all of the above. So the bite is over and now it is safe to make a post. Good last week, really good. Came back from Florida. Made the drive to Monmouth County a bunch of times. Swamped the S.S. Archer in the pursuit of big fish. And then hit landed several big fish, and the above beauty the F.O.A.L. ( Fish Of A Lifetime). 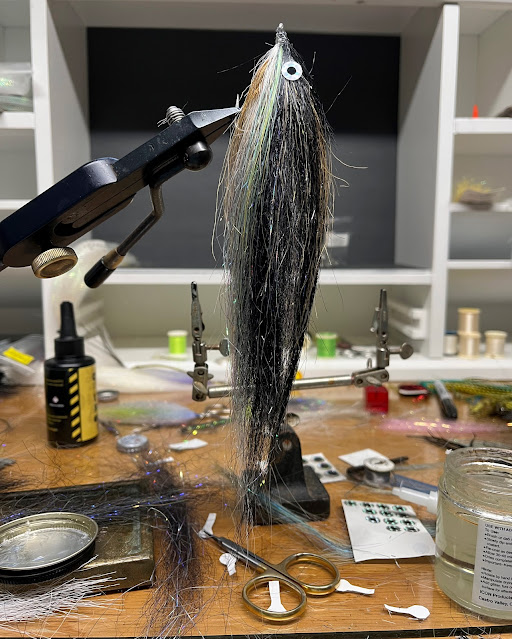 When I swamped my boat I lost my fly wallet and about a dozen of my best ties from the winter. That included some dark ones I had planned on using for the third shift fishing. I made a few and I called the above the "McNasty", and I had it tied in about 20 minutes. Lets just say this fly has been worth its weight in gold. I have tied a few back-ups and they have done just as well.
So about the fish at the top of the page? What can I say. 12 weight rod. 450 gr line. 30 pound flouro leader, and the McNasty. Bigger water. Incoming tide. Big fish chasing herring. Sketchy footing and as long as I cast I could make due to the limited backcast. There were other nice fish, like the one below that came to hand before the big girl struck. For her, it was hit and hook set I'll 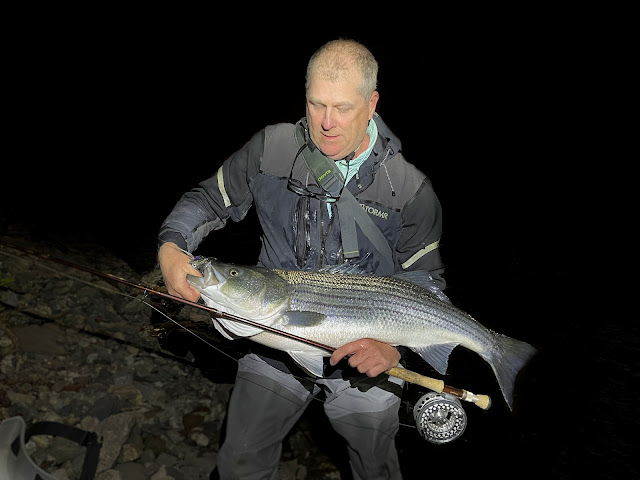 never forget. Big fish in big current with a big goof trying to figure out what to do. First challenge was trying to get off the rock I was on and not break my neck, all the while trying to maintain pressure. It was just locked on me and against her, trying to hold my ground as she held hers, with all her effort trying to just turn a little more into the current or just behind that night rock, where she would surely break off.
I thought the 12 weight would snap. I thought my know would give. Days after this I lost two big fish when my Partridge Predator 4/0 hooks straightened out, something I didn't think would happen at the time. But I gained inches on her, from way down current, and from the backing, to the running line, to the sinking line she came in. Luckily I wasn't alone that night. My buddy Joe was all into it, and excited, as he has watched me come up blank more nights than not when he and the boys were into them good.
The fish was over 40 pounds, even hard for me cradle, so I dropped down into the water for a picture. Thanks to Joe for help landing her and for getting a great picture, which for me, is the picture of a beautiful fish, and one of my time three of all time. The others were 2014, 2018, and this one 2022, so I guess I have another four years to wait to do it again. By then this fish should have worn off. 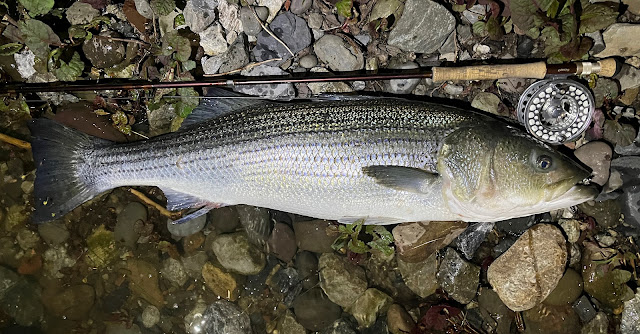 And after that it was nightly changing conditions. Honking wind for days. Cold, that gets into yours bones. Receding water and changing tides all pushed forward an hour or so each day. Throw into that the new moon, with blowout tides due to the strong north winds and each night was unknown until it was over. But there were fish, good ones, that would have made my spring 2022 season, and a three year wait, complete.
Posted by The Average Angler at 6:59 AM