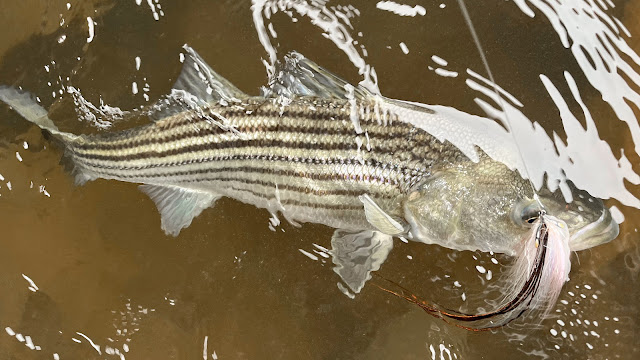 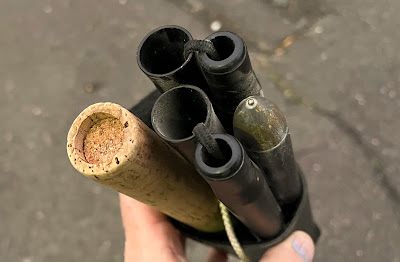 Hit the river at 515 am, few hours left in the outgoing. Had the place to myself except for the boat hatch. Broke out the wading stick, one that Bunky gave me before his move back to Maine. I remember using one when I started trout fishing, and will now use it all the time in the Delaware. The only problem with this one is it's missing the little compass at the top of the handle, I think I'll be okay without it. With the tide still up, but leaving, it came in handy making my way way out to perch up on a rock that I know is there. I landed one small fish before watching as the blueback 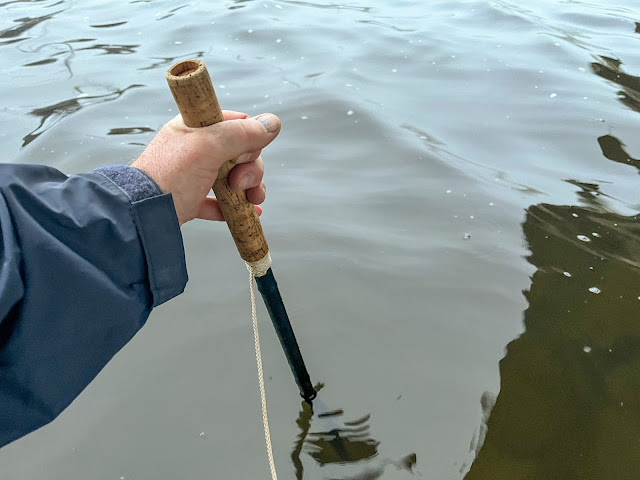 herring were trapped along the abutment with bass on the chase. I hooked and had a nice fish, probably 30 inches, that came unglued as I reached down from the rock to lip it. It stayed motionless in the water fly-free, and I tried to grab it but it slipped from my hands. I believe the herring are 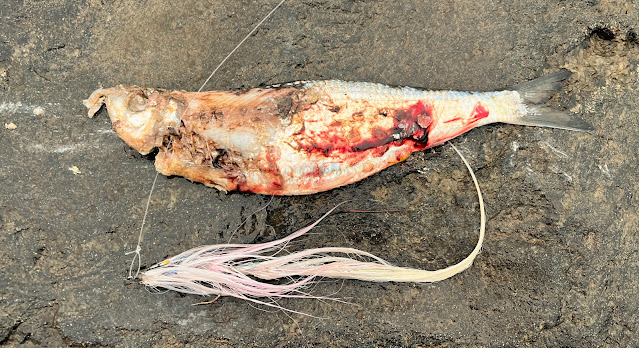 bluebacks now, and these are great because they hang and spawn in the moving and fast water, and the bass lay in wait for them. While my above fly has just about reached the end of service, it opens up nicely in the water and I caught fish with it today. Below is the side by side comparison between the alewife and blueback herring. I stayed way to long, and what made me stay was watching a boat 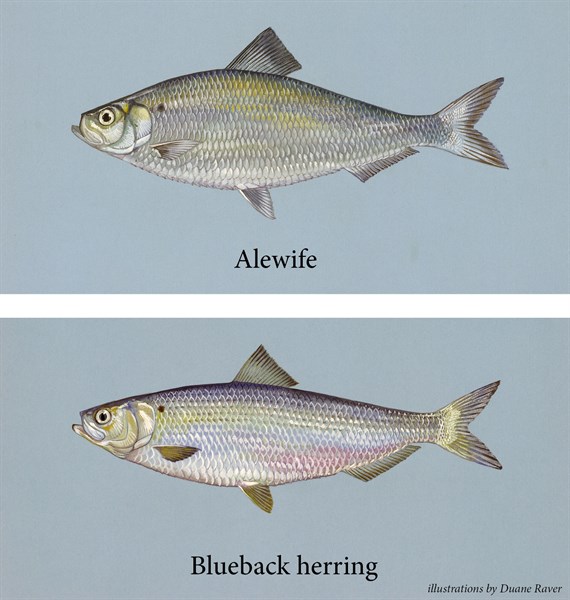 guy hook and land a very big fish, I'd say over 38 inches and probably 20 plus pounds, and that fish didn't make it back into the water. Now from New Jersey to half the river there is no kill in effect, on the Pennsy side to mid river anglers can harvest two fish between 21 and 24 inches, that fish was no where near that, more on that later. But I moved and fished hard walking out and in between the 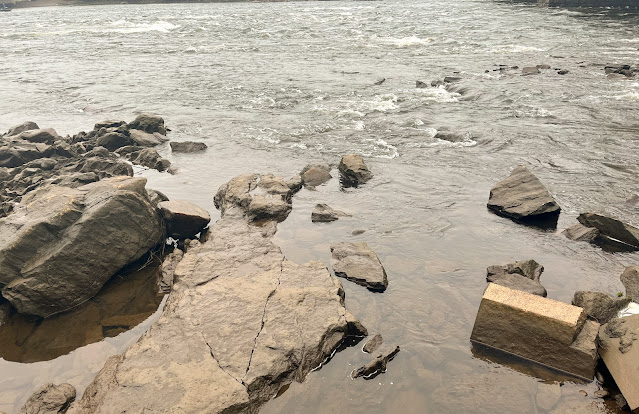 boulders without a hit. I tried a white fly since that is what the boat guys are throwing, shads, and something else if not small plugs. That fly worked for one but not another so I picked a winner out of my supply, which is near dwindled down to smaller flies. This one had some bulk and saddles 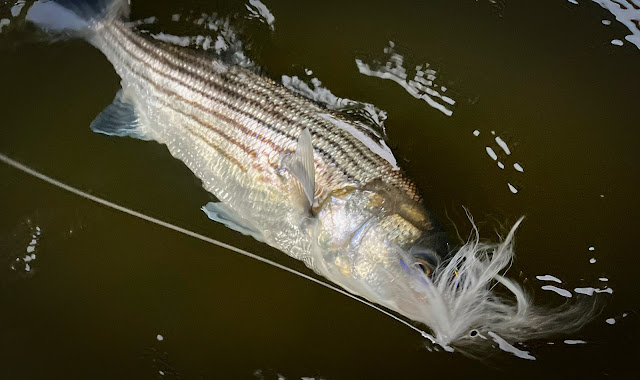 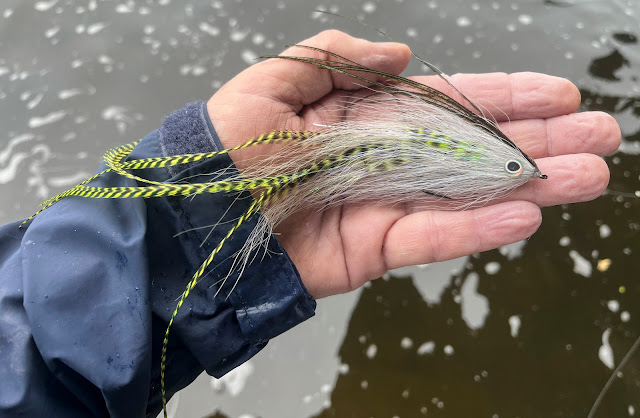 out the back and moved nicely in the water. Two came to hand for that tie, one better than the other. I stayed, and then stayed as the river hit dead low. The problem is the fish are in the channel, and I just get the cast there, and if I do it quickly heads down river. So with my arm blown out yet again I 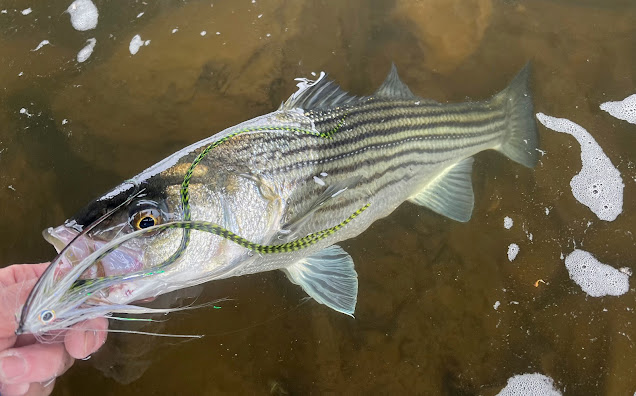 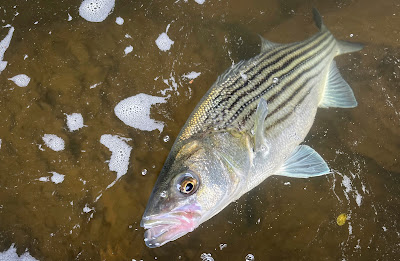 called it a day. when I made my way to my car the game warden was sitting in his truck talking with Trenton P.D. I wasn't going to, but I had to say something. I had taken a picture of the boat and I explained to him what I saw. "I saw it too, and radios my partner and he's down at the ramp. We got him". It's good to see the law out and about, he said he's been working non-stop. One thing, and its fair, but you should know the regulations, is the different rules between P.A. and N.J. for the same body of water. I could see how someone could make an honest mistake, but you gotta know. 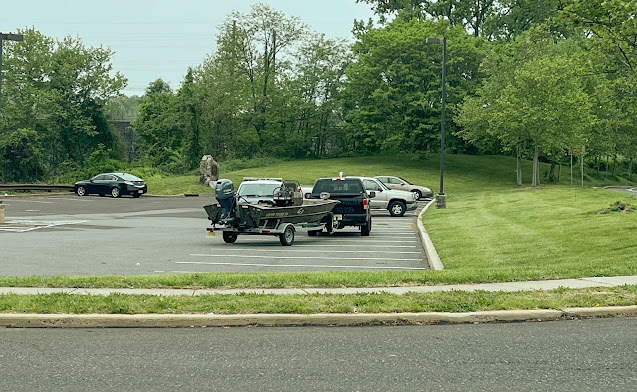 Posted by The Average Angler at 11:00 AM