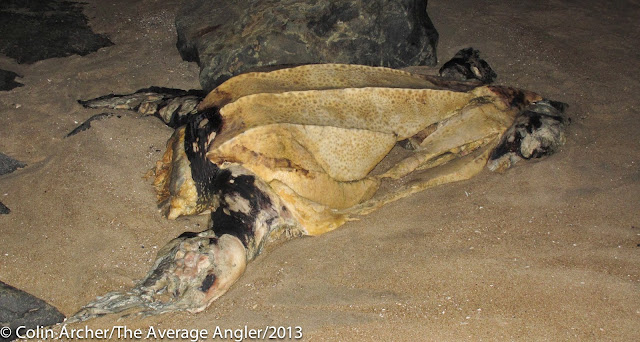 I finally fell asleep when Detroit was leading the Red Sox 2-1. For some reason I woke up at 148 a.m., and I was up, might as well go fishing. I knew low tide was around 215 a.m. out front so I thought I'd give it a go and scout some water at dead low at night. 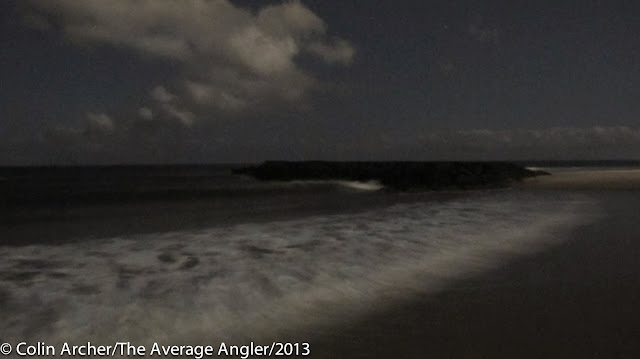 As I made my way down the beach the west wind carried a pretty foul smell into my nostrils. I met another grave yard shift angler who directed me to the source of the smell, a large dead Atlantic Leatherback Turtle. It is the largest of all sea turtles and can grow to six and a half feet and weigh upwards of 2,000 pounds. It is the only sea turtle that lacks a hard shell, instead the body is covered with a layer of rubbery skin with seven ridges (keels) on the back and five underneath. One interesting point is that the primary food source is jellyfish. This information was found HERE. Below is a picture of a living leatherback.

As far as fishing, tough coupla days on the beach. Yes, a northern tip has been producing but I've haven't hit that beat yet. Today was fishing during a high and bright sun, oh, that was the waning full moon, and a stiff west wind. Water was clear and flat and really no signs of bait or bass. I did see a pod of mullet swimming happily along as I stopped and peered out on the water. There was also a lot of birds on boats, actually boats on birds, and what looked like big blues running through bait.

Tuesday will be the next available boat day so if you, or you and a friend, want to go out and find and chase some bass and big blues give me a call 732.261.7291.

Posted by The Average Angler at 12:31 PM