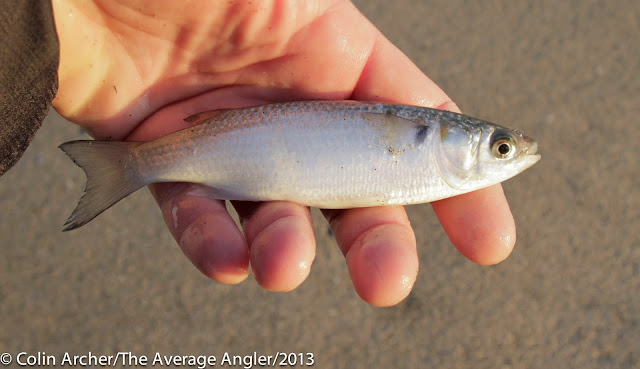 This morning I was scheduled to take out a client. We touched base yesterday and decided to push back our walk and wade trip a week or two. We wanted to fish after this weeks full moon and give the bait and bait a chance to hit the beaches.
Well today the bait was ON the beach. My buddy Al always says, " Colin, the mullet usually show up on the 15th of September." Well, after looking at the above picture I think he was dead on. FYI- today is September 15th. Not that this is the first showing of mullet, others have seen them for a few days to a week, but it's the first time I've seen them, and on the stretches I usually fish.
Not only were the mullet in the waves and making their telltale wakes along the beach, but small bait, looking like bay anchovies, was also getting skittered along the surface.

It was a little rip out there this morning and at 430 am the temperature inland was 50 degrees. The water was flat and I tried to pop up a bass in the dark and then as first light arrived. There were several anglers out as the last minute fluke fisherman tried to get a keeper or two before the season closes September 24th.
As the light came on you could see the mullet along the beaches. Where I was there were no fish on them. In a way I am glad because I would have sick after postponing todays trip. I switched the fly rod for the camera and looked for an angle where I could catch the waves backlit showing the bait. It took a bunch of frames but I got a few that look pretty cool. If you fish sun up there's nothing like seeing this and a blow up or swirl in the school of bait. Then it's a delicate cast and a few strips and WHAM!, at least some of the time.

I'm back off to the Adirondacks today finishing up the move of our "stuff" to the Roscoe house. I wish I was going to be out tomorrow but I'll have to take a break for a day before some walk and wade and boat trips which start steady this week.

Posted by The Average Angler at 9:29 AM