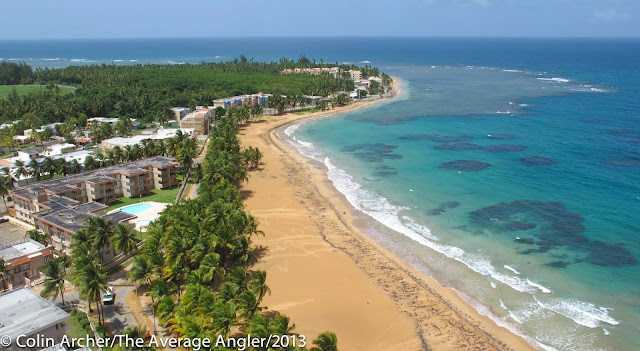 Just got back from an absolute perfect weeks family vacation in Luquillo, Puerto Rico. Everything was fantastic. Flights, rent a car, condo, weather, food, excursions, kids, well almost- except when we dragged them through Old San Juan, - were all great.

Since this is a fly fishing blog I'll tell you about that....there was none. 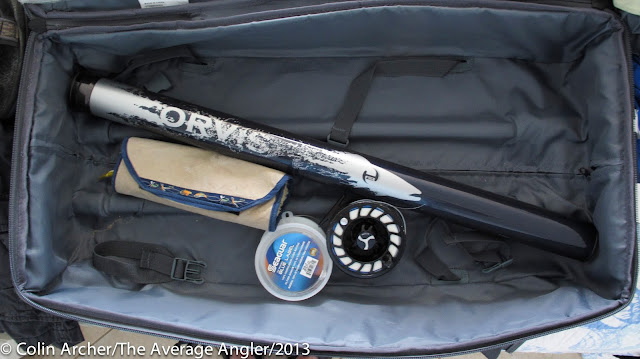 I had packed a rod, reel, some flies and leader material thinking that I might go fishing. I even called a charter captain while down there and talked with him about tarpon on the fly. I thought about just going
out and casting, but, you know what, I just didn't have any desire. They never left the bottom of my suitcase.

Our vacation was filled with excursions ( with most $100 per person, and there was six of us! ) and adventure in and around the Luquillo mountains and beaches and El Yunque Rain Forest. It was all family all the time and that was fine by me.

What's funny is that, and I'll delve into it in another post, is that I just don't like fishing away from "home". That being the Jersey Shore salt and the Upper Delaware. I have had opportunities to fish other places for short periods of time or just a quick one dayer. Those do nothing for me. I'll have to do some thinking and figure out why that is.

But still on fishing. I did take time for myself and read two great books while away. Striper Wars by Dick Russell and Striper Moon by J. Kenny Abrames. 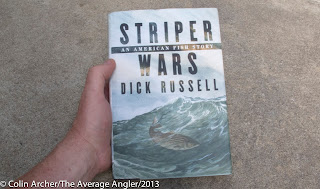 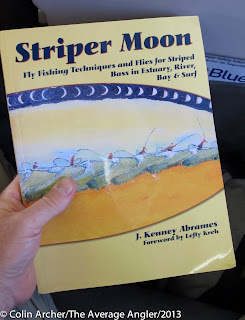 Now back to the trip. Two adults and four of the five kids ( ages 8, 15, 16 and 17 were here the oldest away at post graduate school ) made the trip while Lola our dog stayed at a sitters house for the week. 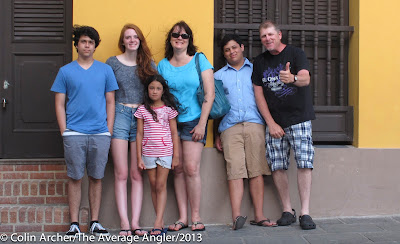 The beaches were beautiful and we swam and snorkeled and saw tons of fish and found all kinds of
coral and shells and a conch. We even found an octopus which was really cool. 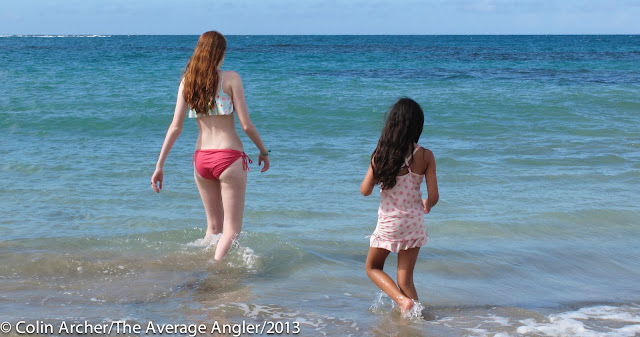 We ATV'd at the base of the rainforest and had our faces painted like the tainos (indigenous people of the Caribbean including Puerto Rico) that inhabited the island before the Europeans came. 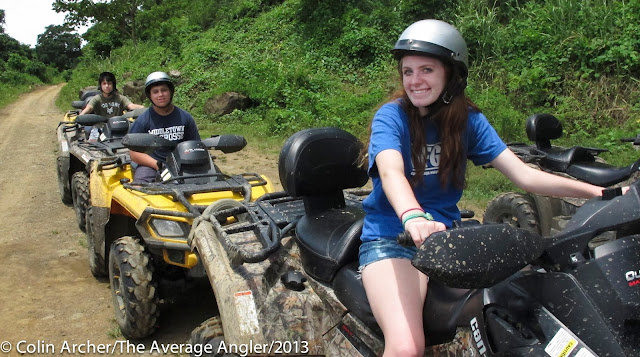 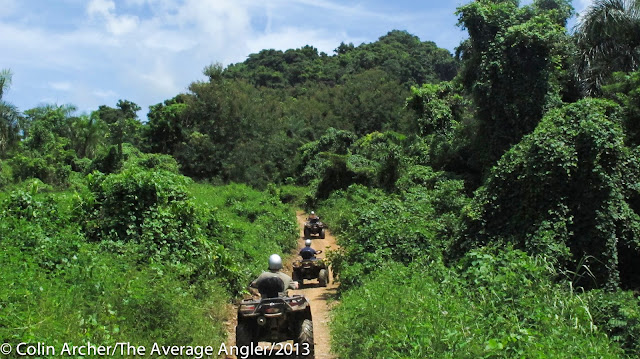 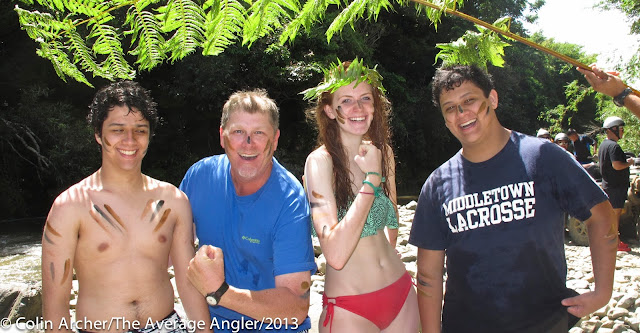 My youngest and I took a boat and snorkel excursion that ended on the island where the last scene of Pirates of the Caribbean was filmed. This was real snorkeling in crystal clear water with tons of fish and coral......any reefs that are accessible near the islands public beaches have been so picked through there's hardly anything compared to offshore. I have no snorkeling pics because I forget the waterproof digital camera so I had to shoot film! I'll have them in a few days. 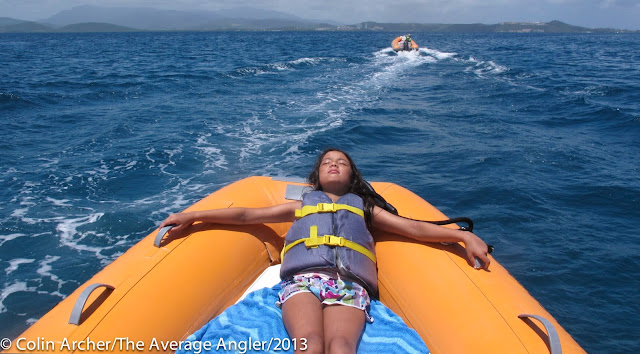 One thing that I may reccommend is apply sun block liberally to your back and the back of your legs...they get exposed to the sun for hours as you're looking down...yes it hurt! 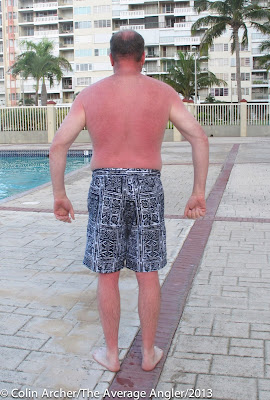 We ate so much and so many good meals....mofongo, black bean soup, skirt steak, wings, burritos, mahi, scallops, pastellas, tostones, plaintains, and a host of deserts including quatro leche something or other. Below is a stuffed red snapper that I had at MetroPol one night. 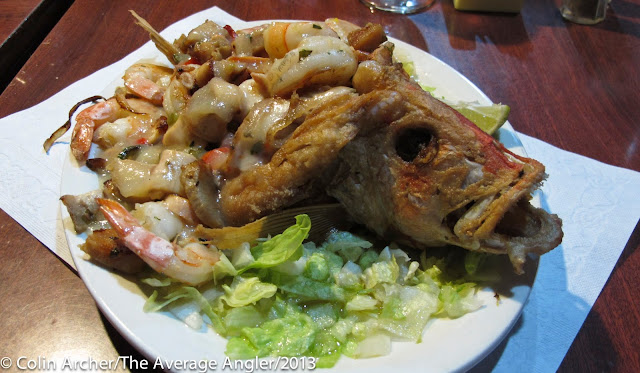 The big kids and I did a zipline tour which was great. They start you off easy and then it's a hike to some taller and longer ones before a rappel out of the tree. We all had a blast. 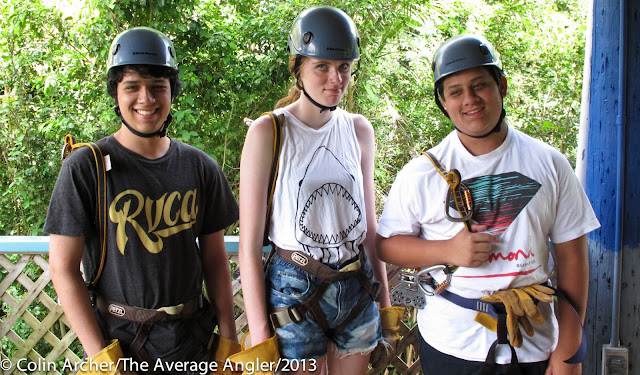 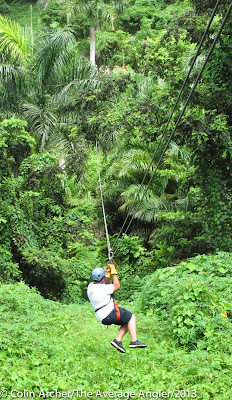 One of the most fun things was trying to spot and catch the HUGE iguanas that sun them selves in the trees. We searched for hours over several days and gave climb and chase but came up empty. 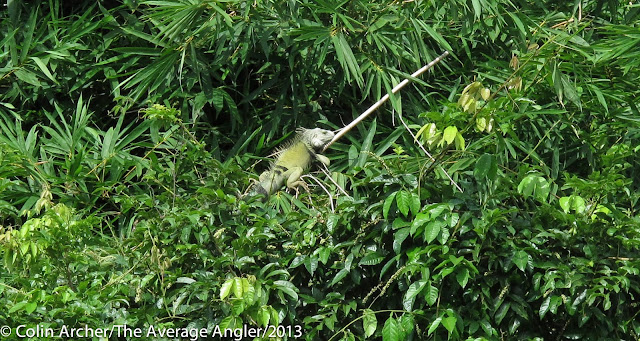 And lastly we hiked to La Mina, the waterfall in El Yunque where, of course, the two oldest just had to climb and sit on top of the waterfall, much to the amazement of the small kids visiting the falls that day.
As a parent, you want to see them do it on one hand, and then on the other you want to yell at them to come down. You can see them at the top right of the falls. 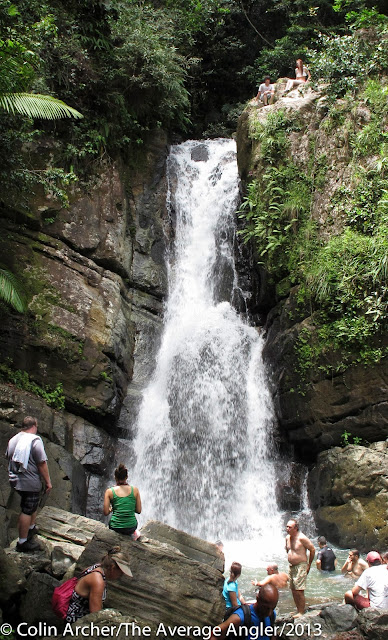 Below mom and daughter hit the beach on our last morning. I was able to shoot this picture from our 22nd floor balcony that ran the length of our 3 bedroom/ 3 bath condo. It was a great place that I highly reccomend. You can see it HERE. 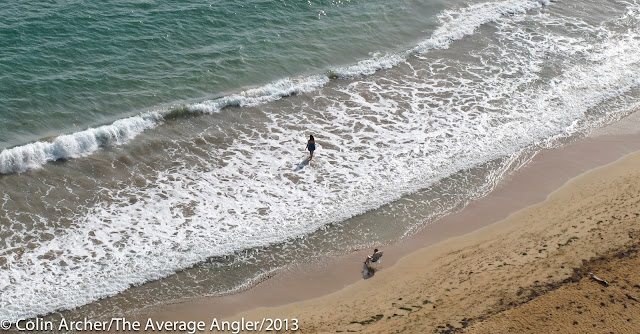 With Labor Day today the crows and traffic will die down. Soon, in a week!, the younger kids will get back to school. And soon, fall will arrive and the small fish and big fish will collide on their migration south.