06.24.13 Why did I leave the Upper Delaware to look for stripers down the Jersey Shore? 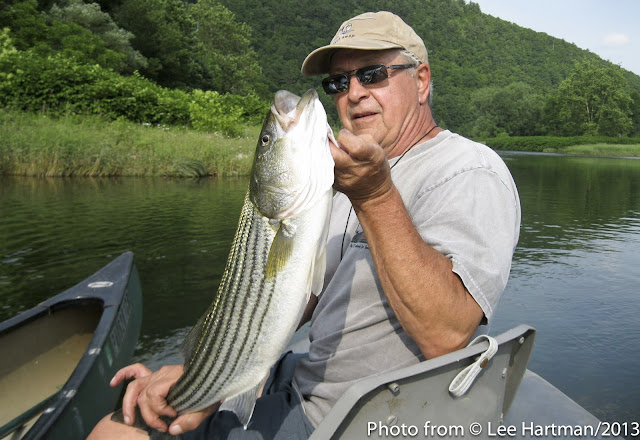 With my trips on the Upper Delaware done of Friday I came home to New Jersey late rather than staying up in Hancock. I was looking forward to getting out in the salt water along the Jersey Shore looking for striped bass.

Who knew? I should have just stayed and the fished the Delaware River near Hancock.

On Sunday night after writing a blogpost I surfed on Facebook. I was surprised to see a post from long time Upper Delaware angler and guide Lee Hartman. His post included a picture of an angler holding a keeper sized (+/- 28") striped bass caught yesterday June 23rd near the Lordville Bridge on the Delaware River. The Lordville Bridge is located about 9 miles downriver from Hancock, New York. 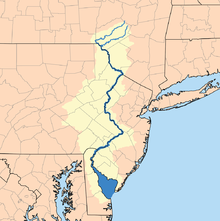 So let's figure out how far our striped bass may have traveled, and when he may have entered the river. The Delaware River Basin Commission (DRBC) is one of the agencies that use a mileage system on the Delaware River. It was adopted with "Mile Zero" being the mouth of the Delaware Bay, a point between the Cape May, NJ light and Cape Henlopen, Delaware. It is the line where the Delaware Bay meets the Atlantic Ocean. That is 0, like Exit 0 on the Garden State Parkway.

So we know that this striped bass was caught near the Lordville Bridge which is at mile marker 321.6. It traveled ( maybe, see below) 321 miles since entering the Delaware River sometime in late March or early April. A 28" striped bass is 6 years old and weighs between 8-12 pounds with the average being 10 pounds. At six years old the male striper is sexually prime and will spawn with bigger females that enter the river. He will eat river herring and or shad that has also entered the river to spawn.

Most males will fertilize a big females eggs and unlike his date who heads downriver after depositing her eggs, he'll wait for another round of females to come up river. Younger males and females may summer over in their natal rivers until they become sexually mature and then will make the trek up and down, maybe producing eggs that are reabsorbed rather than deposited and fertilized by the males.

One question that always comes up is how do the striped bass survive in non-salt water. The other question is how far does salt come up the Delaware River. According to the DRBC website the "salt front" or "salt line" is where there is water with 250 milligram per liter chloride concentration. The current salt line location is at mm 65, and the record upriver location was at mm 102 which occurred during a drought year in the 1960's, some 30 miles downriver from one of the primary spawning grounds for spring striped bass. Striped bass don't need to spawn in the salt line, but do need tidal flow. Striped bass generally prefer to spawn in totally fresh water, or little to no salt water 0-02 ppt. (Murphy, Fly Fishing for Striped Bass pg 71) The eggs need to remain buoyant in order to float and make their way towards sea.

So, the above scenario works if you are under the belief that this or these striped bass are coming from the Atlantic Ocean. After reading this blogpost, Joe D gave me a call. Joe D as you might know him is Joe Demalderis, long time Upper Delaware guide that operates CrossCurrent Guide Service. He came up with an interesting scenario. He has noticed that the prevalence of striped bass sightings and catches has increased markedly since the recent floods, especially after the 2006 flood. He believes the bass are from Lake Wallenpaupack in PA, where true and hybrid stripers are stocked, or, if hybrid striped bass, from Swinging Bridge Reservoir in New York, via the Mongaup River.

His angle on it makes perfect sense. During the floods the water was pouring over the top and the flood gates were wide open. Fish of every stripe (sorry) eventually found their way into the Delaware River, where some may have acclimated themselves to the river conditions and thrived. So, the Lackawaxen River is at mm 277.70, which is 53 miles to Junction Pool in Hancock.

The only way to ever know would be to tag some fish caught up in the Upper Delaware or take otolith and scale samples for DNA testing.

Last summer when I worked at the Bill Canfield Fly Fishing Camp in August the word out was that stripers were in Junction Pool in Hancock terrorizing the brown and rainbow trout that call that pool home. I went down at night and threw a popper for hours trying to get one to bite but had no luck.

This bass that was caught yesterday, wherever it was from, was planning to spend a summer in one of the deeper and cooler pools picking off trout at night as they eat spinners or in the early morning as sip Tricos.

I have to put Junction Pool striped bass on my bucket list. That would be a hoot!


Posted by The Average Angler at 3:31 PM