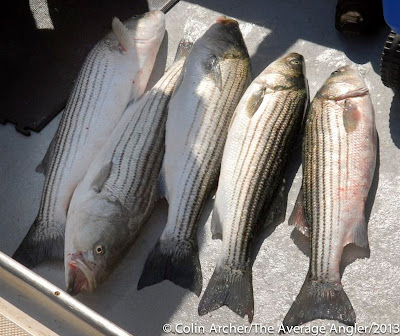 I thoroughly enjoy fishing for striped bass. As you know, I also thoroughly enjoy releasing them as well. I have been drawn to the conservation side of the striped bass and this time of year is always a time of love and hate. I love when the fish arrive and I hate to see so many of them harvested, especially the larger females. Not only do I see it on the beach and boat, I read and see about it on Stripers Online, BassBarn, New Jersey Hunter, and the Hook, Line and Sinker section of the Asbury Park Press.
Over the last two years I was part of the historic reduction in the menhaden fishery catches. When I say I was part, I got involved. I educated myself, wrote letters, went to public meetings, stood up and spoke, and even went down to Washington for the vote. I feel that the striped bass fight is drawing me in.
One thing I hate about all of this stuff is the absolute disrespect that each side has for the other sides view (with any issue) and the politics involved. I respect another persons opinion weather it is the different or the same as mine. As far as striped bass catch and release? I am in a growing minority but it's a position being taken up by many anglers. I am a fly fishing guide that runs beach and boat charters for striped bass, bluefish, fluke, and false albacore. When it comes to striped bass- it's purely catch and release. Catch and release just like when I guide for wild trout on the Upper Delaware.

Most of my fellow guides and friends fly or spin fish. Some use plugs, metal, rubber, clams, bunker, sand fleas, eels, whatever. Most will release most and keep a fish every now and then ofr themselves or their clients. Other captains I know seem to put everything legal in the box. I'm not a tree hugger. I still like them and people in general. I still can say "Nice catch"...although seeing the bigger fish caught and kept does bother me. But hey, truth be told. They aren't breaking any laws, they are fishing within the guidelines set by the state of New Jersey, or the ASMFC, or another Federal agency.

Within the last year I have really soured on striped bass fishing tournaments. I believe that bounties for big fish, for cash, angler or club bragging rights, isn't a good idea. Fish get taken so they can weighed for the tournament. That is not to say they are all wasted. Some fish are donated or brought home for the table. But say an angler may take home a 28" fish for his family for dinner. On this day he or she goes out in early June and catches a 40 pounder. If not for the tournament that fish may have been released and a smaller fish harvested for the table. Not if there's an active tournament. It's taken, weighed, and then donated, eaten, or given away.

All of this has brought me to thinking- "Are we harvesting too many fish?" "Am I taking a position I really don't know that much about?" "Are all those anti catch and release anglers correct?" Let's look at some hard numbers. The Atlantic States Marine Fisheries Commision (ASMFC) has managed striped bass since 1981, part of the Striped Bass Interstate Fisheries Management Plan. They do stock assessments and set the allocations of commercial and recreational harvest for each state. In the year 2013 the ASFMC allocated New Jersey with 321,750 pounds of striped bass. Since N.J. doesn't allow commercial fishing, netting or sales of striped bass all of the 321,750 pounds can be harvested by the recreational fisherman. And just an FYI, for all those anglers that cry it's the commercial fisherman killing all the bass, here's some numbers. In 2011 32.2 million pounds of bass were harvested along the Atlantic coast. That's 3.178 million striped bass. The commercial take was 19% or 6.8 million pounds, the recreational take 81% or 26.3 million pounds. So we know. 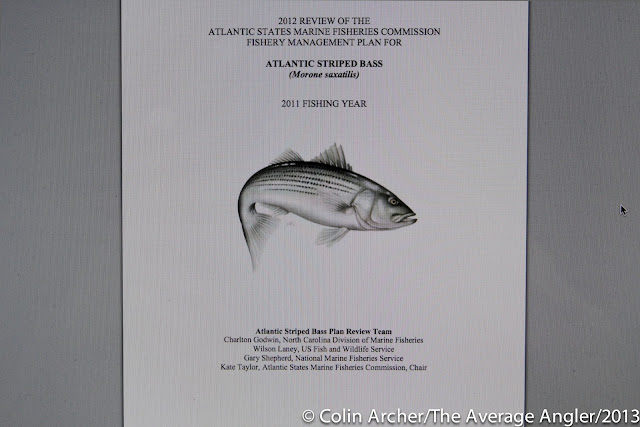 Since New Jersey doesn't have a commercial striped bass fishery they instituted a Striped Bass Bonus Program (SBBP) which allows anglers to apply for a bonus tag to keep a third striped bass over 28. So if you apply for a tag, and then go fishing, you can keep three striped bass over 28". Then you can go home and file a form and then apply for another one and do it again, the next day, and the next day, and so on. The idea was that since there's no commercial take they would allow recreational anglers to harvest more. 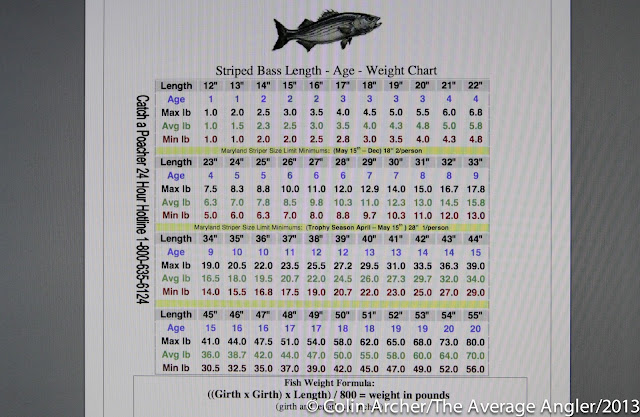 Looking at a size/weight chart for striped bass lets pick an average size fish that New Jersey anglers might keep. With the minimum striped bass at 28", average weight 10 pounds, and the heaviest 50" which is 50 pounds, we'll say that in New Jersey during 2013 the average fish kept was 35" and 18 pounds. Really that means not one fish over 35" was taken.

Let's now say there are 30 days in each of our fishing months. Now we take our 2,979 striped bass and divide that by the 30 days. That comes out to 99.3 striped bass per day. So, during our make believe six month fishing year of 2013 we can harvest 100 striped bass per day at 18 pounds ( some will be lighter and others heavier but the average 18 pounds) and be within our 321,750 allottment.

100 fish per day. That means on a given day if we logged all of the striped bass harvested from the Delaware River and Bay, Cape May, Mullica River, Absecon Inlet, Ocean City, LBI, Island Beach State Park, out front, in the back, Oyster Creek, Jetty Country, Sandy Hook, Raritan Bay, Raritan River, Hackensack River, and anywhere people fish for and potentially harvest striped bass- it can't average more than 100 fish a day for six months.

Remember- the above is only for the state of New Jersey recreational fishery. Think of all the other places the striped bass get fished heavily- commercial fisheries in North Carolina, Chesapeake Bay, Jamaica Bay, Montauk, Rhode Island, Cape Cod, and the rest.

"Hey all!" The striped bass, and the people who love to fish for them, will all be in trouble soon. There will be a moratorium soon if we don't smarten up. The moratorium will stop the bleeding, is there's any more fish to bleed out.

You can read more on the ASMFC on their site HERE, go to the striped bass section.


Posted by The Average Angler at 1:30 PM