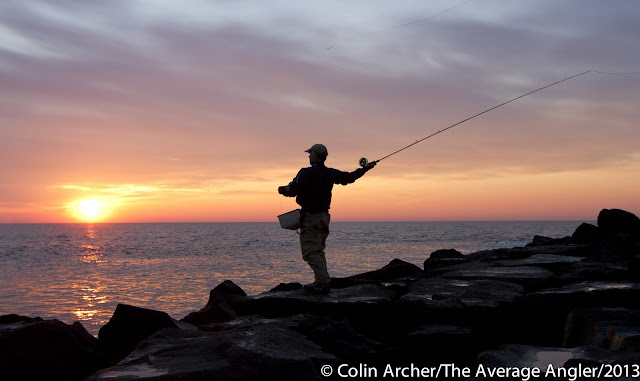 What a way to start Father's Day. Fished the rocks with Rich this morning and we casted flies as the sun rose on the horizon. A west wind had the water flat and there were no signs of bunker until the boats made their way out and made circles around them off Loch Arbor and Asbury Park. As I write this shortly before 8 a.m. the clouds have rolled in the skies to the west have darkened.

I guess it's fitting that a dad gets what he wants to do for Father's Day, the same for the moms on Mother's Day. Two things I noticed and heard from the dads that I talked with this morning. First, I noticed all of the dads were fishing alone. Dad's weren't with their own dads or their kids. It was just dads getting out to fish a little before getting home to celebrate the day with their dads or kids. Maybe its different on the boats, but the surf guys were all rolling solo this morning. The second thing I found was that the guys all had plans that involved their families. They talked of breakfast, brunch or a barbecue later in the day. Rather than say "Hey, it's Father's Day, I'm going fishing all day!", they, we, just tried to squeeze a little in before spending the day with family.

I am blessed to have five "kids" that I call my children. I had a part in bringing three into this world and for the other two I am filling in after their dad moved on from this world. I have always said, "I didn't make them, but I'll take them." When I ask people about these two beautiful girls, "Don't they look like me or didn't they got their smarts from me?", the answer is always, "No".  Okay, we can credit their dad (and moms) for that.
My brood is 7, 15, 16, 16, and 27. It is fun to watch them grow up and enjoy life and find themselves along the way. Each one of them brings happiness into my life and I love to watch them from a distance or spend time with them one on one, although that "time" thing is different these days. "Time" used to be playing catch, working around the house, even hanging out or watching TV together- but life and kids, and parents, have changed. I have to thank cell phones, computers, technology and the fast paced world we live in for that. Times were simpler, and simple times made for lasting memories from everyday events. Although, I have to say, 7 year olds will still do anything to just be with dad! Teenagers, not so much.

So, to my own dad, and all the dads that read this Happy Father's Day! Everyday I am proud to be a father, but on Father's Day I have a little more pep in my step because I know I'm doing a pretty good darn job at it! (If I can say so myself)
Posted by The Average Angler at 8:20 AM